A Mustang as the most important new green car of the year?

That might have been our reaction prior to the past few weeks. Ever since our editors started jockeying for first-drive opportunities with the 2021 Ford Mustang Mach-E, it’s beelined to become our unanimous winner. And yet simultaneously, we all seem a bit surprised that it’s this good.

Its reveal in November 2019, practically next door to Tesla’s Hawthorne design center, generated buzz with enthusiasts, but as Ford started trickling out more details indicating that it was taking this model seriously, and that it wasn’t just a special project for EV enthusiasts, our interest grew.

The Mach-E calls together an intriguing set of influences. It would offer versions with an actual EPA-rated 300-mile range, have full-vehicle over-the-air updates, and would be one of the debut vehicles for a driver-assistance system (called Active Driver Assist) with the potential to rival Navigate on Autopilot. Its new vertically oriented version of Sync gives lots of interface options. After spending time behind the wheel and around the Mach-E—once we filter out our thoughts about the prancing-horse logos everywhere—we call it better-looking and better-driving than the Tesla Model Y. Some of Ford’s top engineering talents were involved, it turns out. Further, its cabin materials aren’t just from the parts bin, and the general sense of quiet and refinement—”hardware” pieces that Tesla can’t change with a simple update—are a notch above what Tesla offers in the Model Y.

It’s the past, present, and future of the automobile, all wrapped in one. The past for the pony-car heritage and design continuity everyone recognizes; the present for being widely available and supported; and the future for its fully electric propulsion and connectedness.

Not a Tesla-trouncer, something better

The Mach-E isn’t the cliched Tesla killer. Instead it’s definitely the sweet spot for many Americans who want an electric car but just don’t see themselves in a Tesla. It has charm, and yet it’s hard to find serious flaws—truly an unusual combination in the world of cars. 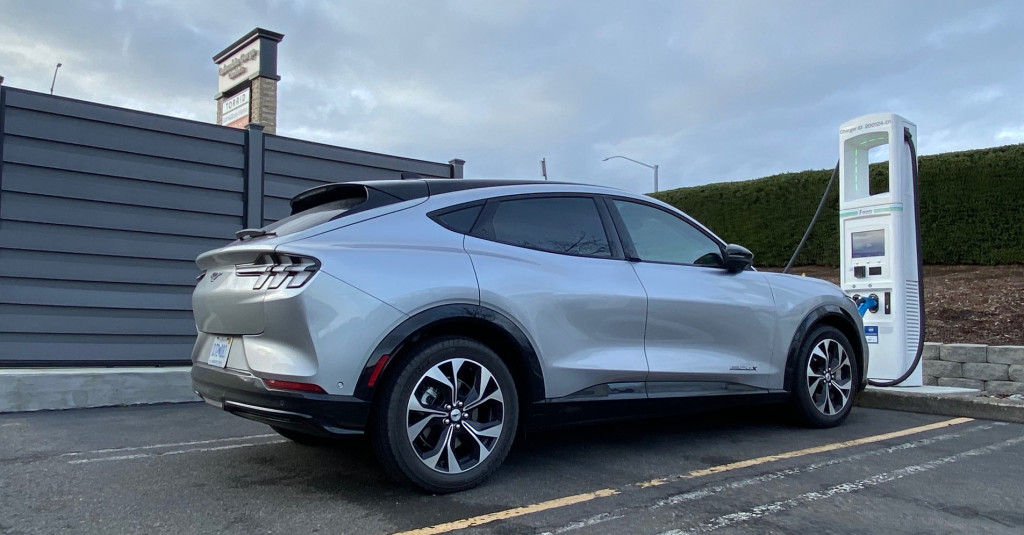 Yes, we know there are things that Tesla does better. Ford says the Mach-E can gain up to 61 miles in 10 minutes on a 150-kw fast-charger, while Tesla has said that the Model Y can recover up to 168 miles in 15 minutes with its V3 hardware. Furthermore, the Supercharger network is still far better for road-trip fast-charging than what’s out there in the CCS format, but Electrify America, EVgo, and others are collectively gaining on that advantage.

And the sheer physics of Tesla’s efficiency accomplishments can make the Mach-E look like a low achiever. The Tesla in dual-motor form makes 326 miles of usable range out of 75 kwh of usable range, while the Mach-E in the equivalent form goes 270 miles from 88 kwh. But we have to believe that Ford will make gains on this with over-the-air updates in the near future.

A different flavor of electric

As we’ve revisited most of these finalists in recent weeks, each one has a different character. The companies behind them have made decisions about performance, charging, and interface that result in an experience that you wouldn’t mistake for another.

The Model Y delivers on many of the same virtues as the Model 3, and it takes that model’s stellar efficiency and performance into the most popular segment of the American vehicle market. Although it arrived early, it arrived missing the sort of surprise advances over the Model 3 that we just assumed were on the way. The Polestar 2 feels conceived by a team that paid the utmost attention to cosmetic and performance details and rings truest to the premium European performance-car paradigm. The Volvo XC40 Recharge woos families who want comfort, understated luxury, and a uniquely Volvo aesthetic. And the Toyota RAV4 Prime goes after the heart of the market, pairing high-mileage hybrid operation with enough electric range to enable tailpipe-emissions-free driving most days.

The Prime might also have been our winner this year, had Toyota committed to build as many of these as shoppers want. In 2019 Toyota sold nearly 450,000 RAV4 models, with the RAV4 Hybrid making up more than 20% of that. We couldn’t get past what seems like a puzzling oversight—that Toyota would think less than 5% of RAV4 shoppers would want a quicker-accelerating, better-performing version that offers a lot of the wow factor of a fully electric vehicle.

That represents an opportunity in the coming year for the Volkswagen ID.4, which targets ownership costs and mainstream models like the RAV4, to conquest RAV4 owners. As we covered in a look at what didn’t quite make the cut this year and why, the ID.4 wasn’t on this year’s shortlist because of timing.

No compliance cars or narrow niches

Availability and scale definitely plays a role in our decision. Polestar is treating the Polestar 2 as a niche car in the U.S. so far, with limited availability focusing on major-metro areas and without U.S. availability for the affordable versions offered in Europe. And while the XC40 Recharge is a compelling urban crossover that points to the future of Volvo, its combination of its size, its price point, and its close resemblance to the gasoline XC40 suggest a cautious entry to EVs that might not be prioritizing the U.S. as much as it could. After a first drive, we remain convinced that Ford will easily sell all the Mach-Es they can make—which based on what the company had said previously is only in the range of about 50,000 in the first full year of production, with about half of those headed to the U.S. Will this prompt Ford to make more? Officials haven’t yet committed to raising the production numbers beyond that and haven’t confirmed whether a second electric model due from the same Mexican factory will chip into that total.

How committed is Ford? The company now benefits from the environmental vision of executive chairman William Clay Ford and a genuine enthusiasm for electric performance from new CEO Jim Farley. The company has been pointing to its voluntary deal with California for stronger emissions standards that would encourage more EVs. It’s also started revealing more about an entire set of electric vehicles for affordability and cost of ownership—including E-Transit electric vans, an all-electric version of the F-150, a project with Rivian, and several other EVs set to arrive by the middle of the decade.

Across our editorial group, editors who aren’t necessarily sold on Tesla’s vision of the future saw the light with the Mach-E, and even in the midst of a pandemic, the Mach-E drew gawkers in our parking lots and driveways—more so than any other EV we can remember. Some of Ford’s ancillary efforts, including taking an extreme-performance version to NASCAR infields, seem part and parcel to the mission. The Mach-E’s launch could cue a psychographic inflection point in the development of the electric car, and its influence on EV adoption may far exceed what the production numbers suggest. Making it a Mustang was smart business for the company and for clean air