The yoke is most definitely no joke. Some or all of Tesla’s first 25 deliveries of 2021 Model S Plaid sedans on Thursday evening featured one of the automaker's most controversial details: the yoke-style steering wheel.

The feature set off plenty of debate when it was revealed in first photos of the Model X Plaid and Model S Plaid in January. Although it was expected to join the lineup at some later date—when it had been given more of a third-party safety blessing, perhaps—there it was, in the first models built for sale.

Earlier this year, the yoke surprised everyone—even U.S. regulators at NHTSA, who told CNET then that it "cannot determine if the steering wheel meets Federal Motor Vehicle Safety Standard." Then in March it released a statement confirming that it was "actively engaged" with Tesla.

Now NHTSA is unwilling to confirm whatever might have resulted from those discussions with Tesla—potentially suggesting that they're ongoing.

The agency reminded Green Car Reports Friday that current federal FMVSS standards don’t prohibit what the federal government calls “non-circular steering controls.” NHTSA also said that manufacturers are responsible for certifying compliance and ensuring that vehicles meet all safety standards. And so Tesla would have had to go through some extra due diligence in assuring the design met the same safety needs.

In addition to the obvious questions about how to turn the steering wheel rapidly at parking-lot speeds, or what happens if power assist fails (a realistic concern if you look at recall campaigns), it still begs a lot of questions. Most notably, how will airbags deploy? Driver-side frontal airbags have a different design than those on the passenger side, in part because while a pyrotechnic device provides the initial inflation and impact support, the steering-wheel rim helps maintain the bag’s location for secondary loads. 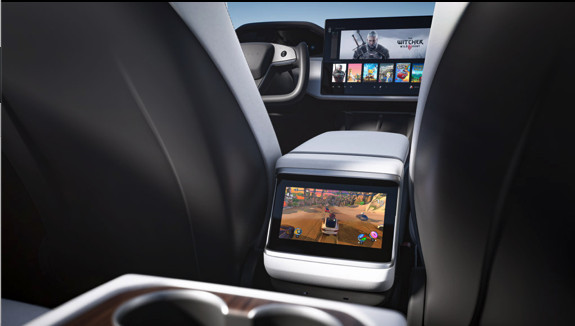 The kinematics could suddenly be quite different. An engineer at a German automaker that used to stand out for its particularly large steering wheels told me in 2016 that changing to a smaller-diameter steering wheel involved such a level of safety and durability retesting that it might as well be saved for a new body structure.

In the presentation of the Model S Plaid, Musk pointed to the unobstructed visibility of the gauge cluster and the road ahead. The “stalkless” layout also omits turn signals (moved to steering-wheel buttons) and the shift lever (now tied to Autopilot).

IIHS spokesperson Joe Young said that the IIHS “doesn’t have any relevant research on a yoke-style steering wheel like this,” and thus couldn’t offer anything on the safety implications.

It appears that Tesla made these early deliveries to a combination of employees and high-profile Tesla fans—a forgiving group, and one likely to be far more positive about the yoke.

Tesla might need the power of its influencers on this one. In February, Musk told Joe Rogan that “they use a yoke in Formula One.” Not even Rogan seemed to be convinced; and you don’t see F1 drivers needing to maneuver around driveways and parking spaces.

Green Car Reports has reached out to Tesla for clarification on whether customers have a choice between the yoke and the steering wheel. Tesla’s order tool for the Model S doesn’t indicate a choice, and all of its photos currently indicate the yoke setup.

Tesla shows no lack of willingness to innovate on its initial Model S formula. But look for more later this year as U.S. safety agencies, Consumer Reports, and other publications—us, perhaps—get some firsthand experience with this outside of the Tesla-fan circle of bliss, and whether it looks like the future or not.

2022 Audi A3 and S3 return with improved engines and technology