Mercedes-Benz showed off the new electric vehicles that will help it become an all-electric automaker by 2030 this week at the IAA Mobility auto show in Munich. Mercedes debuted the EQB electric SUV, EQE electric sedan, and EQG concept SUV based on the G-Class. Those vehicles will join the EQS flagship sedan and EQA small crossover already planned for the U.S. as 2022 models.

In all, Mercedes plans at least 10 electric vehicles built on three electric platforms in its EQ family to be sold globally. By 2025, any new vehicle planned by the German luxury automaker will be built solely on an electric vehicle architecture, Mercedes explained in July. That includes everything from small cars to commercial vans, though legacy architectures supporting internal-combustion engines may still be produced.

Here's a brief overview of the new and known members of the EQ family coming to the U.S. in the next few years. 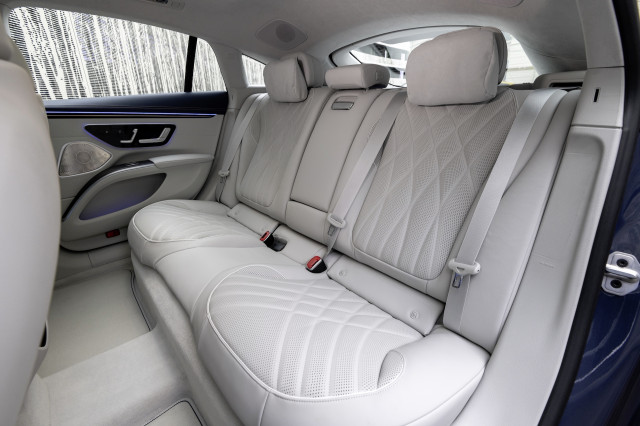 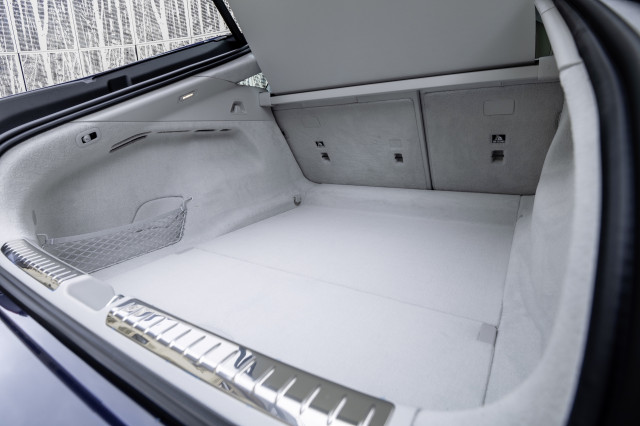 The electric version of the S-Class will compete with the Tesla Model S. The EQS has a short nose, a long arcing greenhouse, and a bulbous rear that looks nothing like the stately S-Class sedan. Inside, a 12.8-inch touchscreen and circular vents on base models look familiar, but on higher end models the cluster, stack, and even passenger-side dash glow with a single pane of screens called Hyperscreen that spans 56 inches with an overload of information. Welcome to Autos 2.0.

The range of the most efficient EQS 450+ is estimated at about 400 miles. With a Level 2 connector, the EQS and its 9.6-kw charger will likely take more than 11 hours to charge or as little as 31 minutes to reach 80% on 110-kw fast-charging. It can be charged at 200 kw where available. 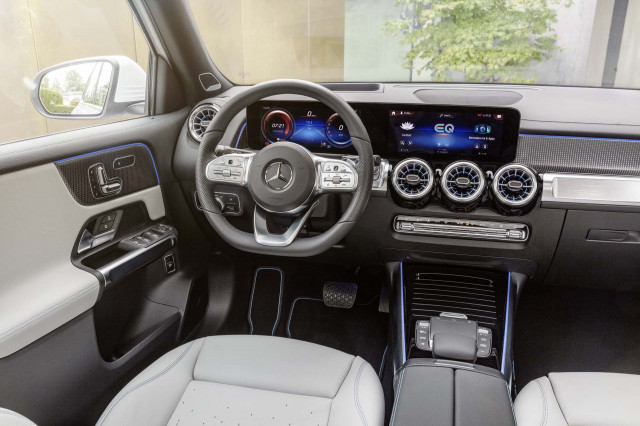 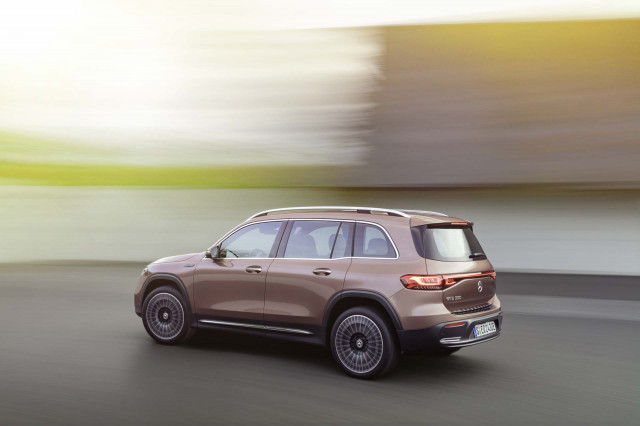 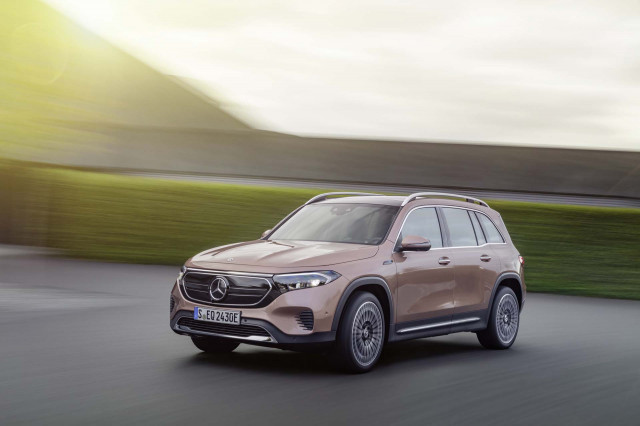 Sized a little smaller than the Tesla Model Y and available with a cramped third row, the EQB parallels the boxy GLB-Class with which it shares a platform. A 66.5-kwh lithium-ion battery pack powers dual motors, one mounted to each axle on the all-wheel-drive EQB 300 and EQB 350. The EQB 300 makes 225 hp and 288 lb-ft of torque, and has an estimated 230-mile range. On a 240-volt Level 2 connection (32 amps), it takes more than 11 hours to charge; a Level 3 fast-charger can charge the battery up to 80% in 31 minutes. The quicker EQB 350 makes 288 hp and 384 lb-ft, and range will take a hit in the name of performance.

The EQB wears a more familiar exterior and interior than other EQ models, hewing more to the GLB gas models. Features include a power liftgate, 64-color ambient lightning, a panoramic sunroof, a head-up display, and options such as heated and cooled front seats that massage, and a sporty AMG Line package. It's expected to go on sale in 2022. 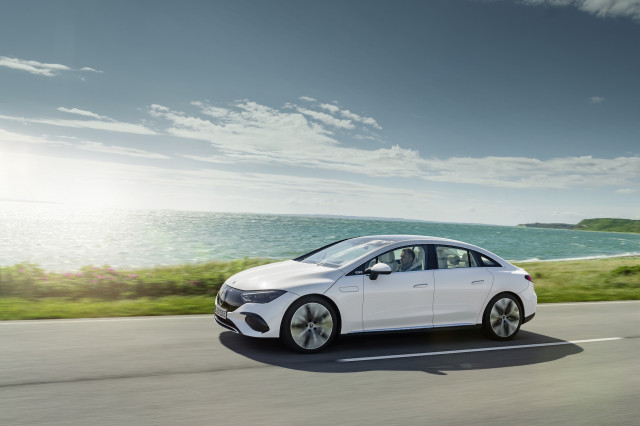 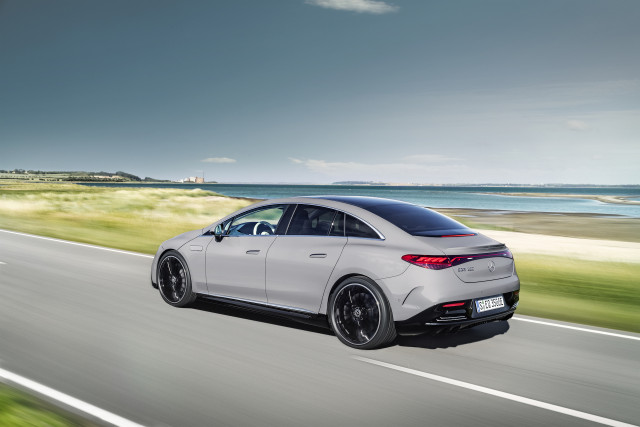 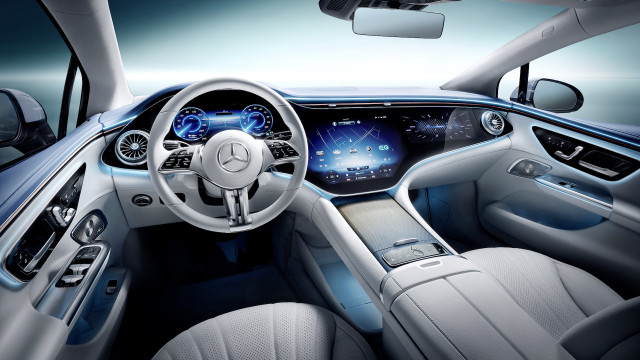 Built on the same platform as the EQS, the smaller EQE shown in Munich uses a 90.6-kwh battery pack to power a single motor on the rear axle. The motor makes 288 hp and 391 lb-ft, which accelerates the sedan from 0-60 mph in 5.6 seconds. A dual-motor version is expected, and an AMG performance model is likely.

Expected to have a range of about 380 miles, the battery charges in 9.5 hours with a 240-volt Level 2 connector, or a Level 3 110-kw DC fast-charger can fill it from 10% to 80% in 31 minutes. The interior comes with the Hyperscreen control interface, which features a 17.7-inch OLED touchscreen flanked by two 12.3-inch digital displays. 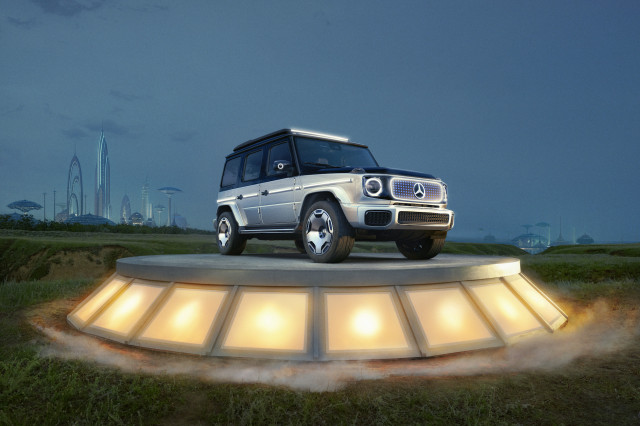 Pricing on these three models will be announced closer to the on-sale dates in 2022. Mercedes also plans an EQA, its smallest electric crossover, and EQC compact crossover in Europe and other markets. Larger SUVs, perhaps like the EQG Concept and Concept Mercedes-Maybach EQS SUV shown in Munich, are expected for the U.S.

Interest in EVs has Tripled â€“ How can Automakers Take Advantage?