Pack it in, pack it out. This camper’s maxim can be embraced by Jeep when it comes to tailpipe emissions in the great outdoors. The 2021 Jeep Wrangler 4xe plug-in hybrid allows for 22 miles of all-electric range and the equivalent of 49 mpg, more than double the next most efficient Wrangler.

The Wrangler “four by e” new for 2021 stands out in the Jeep stable for another reason: It’s the most road-friendly Wrangler to date. My five days in the base Sahara 4xe were limited to how well it behaved on the streets of suburban Chicago.

Bolted into the Wrangler’s existing frame, the 2021 Wrangler 4xe doesn’t sacrifice much in Jeep’s first U.S. application of a plug-in hybrid powertrain.

Sold in Rubicon and High Altitude models as well, the Wrangler 4xe comes in the four-door body style that seats five; the 17.3-kwh battery pack made of 96 lithium ion cells sits below the rear seat. Cargo room behind the rear seat shrinks by four feet, down from 31.7 cubic feet in the standard four-door Wrangler, but most of the other dimensions remain the same. It can even ford up to 30 inches of water, same as a standard issue Wrangler, Jeep says. From the outside, Jeep differentiates the 4xe by painting the two front tow hooks and one rear tow hook blue, and the badging is blue. From Lincoln to Honda, blue appears to be the default color for automotive eco-consciousness.

The other difference is the charge port on the driver’s side fender above a blue Trail Rated badge. I plugged in to a standard 120-volt outlet overnight and had a full battery every morning. On a Level 2 240-volt outlet, the Wrangler 4xe can recharge in about two hours.

The quieter, calmer Wrangler experience begins with remote start. One of two motors whirs to life through the seven-slot grille. The turbo-4 doesn’t kick on, and unlike some other plug-in hybrids, the 4xe has an electric air-conditioning compressor and an electric heater unit so you can run the hvac through the motor at idle.

The smaller motor generator mounted to the engine replaces a traditional starter/alternator duo but also provides instant torque when called upon. A similar setup called eTorque is used in the mild-hybrid variant of the Ram 1500 pickup truck.

When the engine is running but not revving, such as when it’s coasting or braking, the motor converts that energy into electricity to be stored in the battery pack. Press the gas and the motor generates immediate torque to the engine, supplementing the turbo-4 with 44 hp and 39 lb-ft of torque. There’s no lag from a dead stop and ample torque eases passing moves. Jeep quotes a 0-60 mph time of 6.0 seconds, but in electric-only mode the motors lack that quick sprint punch of other electrics. 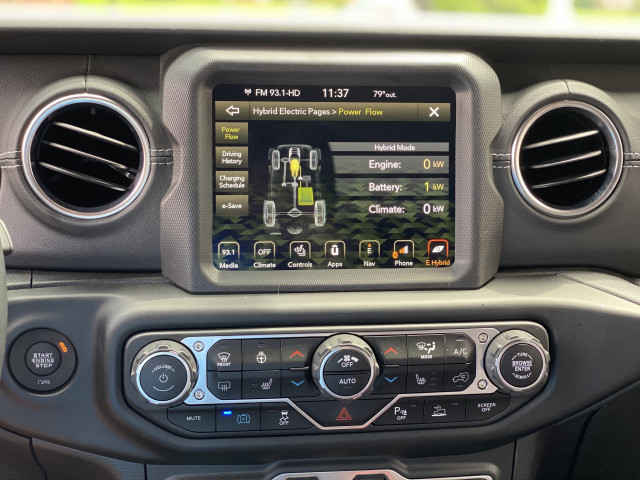 A larger traction motor producing 134 hp and 181 lb-ft replaces a torque converter at the input shaft of the 8-speed automatic transmission. The motors conspire with a 2.0-liter turbo-4 available on other Wranglers to make a whopping 375 hp and 470 lb-ft. The most remarkable thing about all this electro-engineering wizardry is how unobtrusive it is to the driver, while still retaining hallmark capabilities of a Jeep. In some cases, more so.

These two engine choices bookend a spectrum of powertrain options lacking on the 2021 Ford Bronco. Of the two bookends, the 4xe makes more sense.

Since the two-motor system and battery pack fit on the existing Jeep platform, it retains key Wrangler driving characteristics such as standard full-time four-wheel drive, front and rear Dana 44 axles, and a choice of two 2-speed transfer cases. The Sahara tester had the less advanced Selec-Trac system with a 2.72:1 low range gear ratio, but the Rubicon 4xe comes with a 4:1 ratio and front and rear locking differentials.

Jeep says—and many early reviews confirm—that it doesn’t sacrifice the Wrangler’s off-road capability. I can’t confirm. But the 4xe system makes the Wrangler much more livable on the road, where most drivers—even Rubicon drivers—spend most of their time.

The driver can select between three drive modes: The default Hybrid mode balances the power sources based on driver inputs; Electric mode runs on battery power alone until the juice runs out; E-Save mode preserves the battery and uses the engine, which is most efficient on the highway.

Those three buttons are on the dash to the left of the steering column. That’s the only significant difference to the cockpit. But Jeep made a curious move by putting the regenerative brake setting on the climate control panel. The only way you can tell the unfamiliar icon is a PHEV control is because it’s blue. It should be on the drive mode panel. The power transition in Hybrid mode is noticeable only if you’re looking for it, or studying the monitor on the standard 8.4-inch touchscreen. On one 25.5-mile trip it averaged 44.7 mpg, with 15.7 miles covered on electricity alone. The display listed 9 remaining miles of charge. On the return trip, with 10.6 miles covered on electricity and 14.9 miles with the engine, it averaged 26.7 mpg. The big difference on the return trip was higher speed on the interstate when traffic thinned out.

Regen braking gave it a few more miles of electric range than the EPA-rated 22 miles. After a full night of charge and mild temperatures, the gauge listed as many as 27 miles based on previous driving patterns. In Electric mode on an 11-mile trip with 5.5 miles on the highway, and the remaining half on suburban side streets with the a/c at 70, the 4xe used 22.1 miles of electric range round trip but 5 miles of range remained, according to the gauge cluster. It said we averaged 65.8 mpg.

How un-Jeeplike. The lack of engine noise along with muted road noise from Dueler Alenza all-season tires wrapped on 20-inch wheels was pleasantly unsettling. I see a lot of stock Wranglers in the suburbs, and they’re rarely covered in mud. The 4xe makes a lot of sense in these parts. 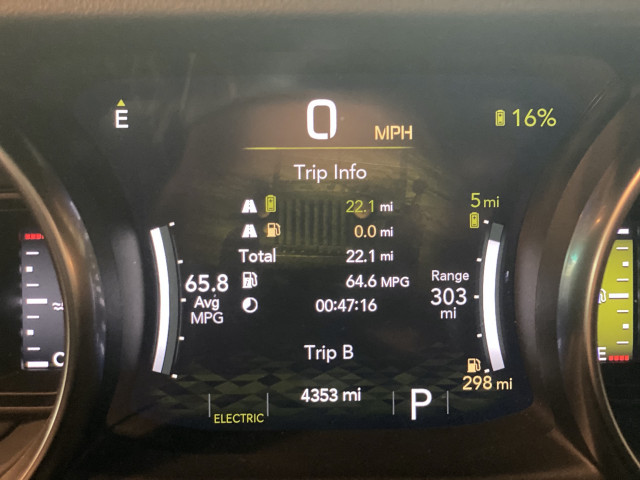 The base 4xe Sahara costs $49,490, including the $1,495 destination, which is $7,000 more than the Wrangler Sahara with the 2.0-liter turbo-4 and 8-speed automatic. But 4xe owners can qualify for the full $7,500 federal EV tax credit, making the 4xe Sahara cheaper on the lot and cheaper to own. In addition to the 20-inch wheels and 8.4-inch touchscreen with Apple CarPlay and Android Auto, it comes well equipped with leather seats, LED headlights, and body-color fender flares. Options such as the three-piece hardtop ($2,495) and Advanced Safety Group with adaptive cruise control ($795) added up to $56,380 total on my tester.

The 4xe is the most practical Wrangler on the road where it’s most often used. That emission-free practicality could extend off-road, too, especially considering that the famed Rubicon trail runs about 22 miles.

Jeep loaned us a 2021 Wrangler 4xe Sahara for this firsthand report.

VW plans to go all-electric in Europe as soon as 2033, US later

The Secret to Asking for Referrals — and Getting Them

Dealerware Selected as Preferred Partner of the Ford and…