The electric vehicle startup Alpha Motor Corporation posted a video this week that showed the “launch” of its Alpha Wolf electric pickup concept.

In it, Joshua Boyt and Jay Lijewski appear together on stage, riffing on ideas the way we’ve seen Silicon Valley types and executives do in a wide range of product debuts. No titles are given, but it’s no stretch to interpret them as designer and CTO recalling how they arrived at the idea behind the vehicle. Underscored with tech-bro sensibilities, they say the electric pickup should be fun to drive and futuristic, while evoking the nostalgia of watching Saturday morning cartoons.

“As we ramp up production lines here in the United States, we anticipate that the Wolf electric truck will be available by the end of 2023,” stated Lijewski. “More information on vehicle test drives and delivery dates will be available closer to production.”

The Wolf is indeed eye candy—a nostalgia trigger, and the sort of EV conversion Burners would sign on to. At about 190 inches long, it’s roughly the length of Ford Rangers, Nissan Hardbodys, and Toyota Trucks of the 1980s and into the ’90s, and it’s irresistibly sweet bait for technology, automotive, and electric vehicle editors who know the audience. Affordability, ruggedness, retro looks, Tesla-style door handles, and the stock-market craze over electric pickups from the Cybertruck to the Rivian R1T. It’s all there. 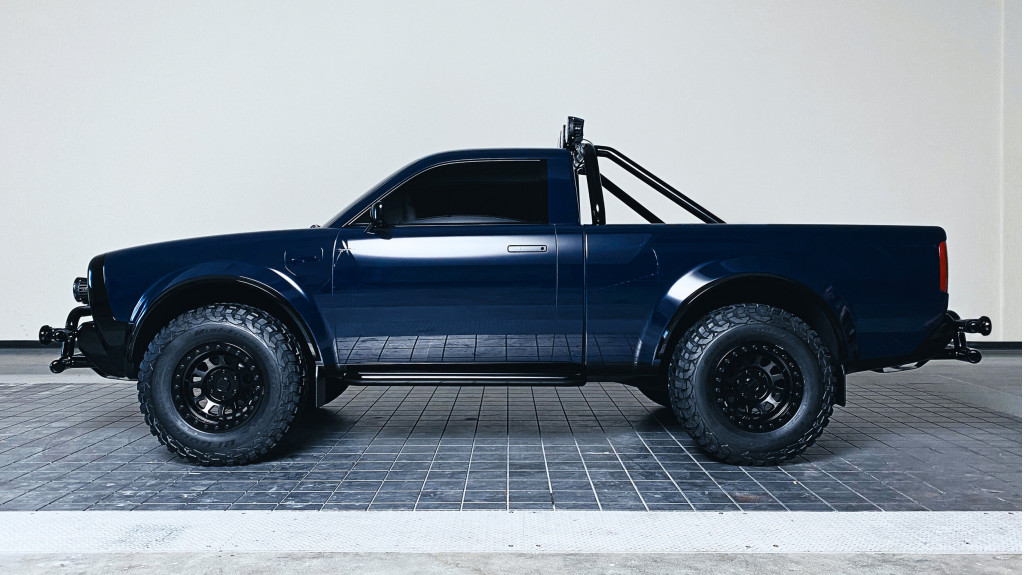 So is a claimed range of 275 miles that beats any other electric vehicle currently on sale in the U.S. today outside of the Ford Mustang Mach-E and Tesla vehicles. Ehem.

A 75-kwh lithium-ion battery pack yields that estimated range, Alpha claims, with a boost back to an 80% charge possible through DC fast charging in about 30 minutes. Additionally, Alpha claims a maximum towing capacity of 3,000 pounds and acceleration to 60 mph in 6.2 seconds.

Not surprisingly, the Wolf has earned all manner of breathless, effusive media coverage—with very little of it critically discussing who Alpha Motor Corporation actually is, why it exists, or how this vehicle might be designed, developed, and built in less time than other startups. Boyt and Lijewski know something about serving the automotive audience what it wants. They worked U.S. events and automotive shows with Volvo prior to this and made small talk with the automotive press—us included. But they were not working on the automotive side of things: They were baristas from Seattle brewing up top-notch coffee and espressos.

Some realities in the filings

The only verifiable fact about the Wolf concept is that it’s on display at the Petersen Automotive Museum in L.A. this week. To the best of our knowledge at the time of writing, Boyt and Lijewski have no significant role in the product itself.

And now the part that the fanboy press probably doesn’t want to hear: Alpha Motor Corporation lists its corporate address as exactly the same, down to the suite, as the U.S. arm of Neuron EV, a here-and-gone company that was reportedly based both in Shanghai and Los Angeles, with a claimed $85 million seed funding round to be used to develop an EV. 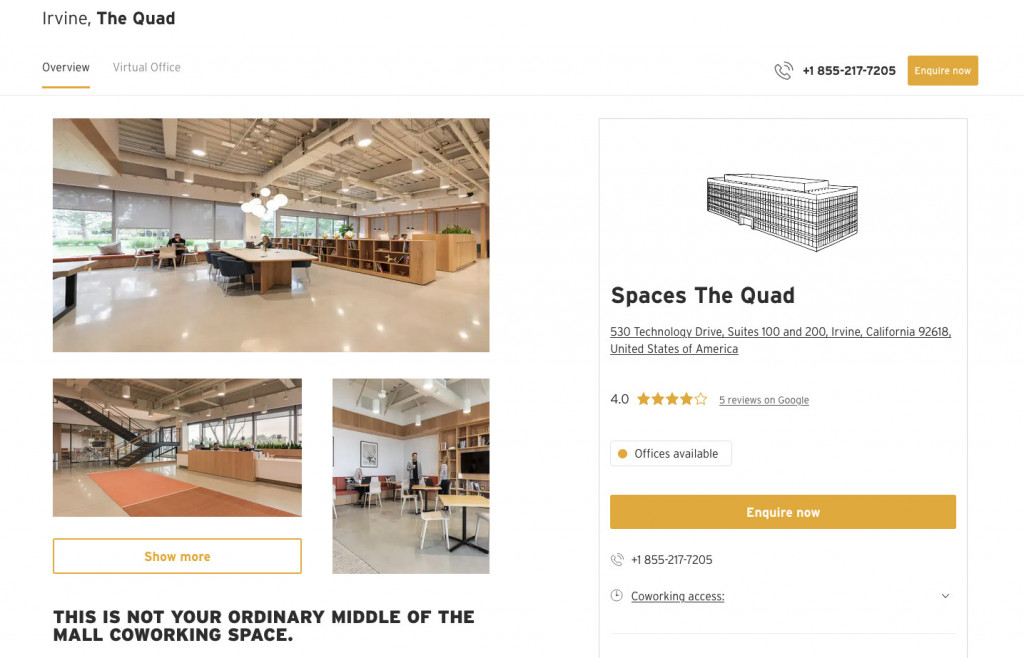 It’s simply not a place where Alpha is doing its top-secret vehicle development work and building its IP—a co-working space adjacent to the Spectrum Mall in Irvine. It’s beyond impossible to see it hosting the workforce, of hundreds if not thousands of employees, that would be necessary to deliver a vehicle in just over two years.

The $85 million Neuron started with, even if Alpha were to have a similar deal, would only be considered training wheels in the world of EV startups. For a U.S.-market vehicle that complies with DOT and safety standards, it costs in the vicinity of $2 billion to cover design, development, and engineering, and get past the validation stage of production. Byton—a recent startup with Chinese connections and funding from an industrial giant, a U.S. presence, a German technology grounding, and a nearly fully baked product—couldn’t quite pull it off with funds well in excess of that amount when you consider its assembly plant cost $1.5 billion alone. Neuron New Energy Vehicle was founded by Gang Zheng, a venture capital investor in China, and Neuron Corporation, known as Neuron EV, was originally registered as a California company in 2018, initially registered to Jonathan Leu but signed by Edward Lee, with Lee and Michelle Quan as executives.

One startup went dark, the other sparked in its place

Neuron’s website followed a similar design and layout to Alpha’s, and it originally put out sustainability-rich language that is close to Alpha’s messaging—although Neuron’s model itself, with a full line of modular trucks, including a Class 8 semi, was far more vast and ambitious. Then at some point later in 2019 it went silent. Green Car Reports tried to get in touch with Neuron EV around that time to check the status of its projects and received no reply; sometime soon after, its website was taken offline.

In April 2020, a new document was filed, transferring Neuron’s executive positions to Gang Zheng. In June, paperwork was posted for the dissolution of the company.

Then two more things happened. Neuron EV was registered separately as a new California company in August 2020, setting up shop in an office building in adjacent Tustin, near John Wayne Airport—with Gang Zheng as a director. Alpha Motor Corporation was incorporated in Delaware that same month, with Neuron’s Michelle Quan and Edward Lee l isted as executives, then registered at the same Irvine address in September 2020. Under the new incarnation, Michael Adam Smith—a financial advisor—plugged in as the executive officer. And in a Statement of Information to California in January 2021, the company lists a different Lee, Kevin Lee (signed), as its CEO with Michelle Quan the secretary, CFO, and agent.

There are more than a few things that don’t entirely pass the sniff test. A release accompanying the video used peculiar language for an EV startup, noting that the Wolf is “a versatile pickup truck motorized by an all-battery electric power system.” It said the company “is set to accelerate vehicle development by automating the latest digital efficiencies,” and mentioned a “precision virtual validation” enabled by the AMD Threadripper Pro.

No, that’s not a manufacturing system or a solution involving robotics; the Threadripper Pro is a high-end processor for gaming and design workstations, worth potentially less than the design software—like Catia—that would be needed to design a complete electric vehicle.

Neuron and Alpha not related at all. Hah.

Despite all the similarities—remember, the same office location and all—Alpha Motor Corporation asserted to Green Car Reports in an email response that it is unrelated to Neuron EV, and that the Wolf is not based on an existing production vehicle, current or past. It also stated that it is not funded by Gang Zheng.

The most disjointed part of the video launch of the Alpha Wolf concept is the coffee guys, Boyt and Lijewski. They spoke with a “we” consistently enough to indicate that they’re a part of the automaker.

Calls left to Boyt’s consultancy, which appears to primarily serve coffee customers, went unanswered. Then the company replied to Green Car Reports late Wednesday with the following piece of insight, via email: “Joshua Boyt and Jay Lijewski are representatives of Alpha Motor Corporation’s “Move Humanity” movement. “Move Humanity” is an initiative to build a community that supports positive change and support other relevant causes through innovation.”

“The company first connected with Jay and Josh through an event to raise awareness for the humanitarian crisis in Yemen,” Alpha added.

From Yemeni coffee to short circuits

Both Alpha and the new iteration of Neuron are listed by the California Employment Development Department as having an unknown number of employees.

Since February we’ve asked Alpha four times for more information about the company and its executive officers. We know at least one of these messages was received, as we were added to a mailing list.

It’s not unusual for electric vehicle startups to enter a so-called “stealth mode,” in which the company maintains a very low profile while it works through initial funding, on the way to present a first concept and business plan. What makes this different is that the company has already presented seven vehicles in detailed rendering and one is a physical concept, on display at a renowned auto museum.

Yes, it’s great that a startup is making giving back a part of the culture. But where are the company resources and employees? In China? Who are these U.S. executives? Do they have more funding than Neuron? Or are they relying on crowdfunding a nostalgic-looking design, only to discover how difficult it really is to deliver a vehicle? The Petersen Museum confirmed to us that the concept has arrived and will be on Level 2 of the building until November. The museum, which instantly adds legitimacy to Alpha by displaying the concept, hasn’t yet replied about whether Alpha Motor was vetted as part of its acceptance. Further questions from us to the company relayed through Petersen’s PR agency—about a release Alpha put out—have not yet received a reply. This is an unusual way to introduce a company.

We don’t know anything about Quan or Lee and their capability to design or build vehicles, but given the trajectory of past EV startups, time and reputation are ticking away.

Based on what’s material and verified firsthand, the most we know about anyone we’ve met who’s associated with Alpha Motors so far is this: They make a damn fine cup of coffee.