California is the trend-setter for green vehicles in the U.S. in many respects. It’s also far and wide the nation’s largest market for electric vehicles—and for plug-in hybrids.

Despite the state’s efforts, PHEVs haven’t been gaining market ground in recent years. According to the quarterly report from the California New Car Dealers Association released last week, PHEVs fell from 3.0% of the state’s new vehicle market to just 1.9% in 2020. 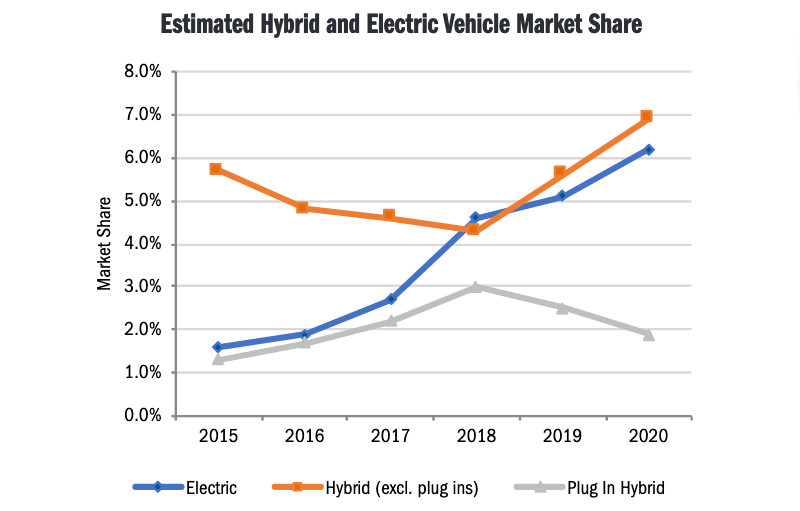 The sharp change in trajectory of PHEVs started in 2018 and continued throughout 2019. It’s likely no coincidence that 2018 was the first year the Tesla Model 3 was widely available, and 2019 brought first deliveries of the Hyundai Kona Electric and Kia Soul EV.

It makes sense. Those who have access to home charging have discovered that newer long-range EVs plus the occasional use of growing DC fast-charging networks will cover their road-trip needs.

In December 2019, California dropped the Clean Vehicle Rebate amount for plug-in hybrids from $1.500 to $1,000 and started exclusive vehicles costing more than $60,000. There were already household income thresholds for allowing the incentive in place since 2015, but that arguably chipped away at many of the German luxury brands’ PHEVs while encouraging vehicles like the Tesla Model 3 and Model Y.

California added a new $1,500 point-of-sale rebate on EVs and plug-in hybrids, offered in partnership with state utilities, that went into effect in November.

As summed by the California trade group Veloz, about 45% of cumulative national zero-emission vehicle (EVs, PHEVs, and fuel-cell vehicles) have been sold in California.

The state last year registered the lowest annual new-vehicle sales in the state since 2011, but it was nowhere near as low as the economic bottom of 2009 and 2010. The Toyota RAV4 was less than 2,000 sales away from overtaking the Honda Civic as the longline best-selling nameplate in the state. No doubt aided by the 40-mpg RAV4 Hybrid and to some degree by the RAV4 Prime plug-in hybrid, the RAV4 adds up to nearly one out of every four compact SUVs sold in the state.

Toyota and Honda—both brands with very limited plug-in offerings and no EVs whatsoever available in California—collectively accounted for nearly 29% of new-vehicle sales in the state in 2020. Volvo, Tesla, GMC, and Chrysler gained the most on a brand basis in the state.

The Fast and The Furious Rides Again

NASCAR Ready For Circuit of The Americas Races in May

Tesla capitulates in recall of Model X, Model S for…