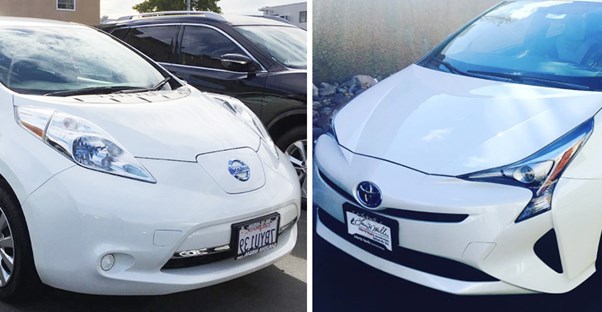 This year, environmentally-friendly cars made an appearance at nearly every auto show out there from Paris to Los Angeles. While you won’t be able to get the now-legendary Tesla Model 3, you can still get the new 2022 Nissan Leaf or 2022 Toyota Prius four-door. These two eco-friendly cars are the best in the market, but how can you choose? With this breakdown of course!

Comparing an electric car to a hybrid may seem unfair, but it may not be so uneven when you get down to the nitty-gritty. It comes down to what your priorities are and what kind of experience you want. The Nissan Leaf has a full charge range of 226 miles. That’s for a full battery charge, and you may experience less range when you have a lower charge.

The Prius gets approximately 58 mpg in the city and 53 mpg on the highway. While you need to charge your Nissan at an appropriate charging station, a Prius charges the battery by using regenerative braking or the gas engine when underway.  You fill the tank with gas, and once the better is depleted, the Prius engine recharges the battery as well as power the car conventionally. The new Prius has an 11.4-gallon tank, which means you can go around 632 miles per tank. Of course, this highly depends on your driving habits. In the city, it’s possible to get up to 655 miles.

In the end, you can drive further without having to stop in the Prius than you can in the Nissan Leaf. Depending on where you live, you may also have a hard time finding stations to recharge your Leaf while you’re out-and-about.

Unlike fuel economy, the prices of the Prius and the Leaf are a little easier to examine. The 2022 Toyota Prius is the cheaper option with a starting MSRP of $24,525. Comparatively, the Nissan Leaf has a starting price of $27,400. The price difference is just under $3,000, which may not be that much more than the Toyota over time.

No one wants to purchase a vehicle that can break down in the future. The reliability of the 2022 Nissan Leaf hasn’t been recorded, but the 2021 version had an average reliability score. No recalls were issued for that model year.

The 2022 Toyota Prius has an average reliability score and sadly, there has already been a serious recall. The Prius also has had a recall from the National Highway Traffic Safety Administration for its faulty electronic control unit software. The software would falsely detect an error and shut down power to the vehicle which could cause a crash.

It’s easy to see how the two vehicles stack up side by side. In the end, which car you choose depends on your driving style. Those who need to drive long distances should consider sticking with the Prius because you’ll have to stop less. Additionally, you don’t need to find special charging stations. However, if you live in a place with several charging stations and you don’t mind stopping or driving short distances, the Nissan Leaf may be the electric vehicle for you.