A new Lightning is coming, and with it Ford shocks the pickup truck segment it has dominated for more than four decades. On Wednesday, the truckmaker debuted the 2022 Ford F-150 Lightning electric pickup truck with a 10,000-pound towing capacity, an estimated 300-mile range, and an estimated 0-60 mph time of about 4.4 seconds.

The truck, and its undisclosed large battery capacity, can double as a backup house generator for up to three days. If doomsday scenarios aren’t your thing, it has a front trunk that can double as a cooler for the ultimate tailgate or hunting expedition.

It looks like an F-150, acts like an F-150, and smacks like an F-150 with a starting price of about $53,000 for an XLT trim crew cab with a 5-foot-5 bed and four-wheel drive. It’s the only configuration offered on the Lightning, but can be had in four trim levels, including base, Lariat, and Platinum. Base commercial models, which may have gotten a big boost from President Joe Biden’s F-150 Lightning testing yesterday, start below $40,000, before state or federal tax credits.

“We’re not here to make an electric truck for the few—Ford is committed to building one that solves real problems for real people,” Kumar Galhotra, Ford president for Americas, said in a statement.

It won’t be the only electric truck on the market when it arrives in early 2022. The Rivian R1T mid-size pickup is expected this summer, and will be followed by the GMC Hummer EV late this year, as well as the chimera known as the Tesla Cybertruck. But the 2022 Ford F-150 Lightning is the only one that looks like a traditional full-size pickup truck. The differences between it and Ford’s bread and butter are minor. The frunk that lifts up from bumper level contributes to it being an inch longer, and the massive battery packs suspended between the axles in the floor account for 8.9 inches of ground clearance that’s half an inch less than the 2021 F-150 crew cab and a cab that’s 1.7 inches taller. More aerodynamic runnings boards and different wheel designs mark a difference from the redesigned 2021 F-150 that included a hybrid model.

Up front, beyond the charge port above the driver’s side front fender, the Lightning earns its badge of distinction. The classic C-clamp headlights bridge a single LED lightbar across the front of higher trims, and the grille becomes a solid air deflector. A single light bar spans the tailgate as well, but don’t look for any tailpipes below.

Skid plates protect the dual in-board motors powered by a standard-range battery pack good for 230 miles or an extended-range pack with an estimated 300 miles. Ford did not disclose the size of the packs. Either pack can charge the motors to make up to 775 lb-ft of torque, while the standard range generates 426 hp and the larger pack makes 563 hp. Lightnings with the extended range can flash to 60 mph in the mid-four-second range, but we thought we heard a Ford rep tell President Biden 4.4 seconds in a viral tweet. 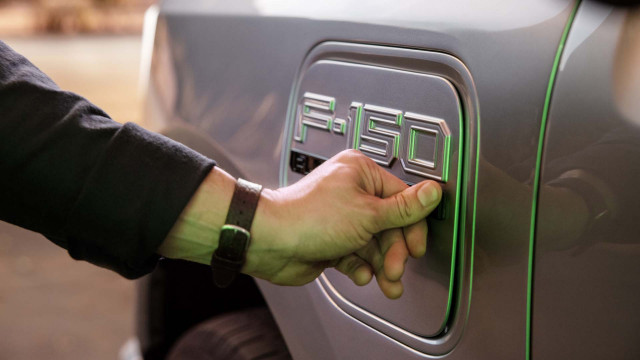 Charging time will take considerably longer. On a 150-kw Level 3 DC fast charger, the Lightning can recharge from 15% to 80% in 41 minutes, or about 54 miles per minute. At home, owners will need to install at least a 32-amp, 240-watt Level 2 charger. An available 80-amp Ford Charge Station Pro can charge the truck in about 10 hours. If you were to opt for this extra install, the truck, once charged, could power your house in case of emergency for up to three days, or as long as 10 days with rationing, Ford said.

A lot of that juice could be harnessed outside of the home, as well. Same as the 2021 Ford F-150 Hybrid, a 2.4-kw outlet can charge power tools and other electronics, or Lariat and Platinum trims come with a 7.2-kw outlet in the short bed and a 2.4-kw outlet in the upper rim of the frunk. That water-resistant frunk with the drainable floor can carry 14.1 cubic feet of stuff, or 400 pounds of payload, and Ford says it’s big enough to fit two sets of golf clubs. It also has two USB chargers, and four electrical outlets.

Onboard power continues inside, with the digitization of interfaces such as a 15.5-inch touchscreen with smartphone compatibility and natural voice controls. A 12.0-inch digital instrument cluster can show everything from regenerative braking to the status of driver assist systems, including BlueCruise limited hands-free driving system. Then there are all the traditional F-150 characteristics. Ford targets a payload of 2,000 pounds with the lighter weight standard-range model with 18-inch wheels, and a max towing capacity of 10,000 pounds on XLT and Lariat trim with the extended range and Max Trailer Tow package. The aluminum alloy body rides on a rear independent suspension, and four drive modes—Normal, Sport, Off Road, and Tow/Haul—help modulate the conditions.

For now, the only condition is reservation mode; early EV truck adopters can plunk down a $100 deposit for delivery in spring 2022.

The 2022 Ford F-150 Lightning is built in the Rouge Electric Vehicle Center outside of Detroit.

How to Win Back and Retain Service Customers