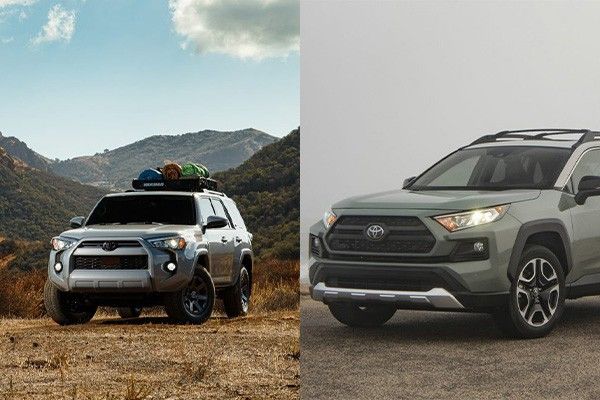 Comparing the 4Runner and Rav4

If you are flexible on the size, both the 2021 Toyota 4Runner and the RAV4 have a lot to offer in terms of performance on the road and off-road. Plus, they come packed with convenience and comfort features that Toyota users have come to expect. Read on to learn more!

The cost of a vehicle is usually one of the top concerns for families.  But no matter your budget, Toyota usually has something to offer in your price range. The 2021 Toyota 4Runner and the 2021 Toyota RAV4 offer a clear difference in price but it’s what you are getting for your money that counts.

The 2021 Toyota 4Runner features a 4.0-liter V6 engine that generates an impressive 270 horsepower and 278 lb-ft of torque. The RAV4, on the other hand, features a 2.5-liter four-cylinder engine that generates just 203 horsepower and 184 lb-ft of torque. The drivetrain options for the vehicles include the standard rear-wheel drive and four-wheel drive on the 4Runner, or rear-wheel-drive and all-wheel-drive with the Rav4. A five-speed automatic transmission is standard in the 4Runner and an eight-speed is standard in the RAV4.

The 4Runner is generally well-suited for off-road driving, but it can handle city driving well enough. Most of the available Rav4 trims are up to the task in terms of off-road driving, except for the TRD Pro trim. With that said, if you are choosing a model solely on performance, your safest bet would be the highest-end Rav4 trim that will give you the best of both worlds – on- and off-road.

Features are an important part of every Toyota model, as the automaker usually doesn’t hold back in this regard. The Toyota RAV4 comes equipped with a 7-inch touch screen, while the 4Runner features a slightly larger 8-inch touch screen. They both feature Android Auto, Apple CarPlay and Amazon Alexa smartphone integration, as well as features like satellite radio and Bluetooth.

The 4Runner does offer more USB ports (four to be exact), an eight-speaker audio system versus the six-speaker system in the RAV4, and a 120-volt outlet not featured in the RAV4. Many of these features can be upgraded in either model including the vehicles’ displays and audio systems.

Both the 4Runner and RAV4 offer decent performance on the road and off. However, you’ll find that the RAV4 is a much more practical option due to its fuel economy. But if you need seating for up to seven passengers, the 4Runner is going to be the more practical option for your family. Either way, you’ll be graced with great features and a comfortable interior, particularly if you are willing to put a little more money down for your vehicle.

Where Your Author Ultimately Decides to Give Up Golf (Part…