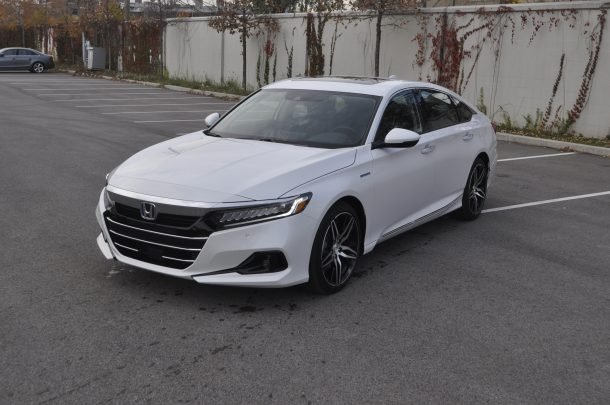 When Honda sent out the press release detailing the updates for the 2021 model-year Accord and Accord Hybrid, I shed a tear (figuratively) for the loss of the manual-transmission option in the gas models, and wondered why they were bothering with the hybrid. There didn’t seem to be much changed.

That may be true, but perhaps it’s because there wasn’t much to fix to begin with?

I’m not saying the Accord, which is among the tops of the mid-size class, is without flaws. This particular model gets thrashy when you dig into the throttle, the seats are a bit stiff for long drives, and the steering is a bit too artificial-feeling.

But like its main rival, Toyota’s Camry, the Accord gets a lot of love for being balanced. The Accord has always offered up driving fun for those who care without forcing those who don’t to sacrifice ride quality or comfort or fuel economy, and while the Camry was once dogged for being capable but boring, it, too, has become as well balanced as the Honda.

Both cars just work, which helps explain their popularity among the plebes as well as among cynical auto journos. Both feel well screwed together, as well.

And this particular Accord will challenge your bladder on road trips. 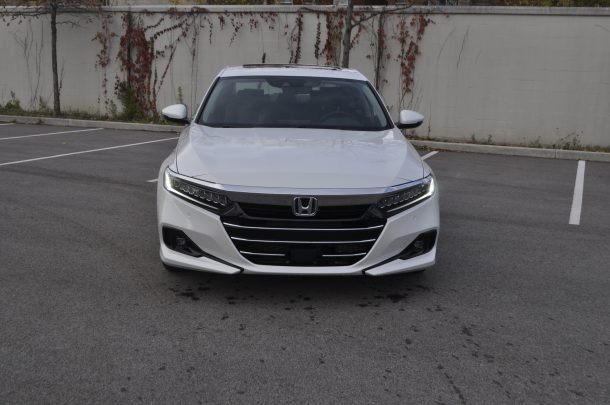 (Full disclosure: Honda invited me to drive to the Ann Arbor/Plymouth area of southeast Michigan, paid for my hotel and meals, and offered a gift card for trip expenses that I politely declined. I drove a Honda CR-V Hybrid up to return to Honda from the local press fleet and drove an Accord Hybrid back – what’s known in the business as a “drive-away”, naturally. Myself, other attending media, and Honda personnel all abided by COVID19 precautions, including masks. The Accord Hybrid I drove home was the same one I tested on the local one-hour-long drive loop, as well as around town in my home city, and it is the subject vehicle for this review. The CR-V will be reviewed at a future date.)

I’ll admit I screwed up and forgot to reset the trip odo before hitting the local streets around Northville, Michigan, so my numbers will be a bit off, but I did reset the trip meter before booking it home to Chicago and according to the computer, I was getting into the high 30s when it comes to mpg. More on that down below. The fuel tank wasn’t full when I left – I don’t think it was full even when I started the drive loop – and yet, I had not even the slight bit of worry that the 260-ish mile drive would require a fuel stop.

Not for the car, anyway. I do require food and caffeine – aka human fuel. And my bladder has needs, too. 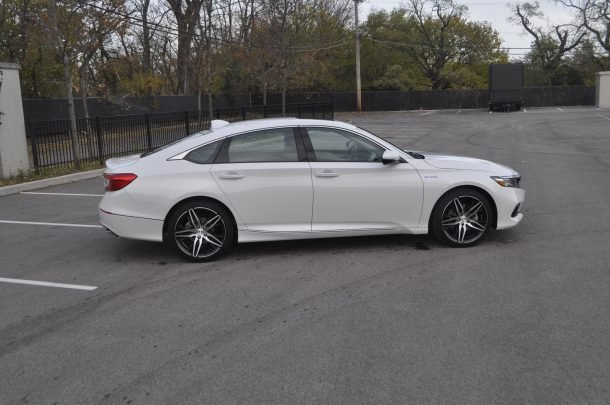 Before you dive into the comments to shout at me that most modern cars can make 260 miles without refueling, even if they aren’t electrified in any way, that’s true. But there’s more peace of mind at hand when you glance at the dash and see a large gap in range remaining compared to the miles to home. And more fuel to play around with before stopping to fill up when you finally reach the “around town” part of the trip.

I’ve driven to Detroit or its metro area at least once a year since the late Aughts, on average anyway, and while most vehicles I’ve piloted got me from my home to hotel, or hotel to home, without a stop, there’s more to maximizing fuel economy and range than just one trip. Sure, most vehicles, including some crossovers, could get you from here to there without sweat. In some cases, it’s due to high highway mpg and in others, a large tank gives you long-range (think of trucks that get horrible mpg numbers but have impressive ranges due to mega-size tanks). Sometimes it’s both. 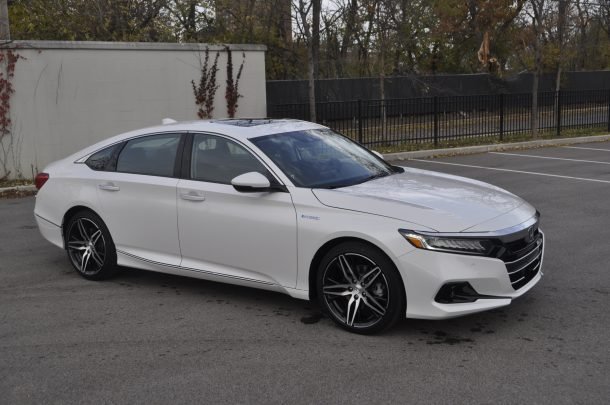 Thing is, it’s all about the overall experience, not just road trips. That’s why one buys a hybrid – to maximize their fuel range in all kinds of driving. And the Accord accomplishes that, too. A quick look at the power flow meter shows that in stop-and-go driving, judicious use of the throttle can keep the gas engine from firing, instead using the electric propulsion motor to keep things in EV operation. And there’s an EV drive mode you can select, too, that can keep the car running purely on electric in certain situations.

The transition between gas and hybrid is smooth, too, hardly felt or heard from the driver’s seat. Unfortunately, matting the throttle to pass leads to a level of thrash from underneath that’s a bit unbecoming of a car that otherwise acquits itself well when it comes to NVH.

The two-mode hybrid system puts out a peak 212 horsepower and 232 lb-ft of torque, same as last year, but the changes Honda made to the system are meant to make the power available closer to idle, with a more responsive overall throttle. My basis for comparison is limited – I last drove the hybrid at the launch of the current generation, and I don’t recall how responsive the throttle was or wasn’t three-plus years ago. It does feel properly reactive here, though. 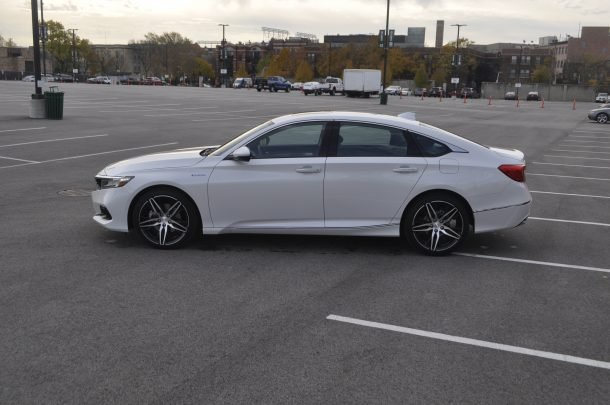 That doesn’t make the car extra swift, per se. It does weigh over 3,400 pounds (3,415 to be precise). It moves its mass well enough to pass with ease, and you won’t often feel left wanting, but don’t expect to warp time and space. You have the power you’ll need, and that’s likely enough.

The two electric motors are a propulsion motor and a starter/generator. The gas engine that’s part of the hybrid setup is a 2.0-liter four-cylinder.

Here’s how it works – in EV mode, the gas engine takes a rest, and the propulsion motor feeds power to the wheels using juice from the battery. In hybrid operation, the engine powers the generator which then sends electricity to the propulsion motor, as well as to the battery to charge it. The gas engine can also connect directly to the wheels via a clutch, which it does during high-speed cruising. Braking and deceleration create regenerative energy. 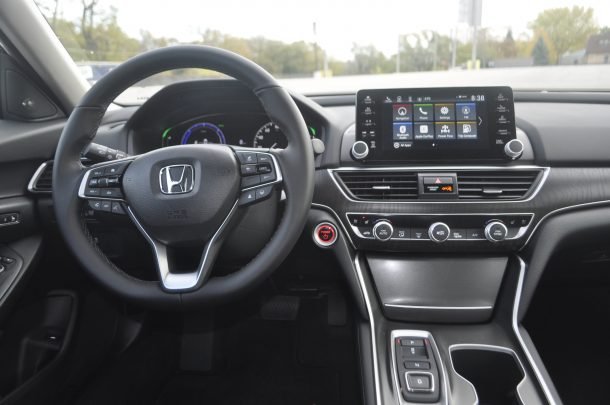 The EPA numbers are 48 mpg city/highway/combined for all Accord Hybrid models save the Touring, which comes in at 41/44/43. I achieved just over 37 mpg, according to the computer, driving from outside Detroit to Chicago, with that number dropping by about half an mpg when I returned home and started running errands.

That’s below the EPA number, obviously, but it should be noted that I have a heavy foot, I don’t use cruise control, and while that drive was mostly highway it also included some suburban and urban driving. Furthermore, EPA test cycles tend to be optimistic compared to real-world conditions. That number may be shy of the sticker, but it’s still pretty dang good.

Handling-wise, the steering feels a tad less light than I recall from that first spin, but it still feels distant, as too many cars do these days. Though not so artificial that you can’t place the wheels just right or make a mid-corner correction easily. It’s a pretty good setup, especially for a family car – just not quite natural-feeling enough for my tastes. Sport mode does make the steering feel tighter. Conversely, Econ mode apparently dulls the throttle response – select this mode only on the highway, and only once up to speed and not needing to pass often. 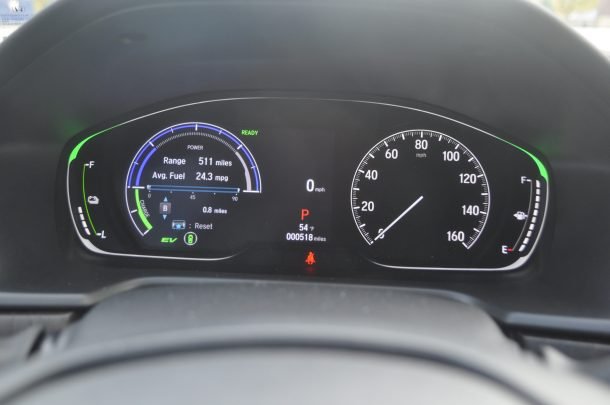 The ride is mostly pleasant – there’s a bit of lean to the stiff side, but that really only reveals itself on the worst pavement. Interstate 94 cutting across Michigan was tackled with ease and almost no float, wallow, or any other nastiness of that sort. The Accord Hybrid is a comfortable interstate cruiser that doesn’t give up much handling ability. Body roll is mostly controlled. The Sport mode that tightens up the steering doesn’t seem to stiffen the ride too much.

Ah, comfort. The same can’t be said of the seats. They’re fine for most driving – but hard enough that after an hour or two, my back started to complain. To be clear, I am not someone with the kind of balky back that acts up easily, so I take notice when seats cause me to grumble. At least the amount of time that passed before I perceived discomfort was over an hour – meaning commuting or errand running shouldn’t be an issue.

The rest of the interior is upscale feeling, with nice materials. The return of radio knobs is appreciated, and the infotainment screen’s tiled layout is easy to work with. The big news here is the addition of wireless CarPlay and Android Auto. The button shifter is still weird, but you get used to it. I still don’t like infotainment screens that “sail” above the dash, but that’s personal preference more than anything, and it’s easy to reach at least. My phone and the wireless cell-phone charger did sometimes fail to connect, and I also lost connection at times as the phone shifted around while I drove. Best to have a wired USB connection for backup if you like to charge while you drive. 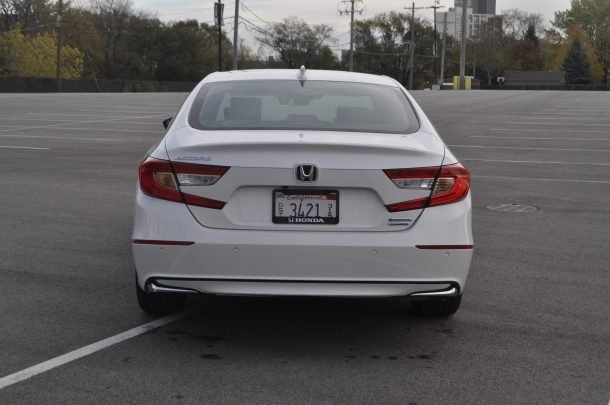 I also had some issues with CarPlay playing particular songs. Siri claimed not to find songs that were in my library because they weren’t on Apple Music, which I haven’t signed up for. Yet, the songs are there, on my phone. Some investigation with Honda showed this is apparently an issue with Apple pulling from Apple Music instead of a user’s library.

As a workaround, a driver can use their phone manually to call up the desired tune, though that sort of defeats the purpose of using voice recognition to keep your eyes on the road. The car I’m testing this week has the same issue and it’s not a Honda or Acura product, so this appears to be something Apple may need to address with the next software update.

Those of you who have been reading this site since the latest Accord has been on the roads panned its looks, mostly the grille. For ’21, all Accords have a wider grille with what Honda says, correctly in this scribe’s opinion, is better integration of the necessary electronics for Honda Sensing driver’s aids. The fog-lamp openings shrink. Hybrids get special badging and gain 19-inch wheels on Touring-trim models, like the one I tested. 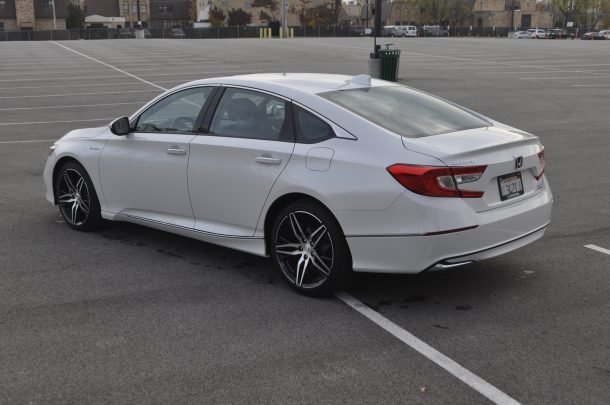 A Touring model like the one I drove adds 19-inch wheels, low-speed braking control, navigation, adaptive dampers, a head-up display, HondaLink, heated and cooled front seats, heated rear seats, rain-sensing wipers, ambient lighting for the doors, sideview mirrors that tilt when the car is in reverse, and parking sensors. 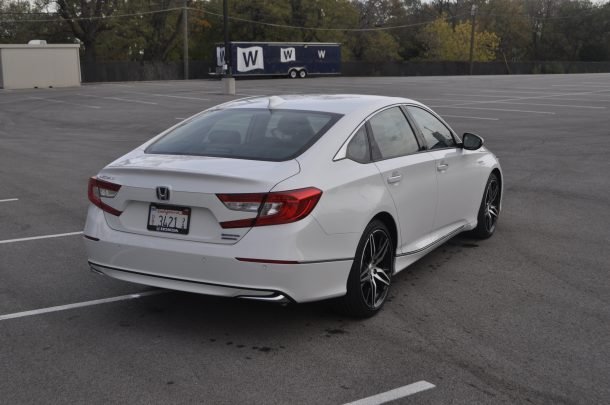 The flaws I picked up on are mostly small potatoes, and the overall experience isn’t ruined. It’s more positive than negative, and I can see why the Accord remains so popular. Honda hasn’t always gotten the Accord right – it’s been, at times, criticized for being too comfortable to the point of flirtation with the dreaded s-word (“soft”) – but the current-gen car is well-balanced, and the tradeoffs often made with hybrid models to maximize fuel economy don’t change that.

Honda PR told us the hybrid Accord is the one to get – it’s even in the press release – but I don’t know about that. I’d need to drive the gassers again to compare. That said, if it’s the Accord you do get – and many people have a good use case for hybridization – you’ll be buying a comfortable-riding four-door that sips fuel and is engaging enough, if not a pure sports sedan.

Well-rounded machinery almost always gets high marks from me, and despite some flaws that stick out, this Accord grades well.

RouteOne Continues to Digitize the F&I Process with the…

Parts and Services Bounce Back