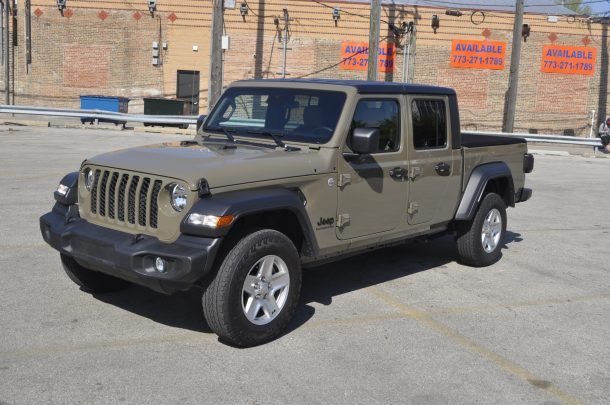 Jeep loves to talk about its off-road heritage. And it has the goods to back the claims of boulder-bashing prowess that it makes.

That said, most utility vehicles spend most of their time on pavement. And sometimes, the tradeoffs made for off-road capability aren’t worth it.

Enter the Jeep Gladiator Sport. Jeep will never say this trim level of the truck is meant for city dwellers, but it worked well in my urban neighborhood. If you need to jump dunes and crawl through the jungle, you can drop a lot of coin on the Rubicon or Mojave. If you just think the Gladiator looks cool, and need a small truck to occasionally haul stuff, and you never plan to set foot on the ACTUAL Rubicon, the Sport might just suit your needs.

You might even save a bit of dough if you’re judicious with the option boxes. And even in a more basic form, the Gladiator can still handle some tough truckin’ off-road. 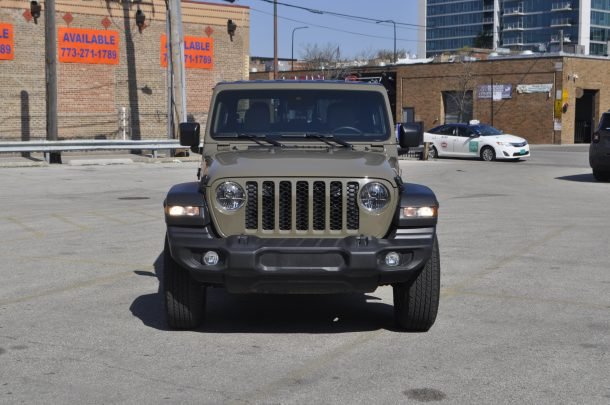 Overall, the Gladiator Sport experience is the same I’ve become familiar with by now – this truck was the third Gladiator I’ve been loaned, and I attended the launch – but with some improvements. The big change was the steering tweaks I mentioned in my Mojave review. Jeep engineers heard the whine in reviews like this one and fixed the steering to reduce play and wander.

It’s still truckish, and still needs more attention that is normal in the year 2020, but it’s far less obnoxious than before. The improvement is noticeable and makes driving around the city far more pleasant.

Otherwise, the Gladiator still feels slow to get rolling, still rides stiffly, and still feels like a Wrangler with a bed, for better or for worse. It’s louder and harsher than the competition, too.

All these things are to be somewhat expected, though, and depending on one’s perspective, they aren’t flaws so much as willing tradeoffs you make. Features, not bugs, so to speak. 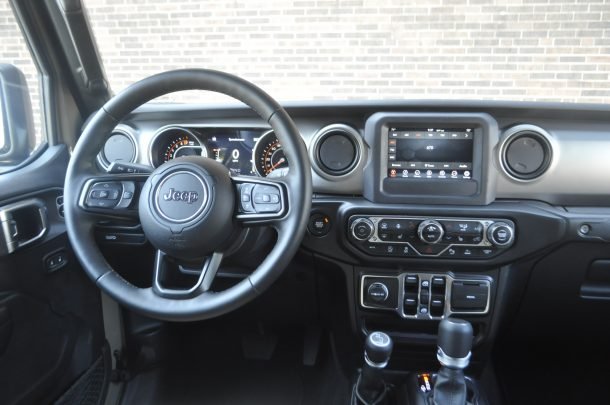 The Gladiator is a bit like certain sports cars in that regard. Some sports cars can be daily driven quite easily without much sacrifice. Others penalize you at the pump, or have no real rear seat, or no cargo space, or ride so stiffly your chiropractor is on speed dial. Some exhibit all of those flaws. But you buy them because they look cool and are fun to drive.

This Jeep has the former down pat – even when the Gladiator annoys, you glance back at it when you’re walking away, and think “damn that truck looks cool.” Then you remember that driving it is only fun on the fire roads. 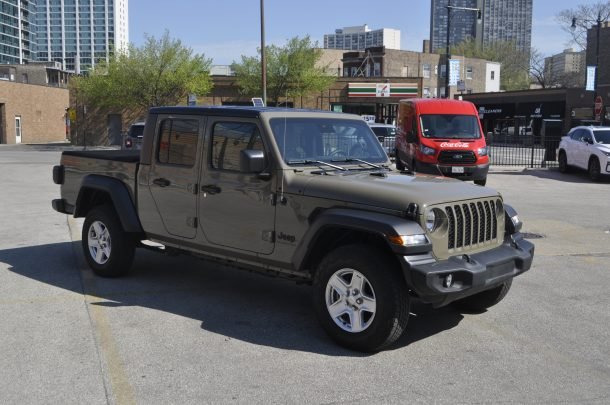 It would certainly help if Jeep could coax more power out of the venerable Pentastar 3.6-liter V6. On paper, 285 horsepower and 260 lb-ft of torque don’t sound bad, but the engine is still being asked to motivate over 4,500 pounds. Not to mention that peak torque doesn’t come on boil until 4,400 rpm. To get full twist, you’ll need to be digging into the throttle often, thus sucking down unleaded at a faster rate. Not that you’re not already going to be familiar with the local gas-station cashiers – the fuel economy is rated at 17 mpg city/19 mpg highway/22 mpg combined.

Stiff, truckish ride; heavy, distant steering that requires constant correction; harsh engine noise signaling fury but not much urgency in acceleration; yup, that’s the Wrangler experience. And as I’ve written before about this truck, that’s the plan.

As a reviewer, it’s a weird headspace to be in – dinging a vehicle for subpar on-road driving dynamics while understanding that a) it’s a tradeoff to allow the truck to shine off-road and b) those subpar dynamics are, if not actively desired by buyers, they are least accepted with little or no complaint.

Use cases are a thing, after all.

User-friendliness and intended use aside, the Gladiator still turns my head. I still notice them in traffic. It is arguably the coolest looking mid-size truck on the market. And the inside is no letdown. Jeep set about fixing terrible Wrangler interiors when it brought the latest-gen Wrangler to market, and that carries over to the Gladiator – the cockpit looks nice, and like most current FCA interiors, the use of large knobs, large fonts, and UConnect infotainment makes most switchgear easy to use and read at a glance. 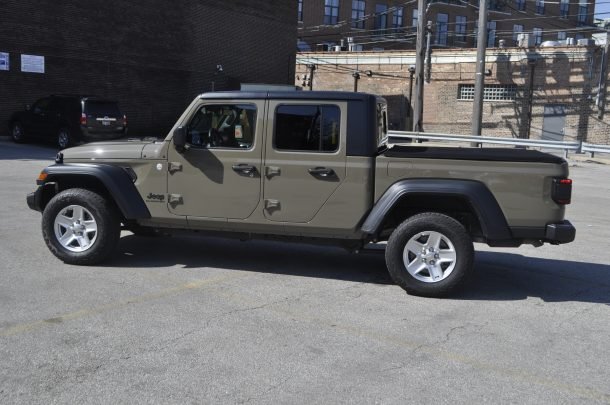 I mentioned earlier that the Sport trim could be a Gladiator value. It can, but one must be judicious with options. Perhaps too judicious – start adding popular comfort and convenience features and the pricing adds up fast. That’s how they get ya.

Indeed, the Sport S I tested started at a reasonable $33,545. That gets you, among other things, a rearview camera, part-time four-wheel drive, heavy-duty Dana 44 front and rear axles, a 3.73 axle ratio,  17-inch wheels, all-season tires, skid plates for the fuel tank and transfer case, seven- and four-pin wiring harness, electronic sway control, and electronic roll mitigation.

Now it gets a bit confusing – the Monroney says that the truck is a Sport and the Customer Preferred Package 24S is a $3,200 option, but this package is necessary to turn a Sport into a Sport S. It adds power windows, aluminum wheels, power tailgate lock, heated sideview mirrors, remote keyless entry, alarm, leather-wrapped steering wheel, automatic headlights, sun visors, a heavier-duty suspension, and other goodies. The 7.0-inch screen infotainment system with UConnect, Android Auto, Apple CarPlay, air conditioning with automatic temp control, and satellite radio adds $995. 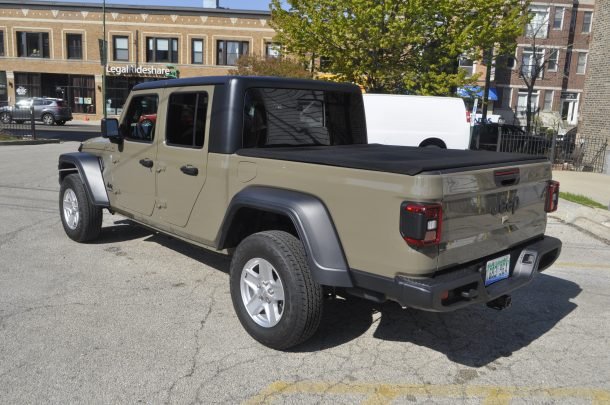 The eight-speed automatic transmission costs $2,000, and a roll-up tonneau cover is $595. The three-piece black hardtop with rear sliding window, rear window defroster, and storage bag is $1,195. Alpine audio cost $1,295 and a spray-in bedliner rang the bell at $495.

And much of what’s added is stuff most buyers would want and/or need. Maybe you don’t tow. Maybe you can sacrifice some of the driver-assistance goodies (I could do without ACC, which I rarely use except for testing purposes, though losing the collision warning is tough. We all let our attention drift sometimes). Maybe you don’t need the heavier-duty off-road stuff, or if you live in the Sunbelt, the cold-weather goodies. 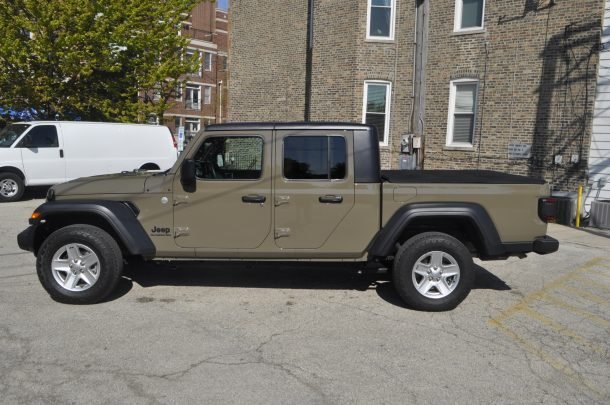 Me? I’d want the hardtop, tonneau cover, bedliner, and the nicer audio/larger infotainment screen on top of the S package. Plus, given that I live in the Snow Belt, I’d select the cold-weather gear. And since I drive on freeways a lot, I’d pony up for blind-spot monitoring. I’d also pick the headliner, and I might go for the in-bed outlet because it’s fun to tailgate, once we’re allowed to attend events again

Selecting the nicer UConnect system automatically adds some of these options, but I still would save some dough by not selecting the max tow package, ACC, or the heavier-duty off-road stuff. I’d also save $2K by rowing my own.

That does get you a decently equipped truck around $40K. Although adding the heavier-duty four-wheel-drive stuff will force you to buy the slushbox.

If you pick and choose your options wisely, you can have a decently priced urban runabout Gladiator, especially if you don’t mind rowing your own. But will have to give up some off-road and towing ability.

The choice is yours. As is the overall tradeoff that the Gladiator asks of you – will you sacrifice some on-road dynamics for off-road prowess and cool looks?

It’s up to you. Choose wisely.

Tesla reached a cumulative million of its new-format cells…