Wholesale values continue to rise, but the rate of increase is shrinking each week. However, the value increases are still considered extremely large for single week gains compared to a “normal” market. Retail inventory levels, new and used, continue to be a challenge and the limited availability of quality vehicles in the wholesale market is also proving to be a challenge for buyers.

Driven by an extreme shortage of rental returns and limited inventory of new vehicles, the price trends of newer used vehicles were experiencing larger weekly gains compared to the older units.  Within the last three weeks, newer used units reached levels that, in some cases, exceed new car pricing while the rate of growth has slowed for older units. For example, in addition to F150 Raptor, 2020-21 Chevrolet Corvette, and 2021 Jeep Gladiator and Wrangler, dealers are paying above MSRP for 2021 Kia Telluride and Hyundai Palisade, as well as other mainstream models.

The table below shows the average weekly price changes for 0-2-year-old vehicles.

2020 ended with used wholesale prices at elevated levels. With economic patterns (including the automotive market) driven by the pandemic, normal seasonal patterns (e.g. 2019 calendar year) in the wholesale market were not observed for most of the year. We saw a similar picture in 2009, at the end of the Great Recession. 2021 will not have typical seasonality patterns as the market is going through a rapid increase in wholesale values. The spring market arrived about 7 weeks earlier and with much stronger price increases compared to a typical pre-COVID year. The graph below looks at trends in wholesale prices of 2-6-year old vehicles, indexed to the first week of the year. Currently, wholesale prices are more than 23% higher compared to the beginning of the year (adjusted for the mix).

With the proliferation of ‘no-haggle pricing’ for used-vehicle retailing, asking prices accurately measure trends in the retail space. Retail demand slowed down at the end of last year, and thus resulted in declining retail asking prices over the last several weeks of 2020. As demand rebounded in January, retail prices seemed to lag wholesale prices – retail asking prices continued to decline throughout January and remained stable in February. March had an accelerated growth in retail prices, but the rate of growth is still lower compared to the increases of wholesale prices. In April, retail prices picked up speed as demand accelerated fueled by stimulus payments, tax season, and shortages of new inventory. Currently, the prices are more than 10% above where we started the year.

This analysis is based on approximately two million vehicles listed for sale on US dealer lots. The graph below looks at 2-6-year-old vehicles (similar to our wholesale price index).

Current used retail listing volume is about 15% below the start of the year, but the inventory levels stabilized in the last 4 weeks.

Days-to-turn have been decreasing since the middle of March, as retail demand picked up across the country due to tax returns and the additional round of $1,400 stimulus checks deposited into consumers’ bank accounts. 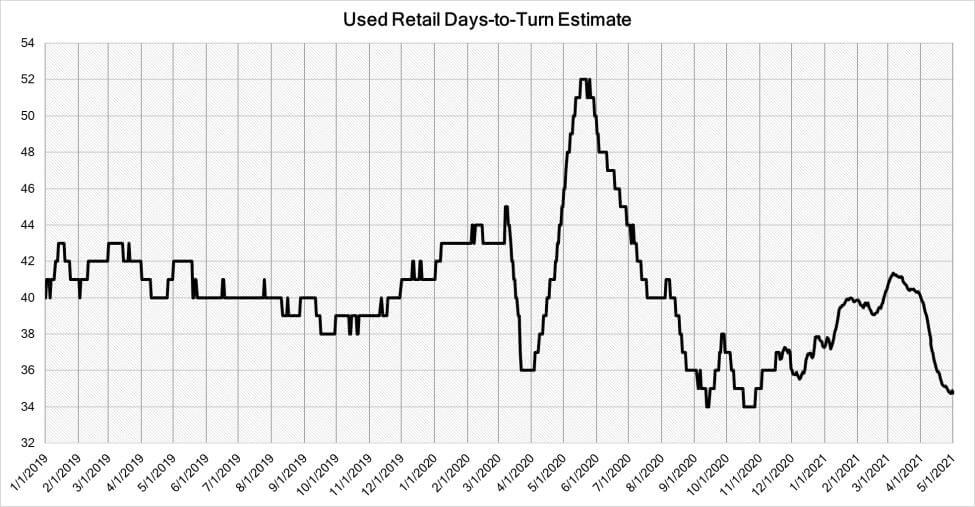 Originally posted on F&I and Showroom

GM Retools Supply Chain to Get Delayed Vehicles to Dealerships