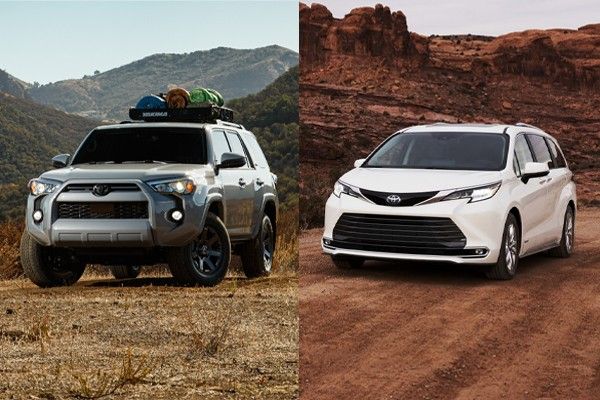 The 4Runner and the Sienna are among the most popular Toyota models of 2021. These vehicles offer the passenger space, comfort and convenience features that every decent family vehicle requires. But which one of these vehicles has the slight edge? Let’s take a look!

When buying a vehicle for the family, one of the biggest concerns is going to be the cost. Budgets will vary, but what is the best deal? The 2021 Toyota 4Runner and the 2021 Toyota Sienna offer comparable pricing but one of them certainly takes the cake.

Comparing performance on these vehicles is a little bit like comparing apples to oranges. The 2021 Toyota 4Runner features a 4.0-liter V6 engine that generates 270 horsepower and 278 lb-ft of torque. The Sienna features a 2.5-liter four-cylinder engine with two electric motors that generate a total of 245 horsepower and 175 lb-ft of torque. Drivetrain options for both vehicles include the standard rear-wheel drive or optional four-wheel drive. A five-speed automatic transmission is standard in the 4Runner and a continuously variable automatic is standard in the Sienna.

The clear winner in terms of off-road performance is the 270-horsepower engine of the 4Runner. This model provides a superior off-road experience because it is designed for just that. But if you will be doing all your driving around town, the Sienna is more than up to the task, offering athletic handling on the streets and highway.

Of course, fuel economy probably isn’t your biggest concern if you are looking for a powerful SUV built for roaming the outdoors, and with that said, the 4Runner is a viable option despite its fuel economy. But if you are just looking for a vehicle to pack the kids inside, the Sienna’s more impressive fuel economy is sure to help you get the kids to school, get to work, and run all your errands without having to fill the tank again and again during the week.

No family car is complete without a serious collection of interior features, and with the Sienna you get a whole lot more for your money. The Toyota Sienna comes equipped with a 9-inch touch screen, while the 4Runner features a slightly smaller 8-inch touch screen. They both have Android Auto, Apple CarPlay and Amazon Alexa AI integration, as well as features like satellite radio and keyless entry, but where the Sienna has the 4Runner beat is with its seven USB ports (versus four), tri-zone climate control, and more safety features.

Both the Toyota Sienna and the 4Runner offer a rearview backup camera, forward collision warning, automatic emergency braking, pedestrian detection, lane departure warning, adaptive cruise control and automatic highbeams. But also what you’ll get with the Sienna that you won’t get with the 4Runner are lane keep assist, blind-spot monitoring, rear cross-traffic alert, and road sign detection – all of which help keep you more alert on the road.

Now, one thing worth mentioning in terms of comparing these two vehicles is interior space. With all the seats folded down, you can get up to 88.8 cubic feet of cargo space in the 4Runner, which is pretty good, but as a minivan – the Sienna naturally offers more, giving you up to 101 cubic feet. the Sienna also offers more seating, allowing for up to eight passengers versus seven in the 4Runner – but only with optional back row seats. And because the 4Runner is smaller, the seats tend to be a little more cramped.

When it comes to performance, the Sienna and 4Runner have their own strengths. If you enjoy the outdoors, the 4Runner is your best bet, but if you are looking for something more practical for errands, the Sienna is an easy ride with a superior fuel economy. Both are loaded with safety features, but the Sienna offers just a little more, and when you consider that the Sienna also has a lower price tag, you know you are getting a whole lot more for your money.

EU proposes 2035 as the end date for internal combustion cars

VW Dealers To Get More Crossovers Because of Ukraine…