Dozens of Tesla owner complaints prompted an investigation into suspension issues for older model Tesla vehicles built in the early half of 2016, the NHTSA announced on Friday.

Regulators are investigating the 2015-2017 Tesla Model S sedan and 2016-2017 Model X SUV for a front suspension link issue that can cause the tire to rub against the wheel arch. Numerous similar complaints prompt a NHTSA investigation into a vehicle, which can then lead to the NHTSA recommending or forcing an automaker to issue a recall.

On Feb. 10, 2017, Tesla issued a technical service bulletin (TSB) informing dealers that the front suspension fore link can fail but the driver can still maintain control of the vehicle. Typically, a TSB addresses a recurring problem noticed in road testing by owners in the first model year of a new vehicle. A TSB isn't deemed a safety risk, and is usually guidance from automakers to dealerships to oil the squeaky wheel of the owner. Some automakers will advise owners to have the issue fixed by dealerships within a certain timeframe.

Tesla owners logged 43 complaints on the left or right front suspension links, with 32 of those complaints citing link failure during low-speed parking maneuvers. The other 11 complaints identified a failure that happened while driving above 10 mph, including four at highway speeds. There may have been more complaints for the issue, but they have not been corroborated by visual proof or repair records.

The NHTSA said "the complaints appear to indicate an increasing trend, with 34 complaints received in the last two years."

The vehicles under investigation total nearly 115,000 Tesla electric cars, according to Autoblog.com.

It could take a while for the NHTSA to make a determination that could lead to a recall; the 2015 Tesla Model S and 2016 Model X are under four pending investigations, including one the NHTSA opened on Oct. 1, 2019 for software updates. 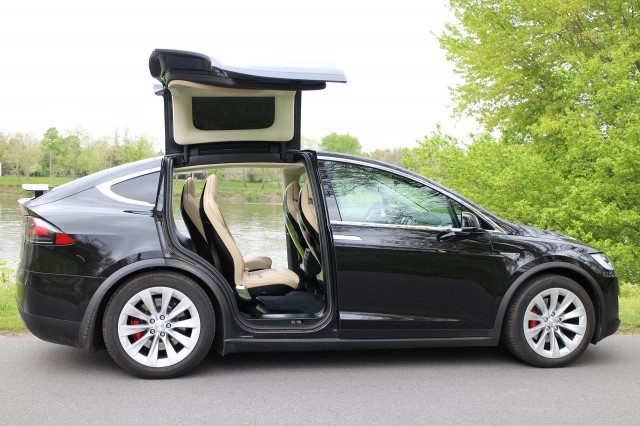 In a separate case, the NHTSA last week announced the recall of the 2016 Tesla Model X three-row SUV because cosmetic pieces of the roof may separate while the SUV is in motion. Two pieces of cosmetic trim can come unglued because primer wasn't applied before adhering them to the roof. One is a front applique affixed between the front of the roof and the windshield, and the other is a spine applique located in the middle between the pieces of falcon door roof glass. Though the NHTSA cited no known crashes or injuries, the pieces can fly off the car and create a road hazard for following motorists.

Owners may see the applique coming loose or hear an unusual noise inside the cabin. The recall applies to 9,136 Model Xs, but a software update won't fix this one. Owners will need to visit a dealership, and the necessary fix will be performed free of charge. Owners can visit Tesla's recall page or call Tesla customer service at 1-877-798-3752. Tesla's number for this recall is SB-20-12-005.

The same 2016 Model X is also under investigation for the suspension issue noted above. This is the fifth recall of the Model X, but there could be more due to four open investigations. In a similar but separate case, the NHTSA announced last week the recall of the 2020 Tesla Model Y for a suspension issue. The compact crossover may have loose bolts connecting the control arm and the steering knuckle on the front axle of models built between Aug. 28 and Nov. 6 2020. Owners may notice excessive vertical tilt or camber of the front wheels, excessive noise from the front suspension, and the steering performance can feel off.

Tesla reported no known crashes or injuries of the 437 units recalled. Owners will be notified by mail and, if the vehicle is in the affected class, it will need to be taken into a dealership for a fix under warranty. Owners can visit Tesla's recall page or call Tesla customer service at 1-877-798-3752

QOTD: Level-set for the C8 Vette?

Volkswagen Experiences Déjà Vu in the European Court of…