Camper manufacturer Colorado Teardrops this last week revealed a small-footprint teardrop-style camping trailer that’s configured to get over the hurdle of dramatically lower range while towing with an electric vehicle—by carrying extra batteries to recharge the EV along the way.

The model, called Boulder, packs a generous 75 kwh of batteries in its lower frame area—within a few kwh of the usable capacity of the growing group of compact electric crossovers rated for towing, including the Volkswagen ID.4, Tesla Model Y, or Volvo XC40 Recharge.

Once charged up, with a CCS-format DC fast-charger, the setup will be able to deliver DC fast-charging output at up to 60 kw, or potentially a boost of 100 miles of range in 10 minutes, the company claims. And to clarify, this is at rest stops; the trailer can't charge the vehicle while in motion. In short, you might need to stop and charge twice as often, but you’ll still make it to all the usual charging stops—where you might potentially need to charge up two “devices.”

That’s a different, simpler philosophy than the E.Home Caravan electric trailer revealed last month by the German travel-trailer and EV maker Dethleffs, which with auto-tech supplier ZF engineered a trailer that provides its own electric propulsion, too—essentially allowing towing while maintaining the original range or possibly even extending it.

The advantages of the Boulder aren’t limited to recharging the towing EV, though. The 12-volt DC and 120-volt AC power takeoff capability that’s potentially included with the setup is a solution for off-grid camping and other uses—maybe even home backup in a future application.

Including the battery pack, the trailer’s dry weight is listed at just 1,950 pounds, with a tongue weight of 185 pounds. It notes that the setup is built around a suspension capable of 3,500 pounds. Aerodynamically shaped “teardrop” travel trailers such as this have otherwise long been a favorite of occasional campers for decades, because they can be towed with a smaller vehicle without making a huge dent in range and efficiency.

The company claims that with that, it will restore EV ranges back to what they would have been pre-towing—or better—and because of that it’s likely to be used more often.

Colorado Teardrops says that the Boulder will park in a home garage, and yet the hard-shell cabin is large enough for a family of four, including a queen-size mattress plus bunk beds, a dining area with couches, a hot-water shower, and interior climate controls. There’s also a fold-out exterior kitchen galley, and the company is working on a coordinated inductive cooktop to avoid combustion—a plus for camping in fire-prone regions. 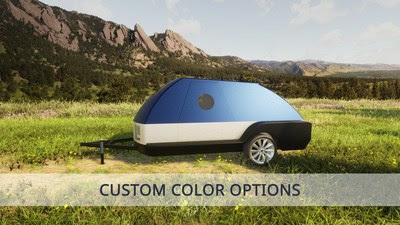 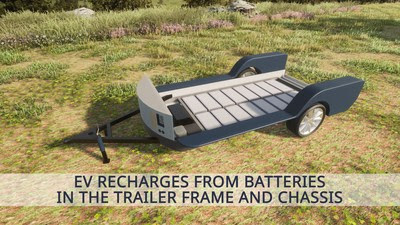 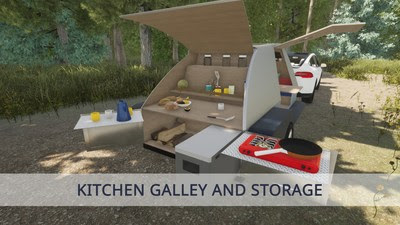 This isn’t a new idea, however past companies that have claimed to commercialize it haven’t delivered more than a handful of such units. This time, however, an established camping-trailer company is taking up the task. Colorado Teardrops told Green Car Reports that it’s aware there may be some regulatory work to be done so that the EV market can keep evolving. “We are committed to serving the electric vehicle industry and really excited to be a part of its growth,” said spokesperson Joshua Robinson.

Although giants like Airstream are pursuing electric travel trailers, there’s nothing widely available or mass-produced like this today, either. For personal use and non-commercial applications, Robinson said that it isn’t aware of any state or federal rules that might get in the way of the product, and it will follow UL, DOT, and SAE rules and regulations. 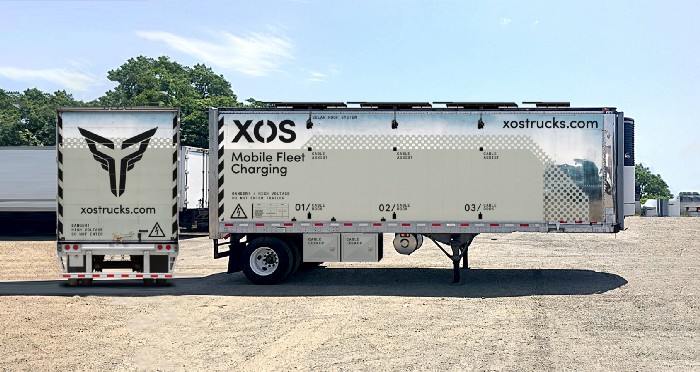 Those commercial applications are coming, too—fast. This past week the electric commercial vehicle startup Xos Trucks revealed Xos Hub—essentially a semi-truck trailer full of batteries and what’s needed for fast-charging. The Xos Hub can plug into existing infrastructure without permits, that company says, and charge up to five trucks at once.

In these products and more, there’s a growing awareness that mobile charging solutions may be what helps EVs click for some households or companies. Carrying around huge batteries for unnecessarily long driving range year-round doesn’t make much sense—just as driving a vehicle with extra jerry cans full of fuel year-round wouldn’t. But expanding that capability for special occasions—maybe with rentals of solutions such as this—is essential to convince more people they don’t need to keep the gasoline vehicle around as a tow rig.

Opinion: EVs Should Not Get More Government Incentives

How You Can Prepare Your Dealership As the World Reopens