Not all Volkswagen Taos crossover SUVs are built equally. Depending on the review you read or the Taos you test drive, the drivetrain creates a key differentiator hidden in its middling TCC Rating of 6.2 out of 10.

Choosing all-wheel drive or front-wheel drive in this small VW crossover has big implications not just on how it drives, but how it handles.

The 2022 Taos checks in as a simple and honest crossover with great outward vision and easy-to-use controls, but all-wheel drive is a must for its rear suspension upgrade and there’s no fixing the laggy turbo powertrain.

Here’s what I learned, and you need to know, after spending a week with the 2022 VW Taos 1.5T SE with all-wheel drive. 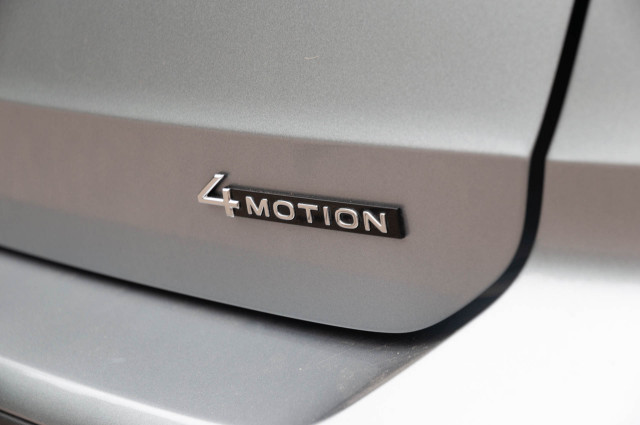 Sure, front-wheel drive and a good set of winter tires would add grip and improve handling from the basic torsion-beam rear axle, but all-wheel-drive models feature a more sophisticated multi-link rear suspension system. It’s well sorted with a firm tune that isn’t harsh over broken midwest pavement. There’s noticeable body roll around corners, but the motions are controlled. Editor Brian Wong noted front-wheel drive models feel less confident, almost as if they are dragging the rear wheels around. This isn’t the case with the all-wheel-drive model. Miss: Wait for the lag

The punchy turbo-4 makes 158 hp, but front-wheel-drive models hook to an 8-speed automatic while AWD versions use a 7-speed dual-clutch automatic. The 7-speed does nothing to hide the turbo lag that presents itself until the snail starts huffing at about 2,100 rpm. It takes too much effort, and it usually fails, to extract a smooth launch from a stoplight or stop sign. The Taos just leaps forward once the boost kicks in and the transmission gets its act together. 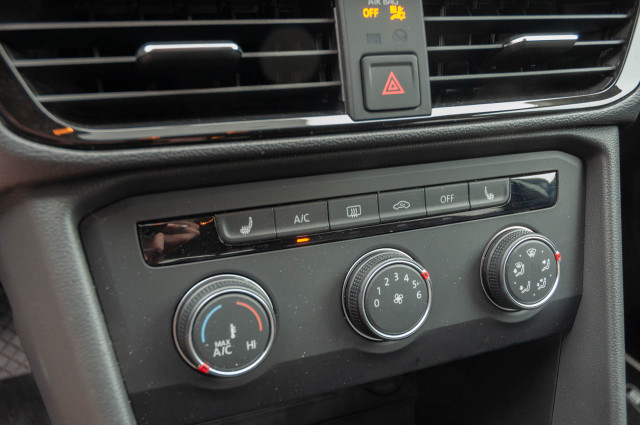 Kia has a strange radio interface with mock digital amp tubes, glowing on the infotainment screen and trying too hard. The Taos’ interface is simple and honest, kitsch-free. My $29,890 SE AWD model featured wireless Apple CarPlay and wireless smartphone charging that worked flawlessly each and every time I started the car, just how it’s supposed to. The 8.0-inch touchscreen’s interface is easy-to-use and features volume and tuning knobs, all of which can’t be said for VW’s latest touchscreen in the ID.4 electric car and GTI hot hatch. And the 8.0-inch digital gauge cluster offers three layout options, all of which are simple and easy-to-read at a glance while driving. The Taos has what might be the loudest turn signal notification on any modern vehicle. It’s borderline obnoxious and intrusive. It’s almost as if Volkswagen went and sought out the least expensive relay in the world. Today’s automotive design timeline is one of overwrought interiors, shiny piano black plastic, and high beltlines paired with low rooflines. The Taos has none of that nonsense. The dashboard is simple and has easy-to-use controls. It’s refreshing. The dashboard on my SE Taos featured blue trim that added interior flair, and every single window switch on the driver’s door featured one-touch control, which is an incongruous premium feature for the Taos. The windshield is seemingly massive as it’s both tall and wide. Paired with thin A-pillars and tall side glass, the Taos provides excellent outward vision. The rear seat’s impressive packaging leaves plenty of room for two adults, or three in a pinch. But those in back won’t be nearly as fond of the Taos’ materials or design as those in front. The blue trim found up front isn’t continued in back on the rear doors, which almost makes it feel like the rear doors aren’t from the same car as the front doors. The rear doors also lack the soft-touch materials found on the front doors, so passengers will want to watch those elbows. The plastics in the Taos look cheap, and lack the nice design found in the Ford Maverick.

How to Manage your Dealership’s Insurance Claims

Interest Rates are Steady, But Experts Ponder for How Long

Green payback: How long will new EVs take to be cleaner than…

California hit a cumulative one million plug-in vehicles, as…