The 2022 Volkswagen Taos enters the small crossover segment with a big chip on its shoulder. Sized below the Tiguan, the smallest VW crossover is larger than other competitors such as the Chevy Trailblazer, Ford Bronco Sport, and Hyundai Kona. Yet its new turbo-4 engine and 8-speed automatic transmission don’t sync in some situations, which is partly why it earned a middling TCC Rating of 6.2 out of 10.

I spent a week in the 2022 Taos SE mid-grade trim with front-wheel drive, which means it comes with the 8-speed and torsion beam rear axle instead of the 7-speed dual clutch automatic and multi-link rear suspension on the all-wheel-drive model. The size worked well for me, but the powertrain favors patient drivers. The Taos looks like a slightly smaller Tiguan. The boxy rear, creased hood, and modest black cladding over the wheel arches and rocker panels play the SUV part. There’s nothing flashy about the Taos, and that’s what I appreciate about it. The fake skid plates front and rear could pass for real, and the mesh-patterned lower grille is well executed. Where many other crossover SUVs wear fake air intakes, those on the Taos really let air pass through to the black 18-inch front wheels.

Inside, the blend of synthetic leather and cloth seats with white accent stitching underscores an understated interior that lets its big proportions speak for itself.

Volkswagen makes ‘em big, moreso than Honda and Chevrolet. The Taos is more than 9 inches shorter in length than the Tiguan compact crossover, which is large enough to wedge in a third row on front-wheel-drive models. The wheelbase is only about four inches shorter than the Tiguan, however, so interior space remains expansive, especially when compared to rivals occupying the gap between subcompact and compact crossovers. The 37.9 inches of rear leg room edges the Toyota RAV4, and head room appears to top the class, so seating for four is easy and five is doable. 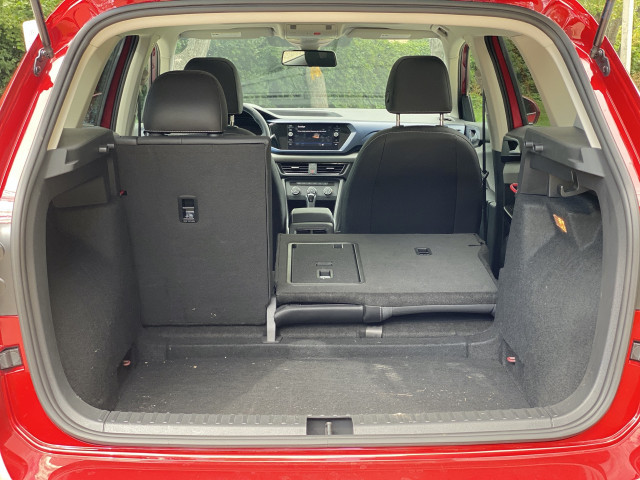 We hauled my daughter’s massive hockey goalie bag with the rear seats up, and could have added another one on top if we needed to carpool. It holds 27.9 cubic feet (AWD models hold 24.9 cubic feet). With the gear in back, a run to Costco was manageable with a third passenger and the larger portion of the 60/40-split rear seat folded down.

The wireless smartphone charger located at the base of the center stack has a wide and tall opening, so it doesn’t feel wedged ahead of the gear lever as it does in other small crossovers. Large door pocket storage and deep storage cubbies in the cargo area ensure that all the gear, groceries, hydroflasks, pocketbooks, and ephemera have a place.

Press the gas and it’s “Ready, set, go [wait for it…] !” The Taos uses a 1.5-liter turbo-4 that makes 158 hp and 184 lb-ft of torque, and serves as the base engine for the VW Jetta. The turbo lag, or that hesitation when you press the throttle before the engine charges ahead, is not uncommon in entry-level cars prioritizing efficiency over performance. But the lag coupled with impressive low-end torque that comes on as early as 1,750 rpm makes for some inconsistent driving motions. Off the line, once the turbocharger spools up and boosts the engine, there’s enough torque to spin the front wheels. But if you’re at a stop sign turning against oncoming traffic, the hesitation followed by wheel spin can make even aggressive drivers think twice about the gap in traffic.

The engine’s incompatibilities with the 8-speed automatic are more pronounced while cruising and going off and on the throttle. In situations when the lead car slowed to change lanes or turn, I’d let off the gas, then when the lane was clear, I’d reaccelerate. Due to the turbo lag, when the torque came on it jerked the car forward. With steady, linear pressure on the throttle, the transmission shifted smoothly. A sport mode on the gear lever delays shifts but doesn’t smooth over the jerkiness, nor does the faux manual mode. Over time, I might have gotten better at modulating the throttle after laying off, but after a week I was done trying. 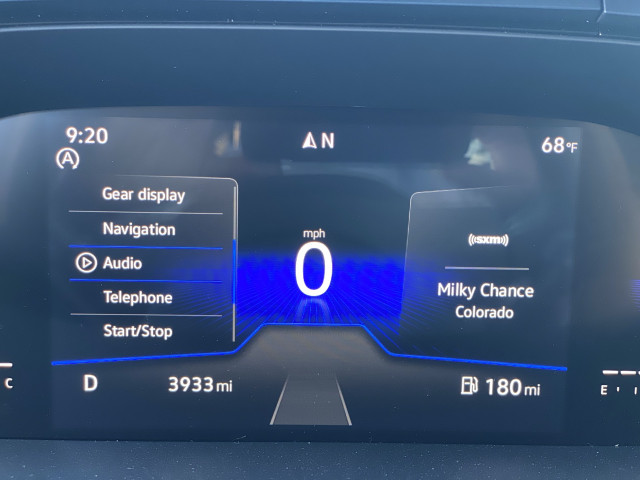 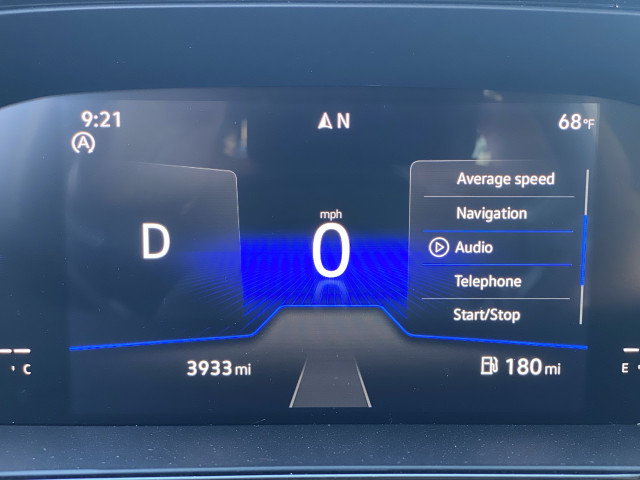 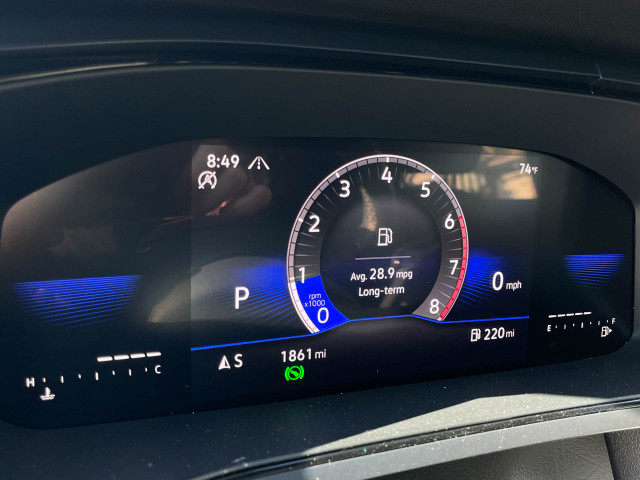 Volkswagen revamped its in-car technology recently on new cars such as the Taos, which gets an 8.0-inch digital instrument cluster. The flanks are blank in the Taos SE because it’s housed in the same display space as the optional 10.3-inch display on the loaded SEL. Still, the ability to change the twin peripheral displays to one of nearly a dozen readouts, ranging from navigation to gear position to audio, gives the driver a more personalized connection.

The SE came with a familiar 8.0-inch touchscreen, with wireless Apple CarPlay and Android Auto and a wireless smartphone charger. Voice commands were excellent, but satellite radio was slow to load and took too many button presses to scroll through stations. Best to just lock in the presets.

The well-equipped SE model makes a compelling choice for shoppers who want a small footprint with a big shoe, but who don’t care to tread too aggressively.