Reputations are a hard thing to build and an even harder thing to shake. When the Lexus NX arrived in 2014, the compact crossover was intended to bring some youthful swagger to a brand favored by a quieter, comfier, stay-off-my-lawn kinda owner. Though a strong seller, the technology tried satisfying too many generations without pleasing any one.

That’s changed for the redesigned 2022 Lexus NX, and the timing couldn’t be better. Gone are relics such as the CD player and touchpad controller, replaced instead by an intuitive 14.0-inch touchscreen and voice commands so good they make me believe voice is the future of infotainment.

Four powertrains ranging from an entry-level 2.5-liter inline-4 to a plug-in hybrid based on the excellent Toyota RAV4 Prime cast a wide net of appeal, and F Sport trims give it an edge in looks if not performance.

I tested the volume model, the 2022 Lexus NX 350 with all-wheel drive. Lexus loaded it with the Luxury package with everything from 20-inch alloy wheels to open pore wood trim and comprehensive tech and safety features. Impressions were mostly positive in our family of three, including two that haven’t aged into driver licenses but appreciated all the tech except for the digital door handles during our week of testing.

A standard 9.8-inch touchscreen or available 14.0-inch touchscreen center the interior. Developed in-house at Toyota Motors North America, it fixes every wrong of its predecessors, so much so that it feels like it’s from a different car company. The larger screen in the car I tested cants toward the driver and sits in an odd housing, serpentining around the center stack and under the vents and climate dials like a question mark.

Fortunately, the large screen dominates your vision. A menu bar on the left keeps it simple, and even with the welcome climate dials, the lower portion of the screen remains climate and seat settings unless navigation or map views are selected, which can take over the full screen. The screen layout is customizable, clear, bright, and relatively simple. It’s nothing like what preceded it. It comes with cloud-based mapping and over-the-air updates, and wireless Apple CarPlay and Android Auto are standard. Personalized profiles can transfer from one Lexus vehicle to another.

The irony of the much improved touchscreen is that the voice commands are so good they make the touchscreen redundant for most everyday functions. “Hey, Lexus, find tacos,” returns Siri-like results. It helps me believe that voice commands will overtake touchscreens as the driver’s main source of interaction with infotainment. 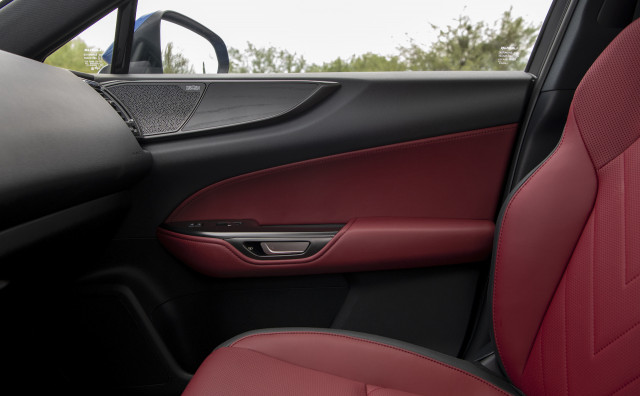 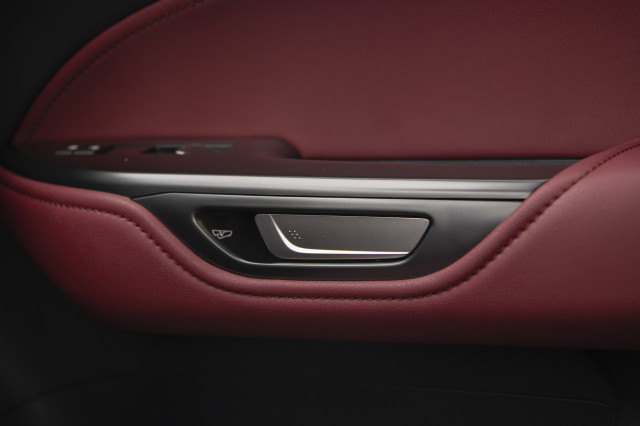 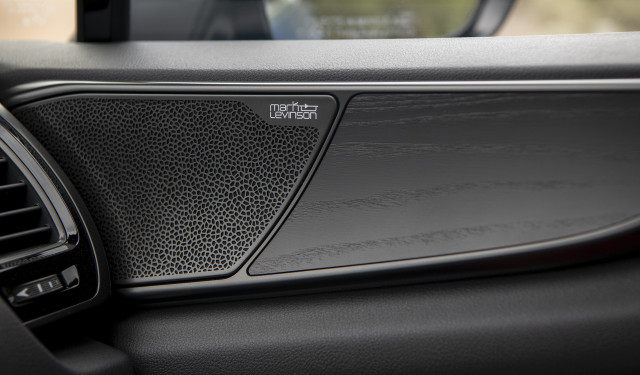 My Gen Z teens did not appreciate the push-button door handles. On the inside, a button in the door armrest perfectly placed for the thumb lets you click the door open without much effort. My kids and other Zs twisted their hands this way and that to get a handhold, and went beyond the usual grunt of disapproval to utter the word, “stupid.” I loved the simple ergonomics of it.

From the outside, a pull of the handle recognizes the key fob and is supposed to unlock the door, but on more than one occasion I had to pull, relax, pull again.

The NX grows about an inch longer and taller, with that extra space benefitting front riders. Cargo room increases nearly five cubic feet to 22.6 cubes behind the 60/40-split rear seats. We fit three carry ons, three backpacks, and three winter coats without creeping up over the rear seats. An underfloor storage recess adds an option for wet, dirty, or confidential belongings. My daughter’s hockey goalie bag required me to fold down the seats, which usually doesn’t happen with other compact crossovers. With the seats flat, there’s less space than in the last generation, down to 46.9 from 54.6 cubic feet. The 2022 Acura RDX has 58.9 cubic feet of space behind the front seats, and the 2021 Volvo XC60 has 63.6 cubic feet.

Of the four powertrains, the NX 350’s 217-hp 2.4-liter turbo-4 is the volume leader. It might be the noise leader, as well. This engine has more buzz than a barbershop; it’s not loud unless hammered, but it’s present during all but the lightest throttle taps. In Sport mode, which tweaks the engine and transmission mapping, the 8-speed automatic serves up 317 lb-ft of torque in responsive doses. Lexus says it goes from 0-60 mph in 6.8 seconds. It felt like it on the ramp, but when turned to Eco mode the wind left the sails. 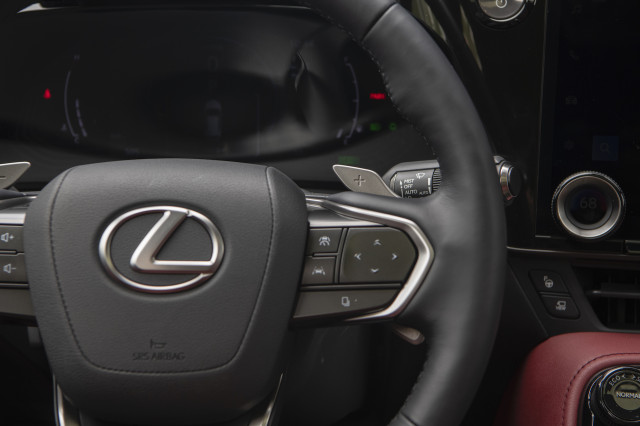 The head-up display might be one of the best on the market. The iconography is bright, clear, and large, navigation cues unmistakable. It’s much safer than looking in the instrument cluster or touchscreen and adds yet another layer of technological sophistication and safety in the NX.

The HUD comes with an interesting counterpart: The only icons on the steering wheel controls are arrows. When you hover a thumb or finger over the left control, for instance, the icons for voice, call, and volume appear in the head-up display; the right pad is for driver assist features or audio tuning. Leaving the icons unmarked on the steering wheel allows for increased functionality with future over-the-air updates. And it’s dynamic. Make a call, and the down button switches to “hang up.” I got used to volume and tuning by the second day. The driver-assist commands took a bit longer.

The redesigned NX might not be as quiet as the Lexus of old, but it has remade the brand as a leader in voice commands and other driver tech. That’s a welcome about-face, but it comes with a higher cost and a steeper learning curve.

The misses: Buzzy turbo-4, can get expensive