A lot of America isn’t ready to make the move to a fully electric car. With fast charging networks in their infancy and many people driving farther than across town in middle America, a stopgap is needed on the road to electric cars.

The 2021 Toyota RAV4 Prime plug-in hybrid is the perfect stopgap with a usable range of 42 miles and all-wheel drive for changing weather conditions.

The plug-in hybrid features great performance, an attractive design, and creative interior materials, but it can be expensive, there are some cheap interior bits, and the plug-in hybrid isn’t widely available right now.

I recently spent a week with the 2021 Toyota RAV4 Prime hauling the kids around town, picking up groceries, and driving to doctors appointments to realize it’s the ideal solution for many Americans’ needs. 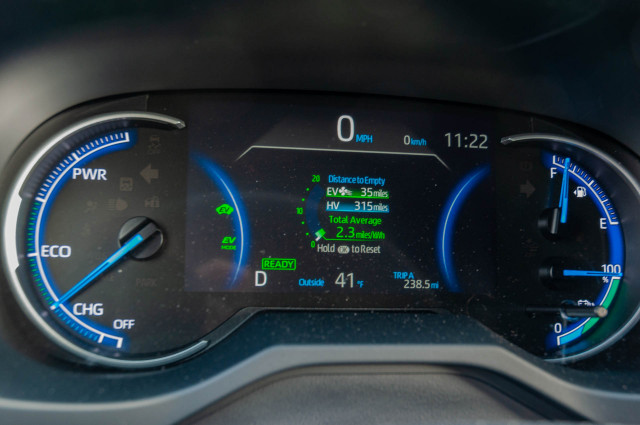 Hit: It has real, usable range

With an EPA-rated 42-miles of range most Americans will be able to get to work and back on a single charge in all-electric mode. If they charge at home overnight, a single drop of gas won’t be needed Monday through Friday, and that’s if the workplace doesn’t have an electric car charger. With temperatures in the low 30s it averaged over 40 miles on a single charge despite listing a 38-mile range on start up. (regenerative braking that adds juice back to the battery pack is a heck of a thing). It could probably eek out a bit more with less suburban highway driving and more stop-and-go traffic. Run out of juice? The gas 4-cylinder will kick in and the RAV4 Prime turns into an expensive hybrid that gets more than 30 mpg in my experience, though the EPA says it can get up to 38 mpg in hybrid mode. 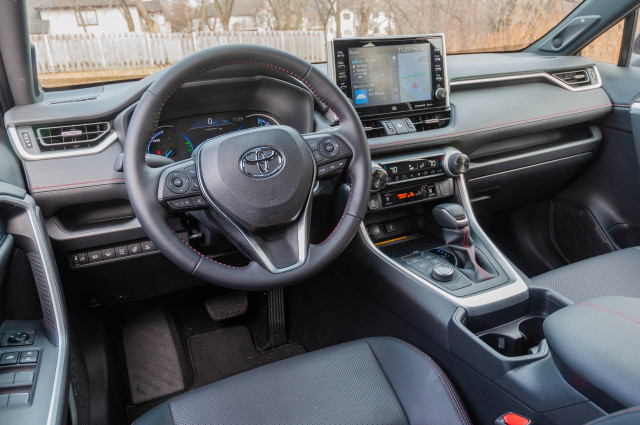 A plug-in powertrain doesn’t fix the steeply raked A-pillars that makes hitting your head a sort of un-welcome greeting when getting in, or the hard, cheap plastics inside on the center console, or the tinny, cheap sound the doors make when they are closed. 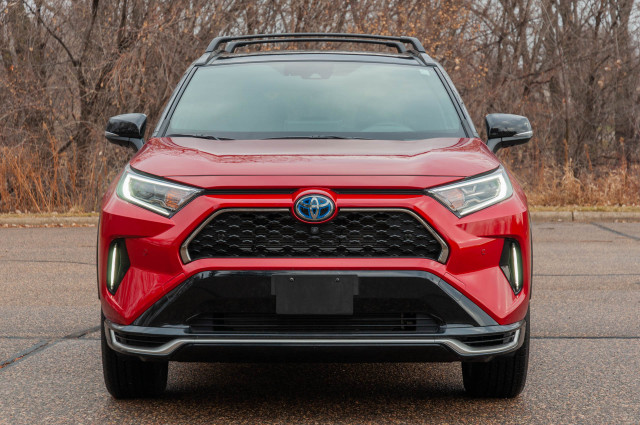 The current RAV4 is quite attractive given the model's history. Its blocky, chunky exterior design gives off a baby 4Runner vibe. With off-road capable SUVs being the hot things (hello, Bronco), the RAV4’s design appeals. Better yet, the Prime plug-in model loses none of that appeal. Aside from Prime-specific wheels, an extra fuel filler flap, and a few badges, no one knows this is a plug-in RAV4 from the outside. 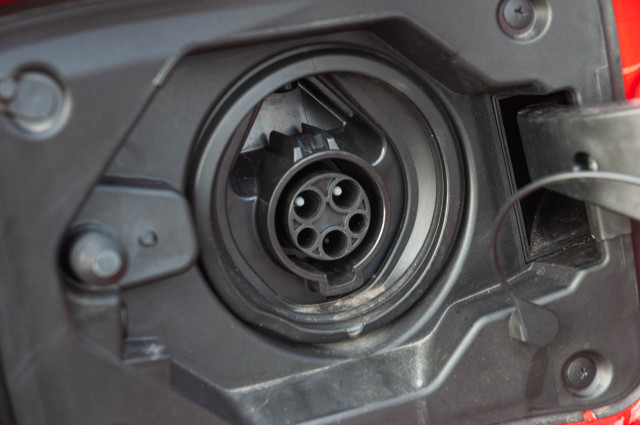 Miss: Budget for a Level 2 charger

The RAV4 Prime is a plug-in hybrid, not an electric car, but you’ll still want to budget $1,000 for Level 2 charger 240-volt charger plus installation On the 120-volt charger (Level 1) charger that every RAV4 Prime comes with it will take a full 12 hours to charge the empty battery. I tested it multiple times in my home garage, and it’s consistent with that 12 hours. The standard onboard 3.3-kw charger with a 240-volt Level 2 charger will drop that time to 4.5 hours. An available 6.6-kw onboard charger takes just 2.5 hours. 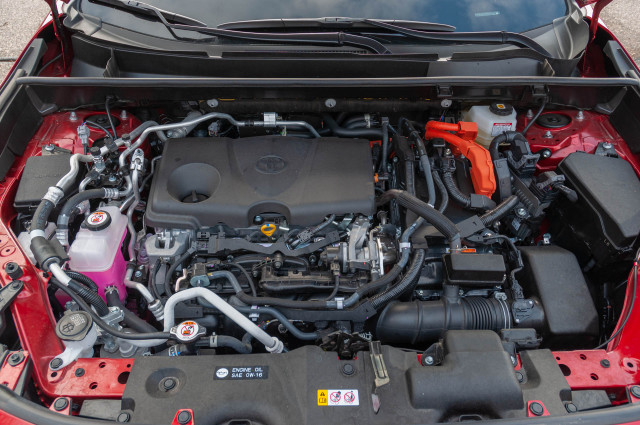 The plug-in hybrid powertrain produces 302 horsepower. Toyota said it takes 9.2 seconds to sprint from 0 to 60 mph in all-electric mode, but that time drops dramatically to 5.7 seconds when the Prime’s in hybrid mode. It’s shockingly quick. For perspective, that’s quicker than a Volkswagen GTI hot hatch. It’s actually, dare I say it, fun. Hit and Miss: It’s expensive and a value

The 2021 Toyota RAV4 Prime costs $39,220, including the $1,120 destination fee. My tester was a loaded XSE model with a price of $49,578. That netted a premium audio system, heated leather-trimmed steering wheel, special red paint, and 10-inch color head-up display among other things. At nearly $50,000 the RAV4 Prime is up against luxury vehicles in price, but the interior and build quality isn’t that of a luxury vehicle. At $39,220 it starts to make more sense, and if one can take full advantage of the $7,500 federal tax credit it suddenly could be less expensive than a nicely equipped RAV4 Hybrid model. Then it makes a whole lot of sense at $31,720. With the full credit, the RAV4 Prime seems like a value. 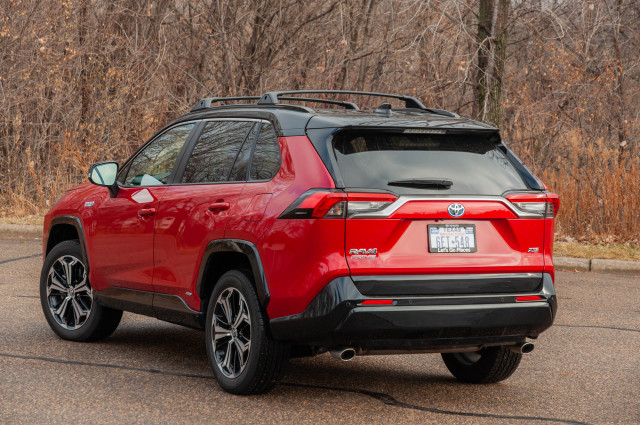 Toyota originally planned to sell 5,000 RAV4 Prime models in the U.S. in 2020 with a ramp to 20,000 annual RAV4 Prime sales. For perspective, Toyota sold 92,525 RAV4 Hybrids last year and nearly 450,000 RAV4s combined. Those were the before times. The current state of the world has created a supply pinch for the liquid-cooled lithium-ion battery packs. Dealers are aware of this situation and are taking advantage of the situation with markups of more than $10,000 slapped on the hood of these plug-in crossover SUVs. It’s also possible that Toyota underestimated demand for its plug-in crossover SUV. Available nationwide, it’s hard to find one and even harder to find a deal on one.

The 2021 Toyota RAV4 Prime is the perfect vehicle for those who loved the idea of the Chevrolet Volt but wanted all-wheel drive and Toyota reliability. It allows most people to ditch gas during the week but never feel the burn of range anxiety or fear taking a long road trip. It’s the perfect stopgap.

vAuto and Ford Credit Collaborate to Connect the Right…