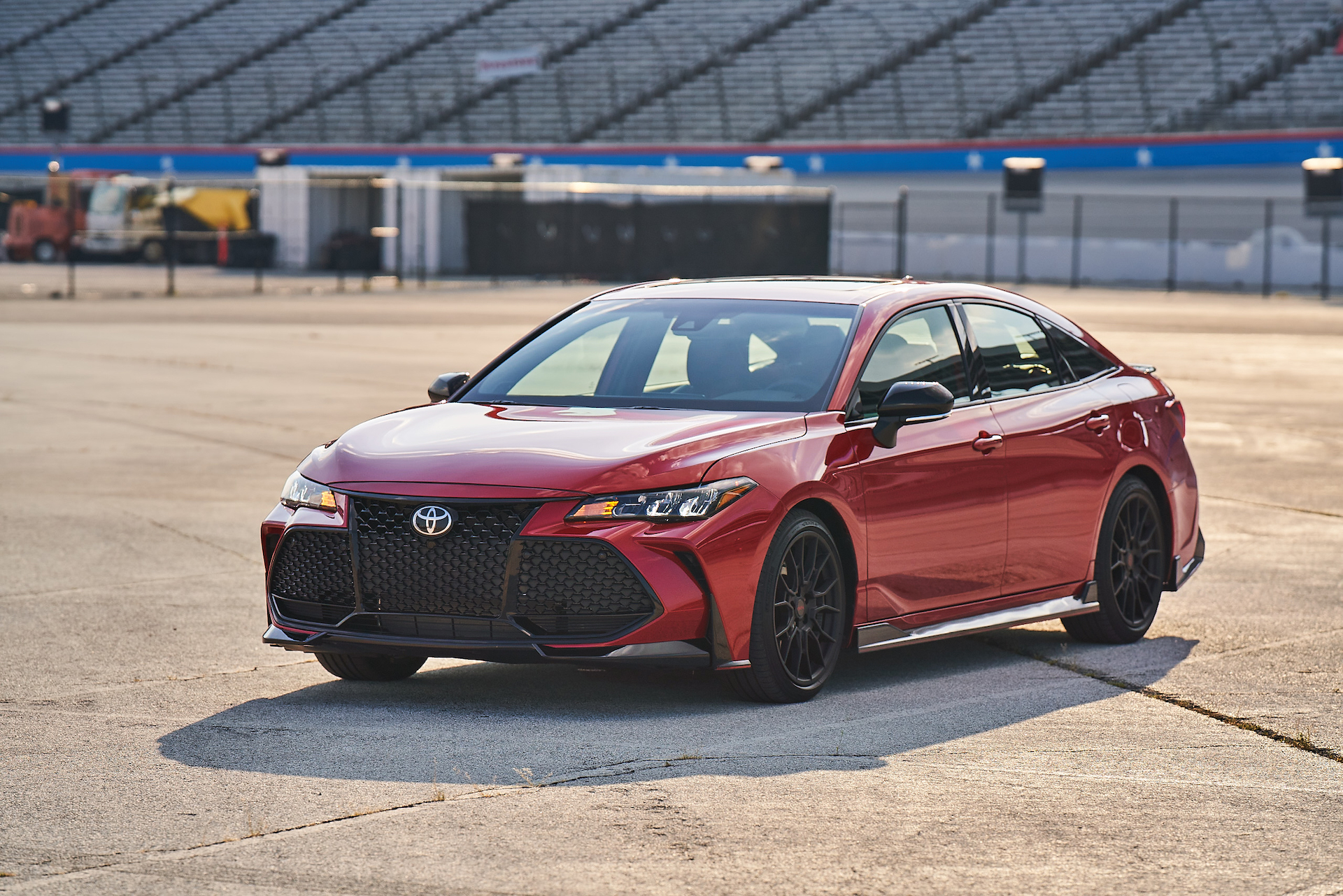 When we first drove it on the track, we wondered out loud whether a car like the 2021 Toyota Avalon really needed the TRD sport-sedan treatment. The Avalon's prime directive has always been to coddle its passengers in a cocoon of sound deadening and sensory deprivation, without costing them too much: Lexus lite.

That began to change with the last Avalon, and in the current generation the TRD (the acronym for Toyota Racing Development) edition signifies more progress in turning the full-size sedan into something with a measurable pulse.

We knew what it felt like on a track. But what's it like on the road? A week spent hurtling out of lockdown's penumbra tells us more clearly how the 2021 Avalon TRD wants to show it can keep up with the younger generation. It's nip here, tuck there, vitamin shots all around.

It may make you groan at first pass, but deep down and later on, you admit it’s...good. It's the dad joke of sedans.

Here's where those punchlines landed—and where they fell flat.

Hit: It’s a passing machine. The Toyota Avalon doesn't need any more power than it already has, and TRDs don't get anymore. Fine. Is 301 hp enough for you? It is. Even in non-TRD form the Avalon's a passing machine, able to flip down a few gears of its marvelous 8-speed automatic and pick off stray Priuses like a predator doing us an evolutionary favor. Shift paddles sit in wait of your attentive touch. The oddities are few but stark: The TRD doesn't get the adaptive dampers or the Sport+ drive mode found in the Avalon Touring. Whahuh?

Hit: It's alive. The little burping and pinging off idle? It's something called exhaust noise. Owners of older Avalons might be momentarily frightened by the growly sound, but the cat-back exhaust lends the V-6 a throatier howl, from a rumbling at idle to a refined ripple under full acceleration. Flick the gas. Live a little.

Miss: Friction-free driving is gone. This is no longer the Avalon that sedates you with a Propofol ride. If you seek amiability, it's in the base cars. This one's crisp, insistent, attitudinal. It's impossible to engineer vehicle dynamics to sharpen its edge and cushion its ride without an expensive set of adaptive dampers or air springs—and the Avalon TRD's already at its limits of price sensibility. What we're left with is a happy but still mushy medium: cheese grits offered to polenta palates. And yet...

Hit: Rounded-up handling. It'd be easy to ruin the Avalon's placid ride with a conventional steel suspension, but it doesn't happen here. The Avalon sits about a half-inch lower in TRD form, and adopts stiffer front and rear shocks, and gets stronger underbody bracing. The Avalon TRD also rides on 19 x 8.5-inch alloy wheels, up a half-inch in width over the Avalon Touring. We would hesitate in calling it agile, but the Avalon TRD's flatter responses and precise if not touchy-feeling steering is a breath of pure oxygen compared to the chromed-up Avalon sleep chamber we drove for the first time in the early 2000s. The somnolent effect's still wearing off from that one.

Miss: TRD drag sets it up for failure. My car showed up with chalk-gray paint and red brake calipers. You know, like a Porsche 911 Turbo S. The Avalon cabin bristled with lipstick-red stitching and TRD headrest logos and red seat belts, and its track-time teases don't play out in real time. The expectations soar above the reality. (Would we order ours in that scheme? Absolutely.)

Hit: All-day seats. Not every sporty car needs carbon-fiber racing shells to get its point across. The Avalon TRD's front buckets have deep but soft bolsters and lots of adjustment. The Avalon TRD might not be able to overcome an S7 on a track, but it can outmaneuver moderate arthritis.

Miss: We can't figure out our feelings. The Avalon TRD costs $43,255, about $200 more than a more appropriate feeling Avalon Touring. The latter doesn't send any mixed signals; the TRD's nothing but crossed wires and static. We can't help but love it anyway. It's a sweeping interstate cruiser and a Tupperware container for the misspent leftovers of our 20s. It doesn't have to exist, and maybe no one would miss it if it didn't stick around. But the 2021 Avalon TRD's a good reminder that youth doesn't have to be wasted entirely on the young.

2023 Chevrolet Corvette Z06 Brings the Track to the Street

Product Prep Keeps Automotive Pros on Top of Their Game as…

Touch Down: Why Advertising at Football Games Is a Winning…