The Nissan Armada has always had a gem of a V-8 engine and a big tow rating, but its technology has been stuck a decade behind for years.

The Armada’s glaring issue has been fixed for 2021.

The 2021 Nissan Armada arrives with a modest refresh that adds an infotainment system that’s from this era, a simple and smooth powertrain, and a comfortable interior. But it still lags competitors in packaging, fuel efficiency, and technology.

The 2021 Nissan Armada has a TCC Rating of 5.8 out of 10, which trails the Chevrolet Tahoe, its twin the GMC Yukon, and the Ford Expedition. The only direct competitor it bests is the Toyota Sequoia, which came out in its current form a decade and a half ago.

I spent a week shuttling the kids to camp, running errands, and road tripping with the family to find where the 2021 Nissan Armada hits and misses. 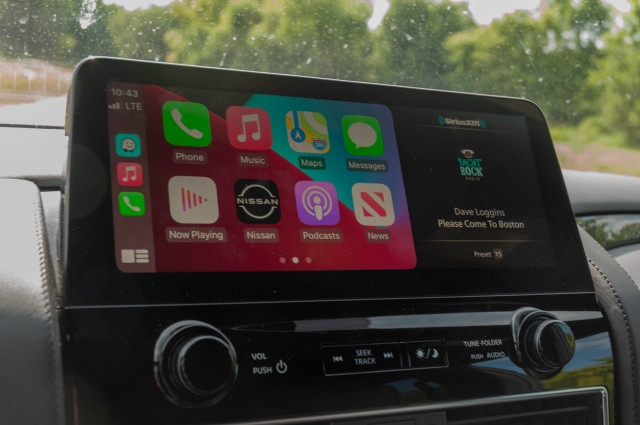 Hit: An infotainment system worth using

It only took until 2021, but the Nissan Armada finally has Apple CarPlay and Android Auto and it’s wireless to boot. The now standard 12.3-inch touchscreen infotainment system looks massive and has a much sharper resolution compared to the outgoing and outdated 8.0-inch touchscreen. The system can split the screen to show CarPlay on the left and another system page, such as audio or built-in navigation, on the right. It’s slick. 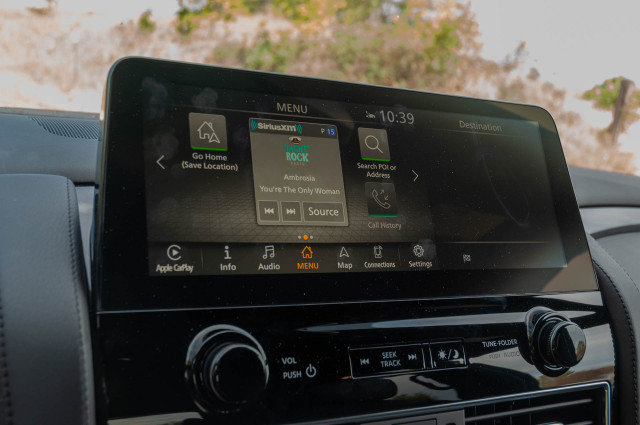 But Nissan’s infotainment interface is far from the best. The buttons and interface are easy enough to navigate, but the homescreen design is useless if not using the system’s built-in navigation system; the widgets are limited to navigation functions and the weather or a clock. Just plan on using CarPlay or Android Auto to wipe Nissan’s homepage experience away. 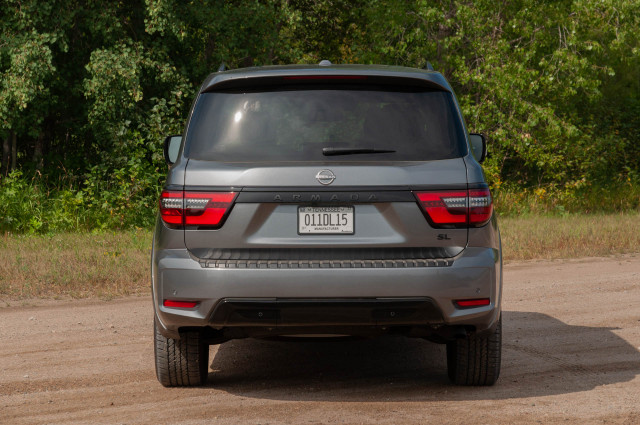 The 2021 Armada isn’t new. It received a simple refresh to the front fascia, taillights, and slightly tweaked wheel designs that all gives it a sharper, more angular look. The headlight design now mimics that of the three-row Pathfinder and smaller Rogue with C-shaped LED daytime running lights. It’s still not pretty, but it looks more distinctive than before. 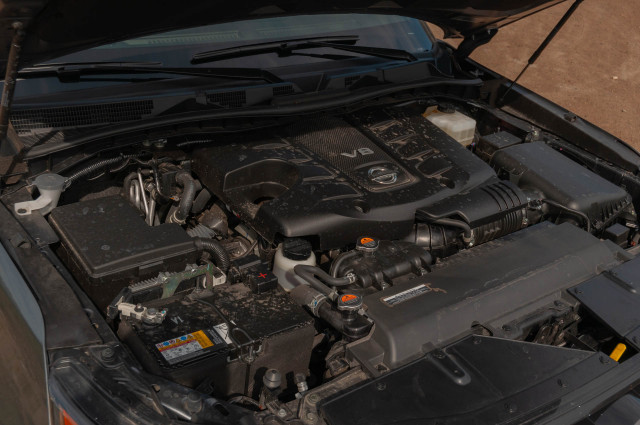 While the Ford Expedition is powered by a twin-turbocharged V-6, the Armada soldiers on with a tried-and-true 5.6-liter V-8 under its hood. Making 400 hp and 413 lb-ft of torque, it’s mated with a 7-speed automatic transmission with rear-wheel drive or available four-wheel drive. This V-8 is one of my favorite engines on the market because of a predictable torque curve and it’s smooth as silk even upon cold start with nearly zero clatter. 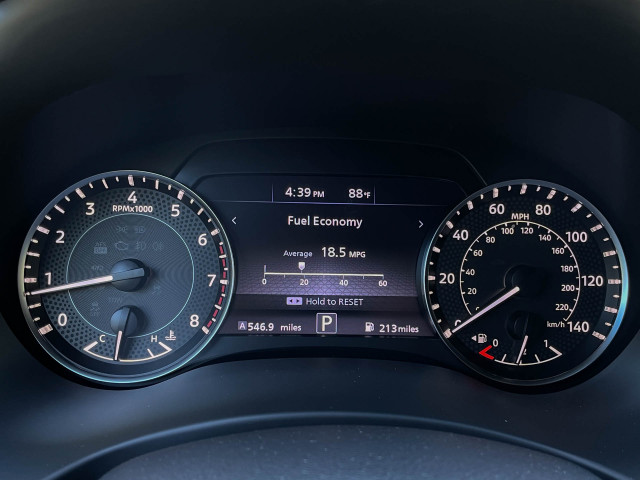 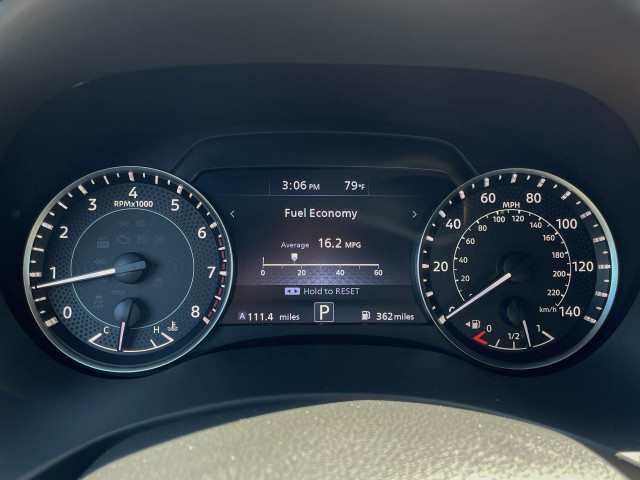 But sometimes the things we love hurt us, and the Armada’s V-8 definitely has the ability to make one tear up at the gas station. With EPA ratings of 14 mpg city, 19 highway, and 16 combined, the Armada isn’t efficient. Opting for four-wheel drive drops each of those ratings by 1 mpg. In 111 miles of mixed suburban driving I saw an average of 16.2 mpg according to the trip computer, and 18.5 mpg over the course of 546 highway miles. My $60,525 Armada SL was equipped with the $650 Captain’s Chair Package, which swapped the second-row bench seat for Captain’s chairs and a center console with an armrest and storage cubby. Seating capacity drops from 8 passengers to 7, but captain’s chairs give the second-row riders similar seats as what’s found up front. Those four thrones are wide, supportive, and very comfortable with a surprising amount of shoulder support. The second-row seat backs also recline for further comfort on road trips. 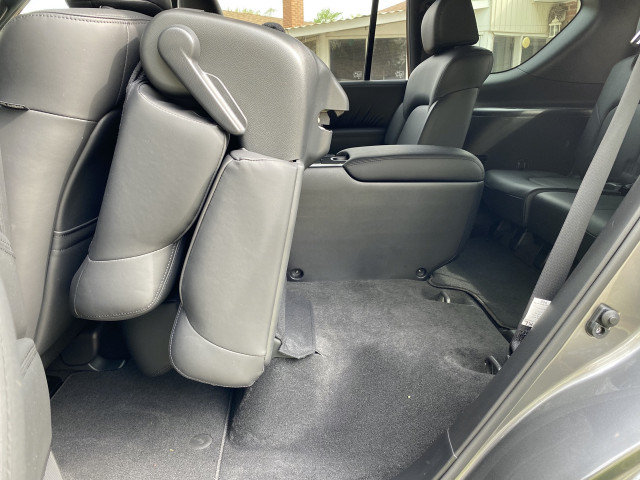 The third row has three seat belts, and while I can fit back there at 5-foot-10, it’s not comfortable. The seat bottom is low and flat, leaving one wishing they had some thigh support while they complain about the lack of leg and headroom. It exists for short, uncomfortable trips, but it’s not in the same league, or even galaxy, as the third row in a Chevrolet Tahoe or GMC Yukon. When the third row is folded down it doesn’t fold completely flat. The way its seat bottoms are mounted to the floor result in the load floor sloping to the rear of the cargo area.

Whether it’s the base Armada that costs just under $50,000 or the loaded Platinum model that tops $66,000, Nissan’s baked in some value with this SUV that cost thousands less than a comparably equipped Tahoe. It’s a comfortable, capable cruiser with a modern infotainment system, but it still chugs gas and isn’t ideal for more than four or five passengers.

Dealerware Selected as Preferred Partner of the Ford and…