My week with the redesigned 2021 Kia Sorento Hybrid was a mixed-use experience that might be familiar to many families. The three-row crossover SUV hauled my two kids and their gear to an array of practices and events, and it carried us away on a long weekend road trip.

Several positives stood out, but none more than the overall value and the 37 mpg combined fuel economy. It easily beats the hybrid SUV competition, yet it can only be had with front-wheel drive and it could be overshadowed in Kia’s own lineup by the larger, sexier 2021 Kia Telluride, and the more utilitarian (and sexy in its own right) 2022 Kia Carnival minivan. All have three rows of seats, but the Sorento is the tightest.

The new metal looks good, but the interior might be trying too hard, just like the powertrain in higher gears. There’s nothing bad about any of this, but nothing really remarkable aside from the value and efficiency. That’s one reason the model earned a pretty good TCC Rating of 6.8 out of 10.

The Sorento Hybrid is a pretty good choice if you’re looking for a three-row hybrid SUV that you don’t have to plug in. Normally in these reviews, we list the hits and the misses. But the Sorento doesn’t always miss so much as fail to impress, so I’m instituting a new category: meh.

The 2021 Kia Sorento Hybrid has an EPA rating of 39 mpg city, 35 highway, and 37 combined. That’s the most efficient three-row SUV without a plug. It edges the Toyota Highlander Hybrid’s 36/35/36 mpg rating and embarrasses the Ford Explorer Hybrid’s 27 mpg combined rating. The Sorento’s rating matches it’s efficiency in the real road conditions. On single lane country roads stringing together one-stop towns like telephone wires, the Sorento flexed its efficiency, hitting 37 mpg over 90 miles at an average speed of about 55 mph. On the highway at higher speeds, even with the electric motor taking over on occasion, it dipped to 33 mpg. I didn’t test it enough around town, where it’s at its best. 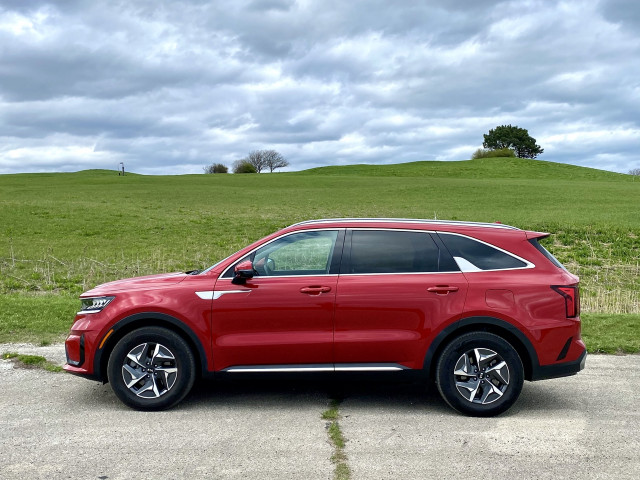 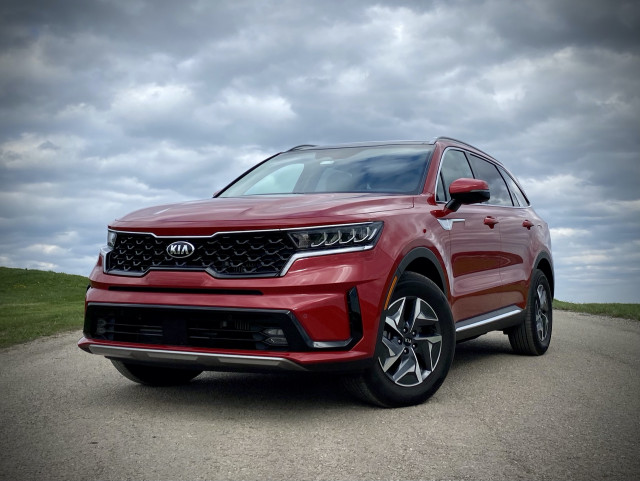 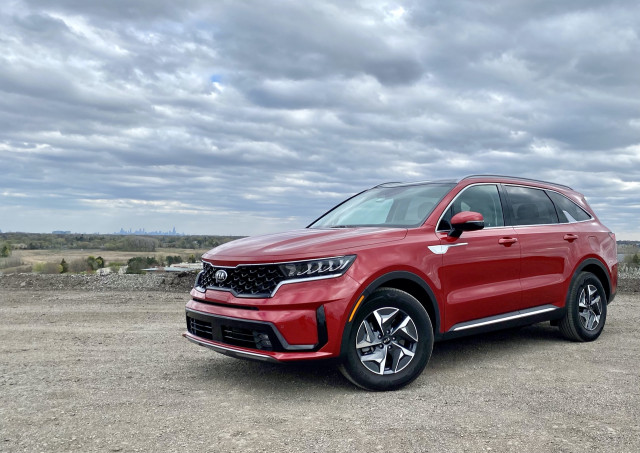 The Hybrid pairs a 1.6-liter turbo-4 with a 44-kw electric motor powered by a 1.5-kwh battery pack. Total system output is 227 hp and 258 lb-ft of torque, which is neither excessive nor lacking. It can run on electric power but only under light throttle and at low speeds or cruising speeds. It’s not quick in any mode, but there is an electric boost of torque off the line until the turbo spools up and the 6-speed automatic transmission digs in. Power delivery feels natural enough in the lower gears, but in higher gears and more than moderate throttle it seems to lose its way between the motor, the engine, and what the driver wants. That can lead to gaps in power. Paddle shifters help, and should be used before passing moves on one-lane highways. A downside for many shoppers in northern climates is the Sorento Hybrid only comes in front-wheel drive. The forthcoming plug-in hybrid has all-wheel drive.

The cabin can be loud, and not necessarily from the powertrain. I had to turn the audio system higher than I wanted  on a few early mornings to overcome wind and road noise, and on the return of my road trip, with dawn breaking and the caffeine not quite waking, I turned the audio off and settled for the hum of the road.

The 2021 Kia Sorento Hybrid S base model costs less than $35,000. My tester was the top Hybrid EX trim for about $38,000 with all the driver-assist features, second-row captain’s chairs, heated front seats with synthetic leather, at least six USB ports including one in the side of each front seat for second-row users, an 8.0-inch touchscreen with smartphone compatibility, a panoramic sunroof, a power liftgate, and a peerless 5-year/60,000-mile warranty. The 2021 Toyota Highlander Hybrid starts just under $40,000 without synthetic leather seats, captain’s chairs, or wireless smartphone charging. The 2021 Ford Explorer Hybrid is limited to Limited and Platinum trims, starting above $50,000. 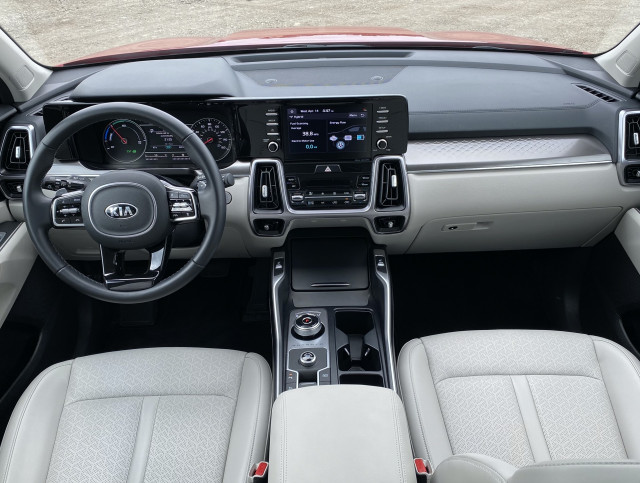 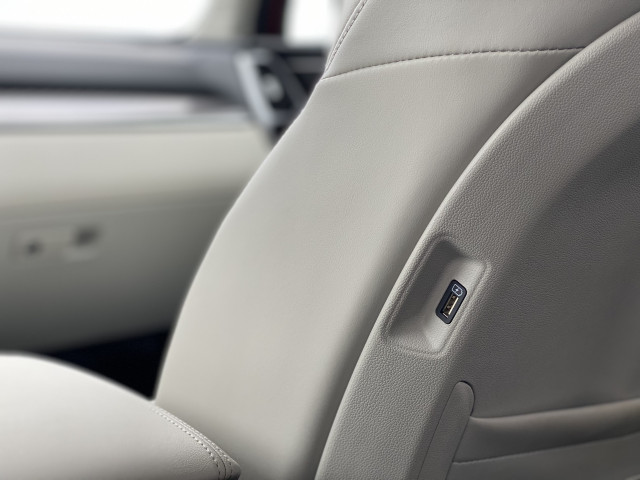 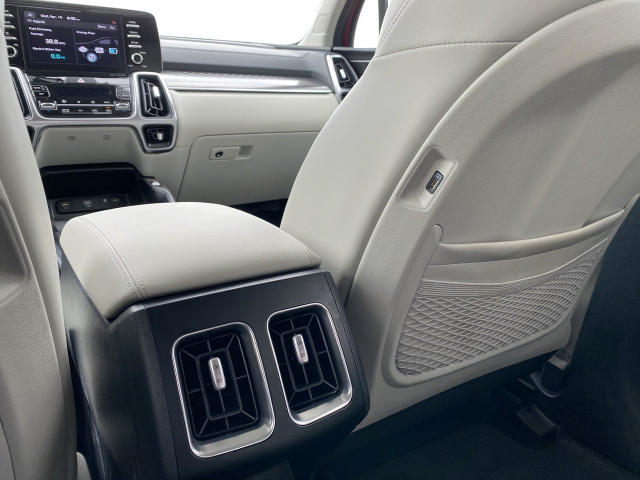 The redesigned Sorento has an upper face like the Kia Seltos small crossover but a rear end from the Telluride large SUV, and an odd dog tooth window trim element on each side. The creased hood and panels, along with a roof spoiler and other SUV elements, make it more distinct than the plain outgoing model. On the inside, things get even more…daring. The vents take the shape of a game controller or aStar Wars Imperial TIE Fighter. Diamond metallic plates trim the dash and doors in a raised, almost quilted pattern that attracts finger tips. There’s a lot going on without a clear theme, but the symmetry works well, as do the abundant storage spaces.

Kia offers three vehicles with a third row, including the larger Telluride and the roomier Carnival (nee Sedona) minivan. If you’re here, you’re probably not considering the minivan, even though it’s the best use of space for families. Those third rows feel like lounges compared to the cramped back row in the Sorento. Adults could rest their chins on their knees, but two grade schoolers could fit back there fine.

Overall, the 2021 Kia Sorento Hybrid is a great value for families who don’t want a minivan and don’t need that third row all the time. It won’t excite much in any way, but practicality is all about long-term enjoyment.

The Calm After the Storm