What is that thing? That’s the biggest question the general public has with Kia’s latest mid-size sedan.

Formerly known as the Kia Optima, the 2021 Kia K5 was redesigned with a fast roofline and trendy LED lighting that helps it stand out among other mid-size sedans.

The 2021 Kia K5 has a TCC Rating of 7.4 out of 10 thanks to its dramatic looks, great tech, and punchy turbo engines. But its name leaves more questions than answers, the trendy LED lighting might not age well, and it’s loud in the wrong ways.

I spent a week with the 2021 Kia K5 EX picking up groceries, braving sub-zero temperatures, and hauling the kids to school to learn where the K5 hits and misses. 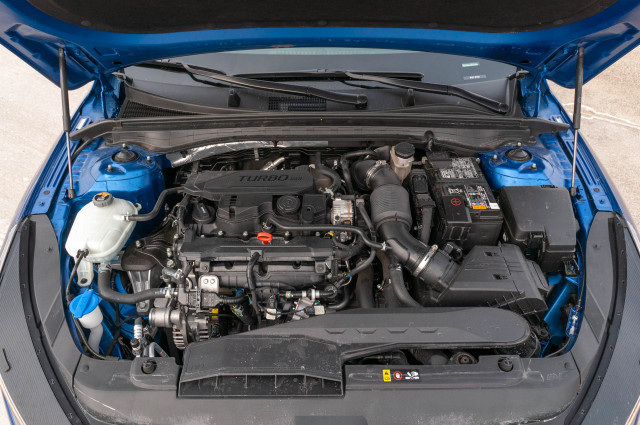 My nicely equipped $32,355 K5 EX was powered by the standard 1.6-liter turbo-4 with 180 hp and 195 lb-ft of torque sent to the front wheels via an 8-speed automatic transmission. Within the first block behind the wheel of the K5 I was surprised at how strong the turbo-4 felt. In no way did I miss having a V-6 under the hood. The turbo kicks in early with very little lag, and the throttle tuning makes the K5 leap off the line. It’s easy to spin the tires when they are cold. The 2021 Mazda 6’s larger 2.5-liter turbo-4 wishes it felt this punchy off the line. 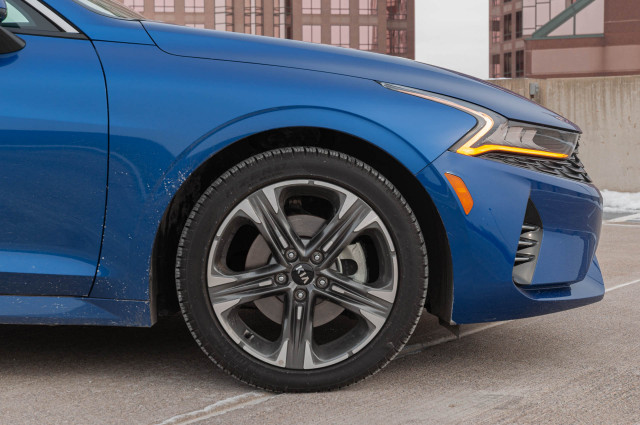 Miss: How about some progression?

The turbo-4 isn’t the only powerful piece of the powertrain equation. My K5 EX tester’s brakes were strong, but they were also quite grabby. The brake pedal and engagement of the brake system isn’t progressive. It’s on or off, which makes it difficult to be smooth while engaging the brakes rolling up to a stop sign or stop light. 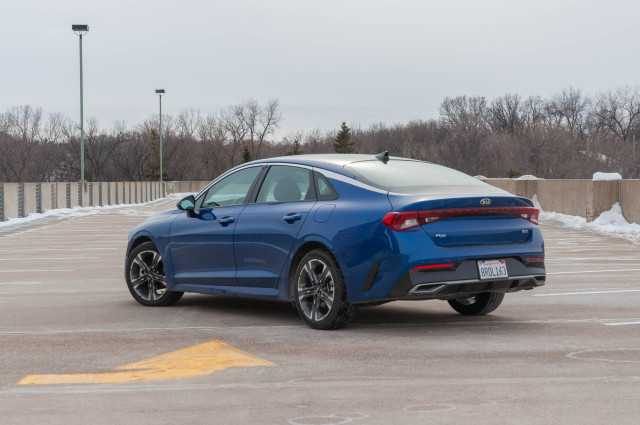 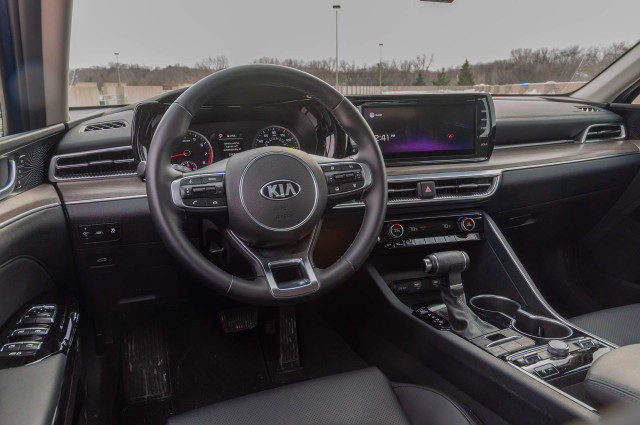 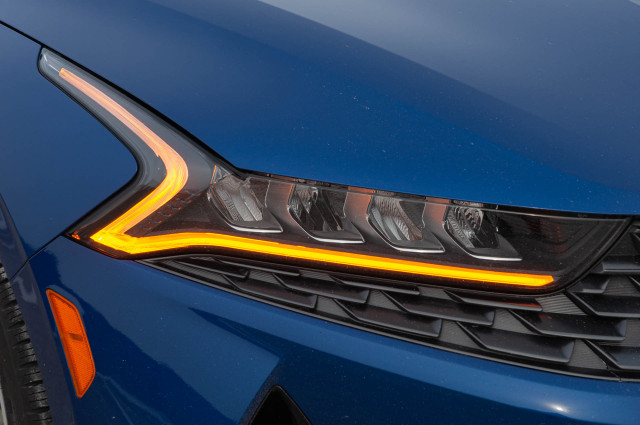 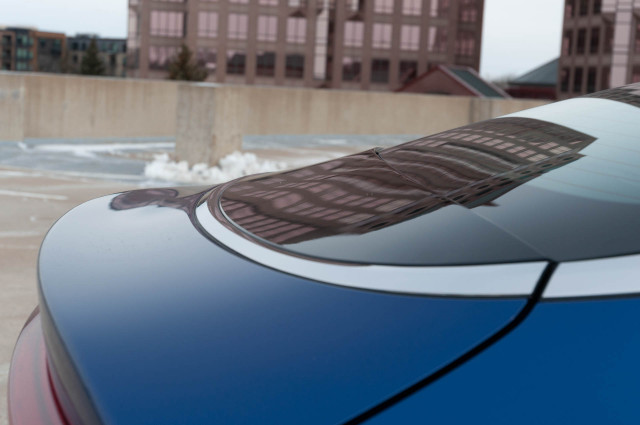 There’s no denying that the K5 captures your attention. From the zigzag LED lighting up front (that might not age well) and full-width LED taillight to the fast roofline and short rear deck the K5 grabs every design mark from the trendy bin. The K5’s cousin, the 2021 Hyundai Sonata, pulls off similar proportions with a fast roofline, but does so in a less sporty, more luxurious way. The Honda Accord might have done it first, but the K5 and Sonata do it better. Inside, K5s are slathered with glossy black plastic just waiting for dust and fingerprints, but the glints of metallic trim brighten things up and make it feel slightly more expensive than it is. 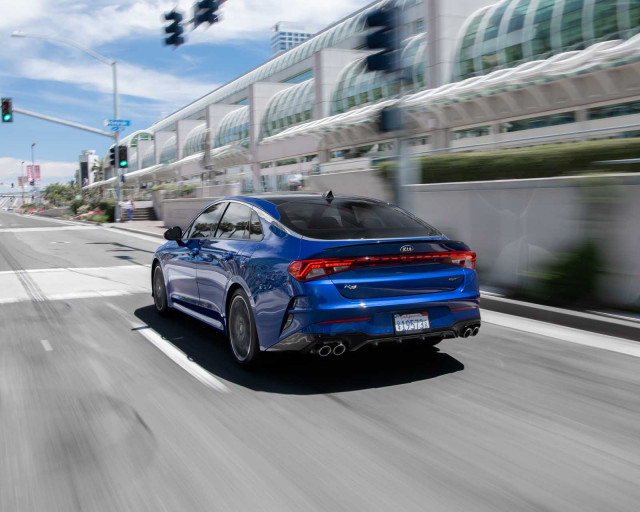 Miss: Can you speak up?

The K5 is loud in all the wrong ways. No, there isn’t some large engine or whiney supercharger you hear, it’s just lots of wind and suspension noise. In the cold of Minnesota I could hear every single bit of movement the suspension endured over the broken pavement of my neighborhood. On the highway I had to constantly ask my 4-year-old son to speak up from the rear seat to hear him over the wind noise from the A-pillars and side mirrors. 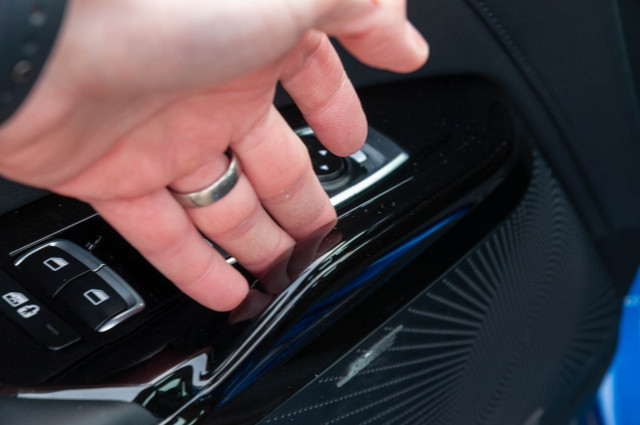 When it comes to mass-market family sedans the smart little details often get overlooked, but the K5 hits high on this note. The front doors feature a slick little raised piece of trim by the window switches that provides another area for you to easily grab the door to close it while seated. The fast roofline might lead one to think the K5 skimps on rear headroom, but the headliner is scalloped above the rear seat passengers’ heads to increase headroom. The metallic trim on the air vents features ribbing on the bottom for some visual pizzaz. All the little things add up to nice touches one doesn’t find in a Nissan Altima. 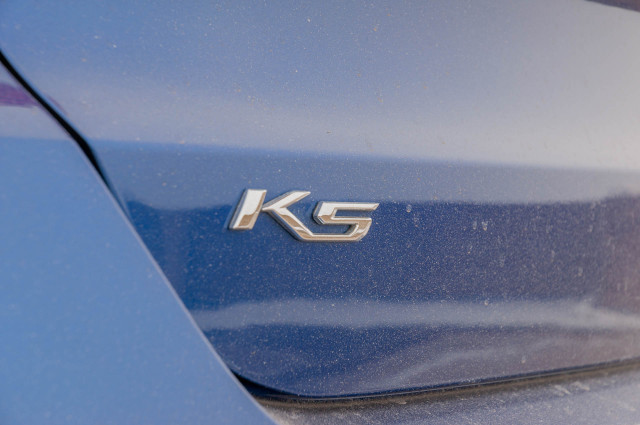 Lincoln got the message. Heck, even Cadillac got the message. But Kia? Apparently it missed the memo that alphanumeric names are difficult to remember. People know what a Kia Optima is. Nobody knows what a Kia K5 is. Now the automaker’s starting from scratch with name recognition. While the Optima’s been called the K5 outside the U.S. market for some time, this renaming move on the K5 is a mistake. The Sorento kept its name, the Telluride’s a hit, and the K5 should be named Optima.

After a week with the 2021 Kia K5 it’s clear this mid-size family sedan has the right design, powertrain, and price, but it could use a little more time in the oven to receive a slightly more refined ride with less noise.

These Cars Scream, “I’m Overcompensating For Something”