They asked the same question, at the hockey rink, in the school drop-off, in a supermarket parking lot. “Is that the new Bronco?!? How do you like it?”

In every case, nearly a dozen times in one weekend, I said, “This is the Bronco Sport—the big Bronco comes out in a couple of months.”

They—men, women, a teen—could not have cared less. Whether by design or luck, Ford’s rollout of the Bronco Sport ahead of the bigger Bronco later this spring has captured people’s attention unlike any other compact crossover, including the much anticipated return of the 2020 Land Rover Defender.

That’s one reason why the 2021 Ford Bronco Sport earned a high 7.0 out of 10 TCC Rating when we tested it back in December. A couple months later, during a week of hopscotching frigid February snowstorms in Chicagoland, I appreciated it even more for its style and capability. The front seats could be more accommodating, and the rear seats have less leg room than its fraternal twin, the Ford Escape. But the Bronco Sport is a suburban Jeep beater. 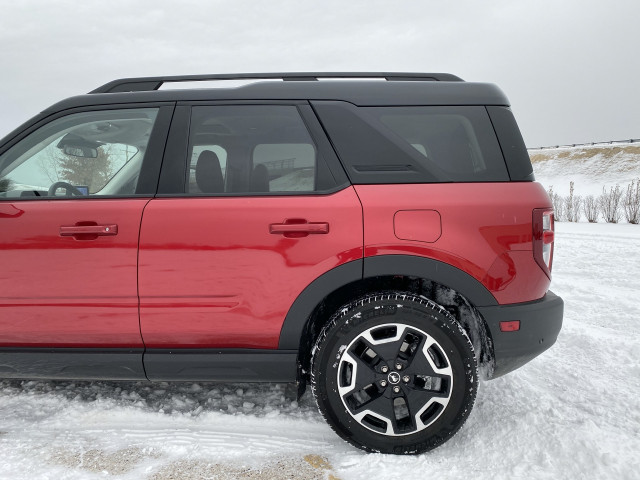 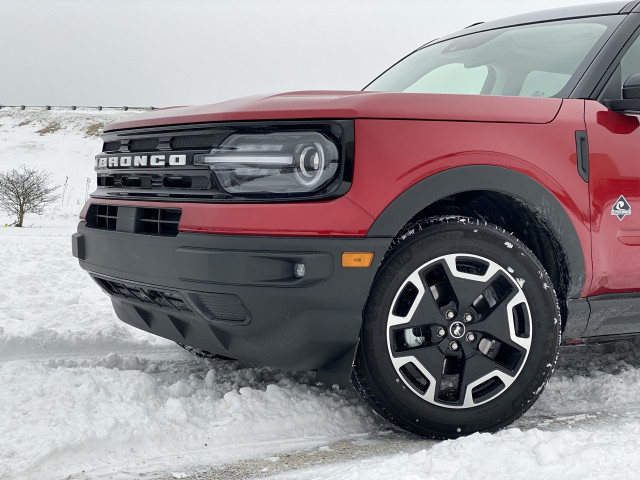 People see the boxy ends and big letters stamped on the grille and they think Bronco. Rightfully so: It says Bronco and it has the same headlights shaped like an eyelet. The hood has twin bulges that stretch like planks from the front seats off the sheer cliff of the grill; the big Bronco has ridges on either end for better orientation when off-roading. They look more alike than different. It’s a clever move by Ford, because under the skin it is much more Ford Escape than ballyhooed Bronco.

Chunky black cladding runs from bumper to bumper over the wheel arches, and the boxed rear end with its split-glass liftgate and integrated roof rails puts utility in this Sport. With the exception of the Defender, Bronco, and the Wrangler, it looks more like a traditional SUV than anything else on the road. Even though it rides softer and quieter than a Wrangler, it’s not as muted as the Escape. 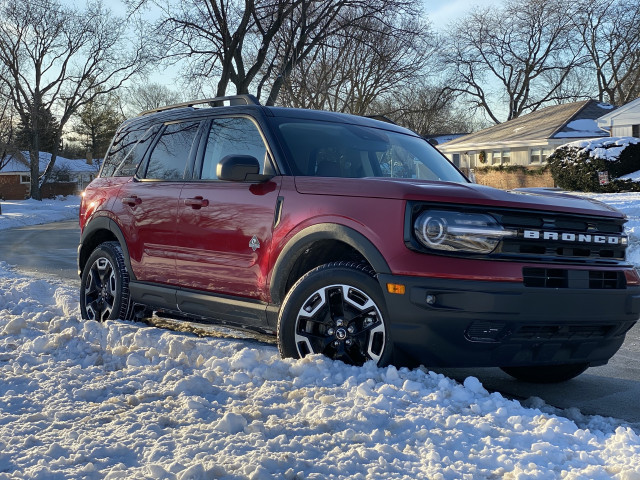 In December, I tested the top Badlands model in an old rock quarry turned sandy RV park, and had a blast. It has a 2.0-liter turbo-4 that makes 245 hp and 275 lb-ft of torque, and has an all-wheel-drive system that approximates four-wheel drive and features off-road upgrades such as four skid plates, an off-road crawl mode, and a beefier suspension. It’s more capable than a Trailhawk-rated edition of the Jeep Compass or Cherokee.

But I also tested an Outer Banks model with a 1.5-liter turbo-3 that makes 181 hp and 190 lb-ft of torque. It handled capably in the sandy quarry, and back home months later in deep, wet snow, it proved itself in conditions more drivers are likely to face.

It has a more familiar all-wheel-drive system that can send up to 50% of the torque to the rear axle if wheel slip is detected up front, or the driver can switch to Slippery or Sand modes (two of five options on the G.O.A.T. selector, “Goes Over Any Terrain”) to spread the torque between the axles.

Unlike the twin-clutch setup on the Badlands model, the base model uses an open rear differential where the braking system redirects torque away from the slipping wheel to the one with more grip. In deep snow, with a layer of ice underneath, I had to rock the Bronco Sport back and forth to gain a foothold. Switching it to Sand mode, I was able to emerge from the snowbank in a right-left turn of the steering wheel and a bit of gas. There should be no worry negotiating unplowed alleys or busting over snow walls that once held parked cars.

The terrain modes and all-wheel-drive system combine with the suspension’s stiffer damping for robust performance in less than ideal conditions; the 17-inch wheels are offset for a wider track that’s more stable than the Ford Escape and it can get in and out of more places with more confidence.

The downside is that it rides louder than the Escape, turns with more body roll, and with an EPA-rated 25 mpg city, 28 highway, 26 combined, this boxier-looking alternative is 2 mpg less efficient than an all-wheel-drive Escape. But its practical capability, as well as the fantasy of taking it to an old quarry, is worth it. 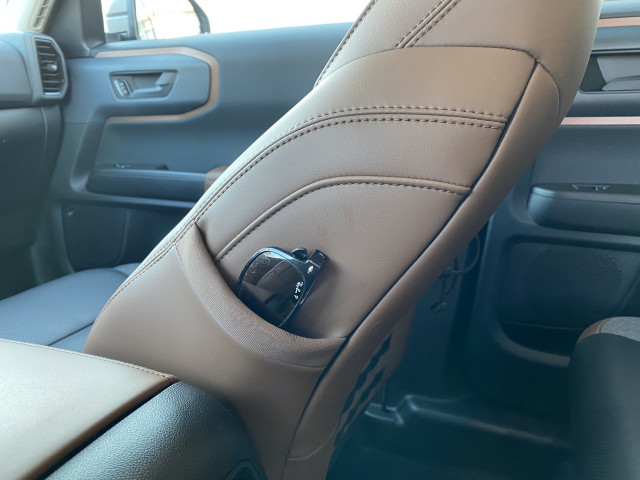 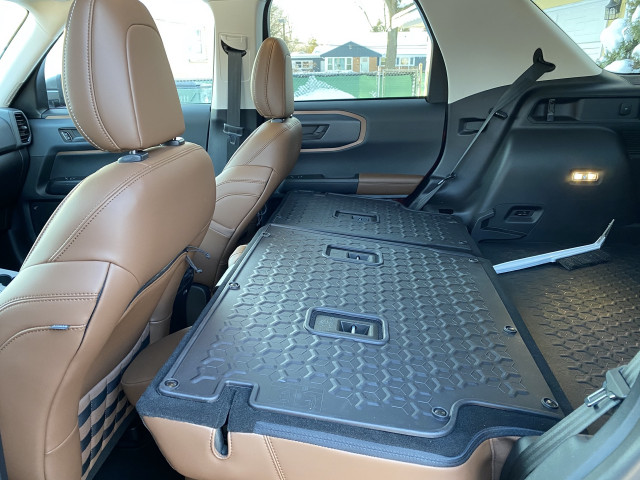 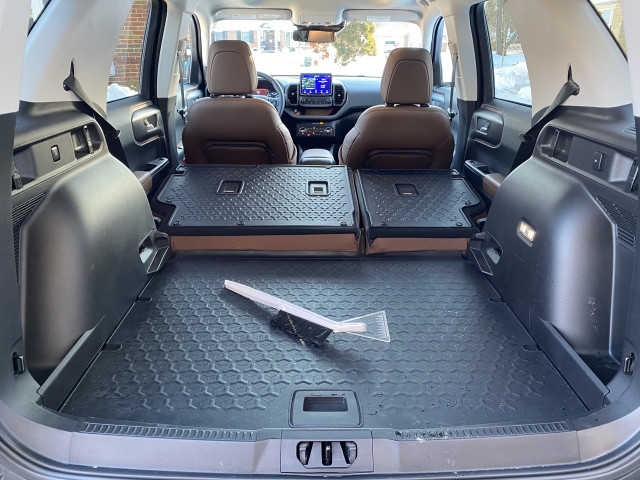 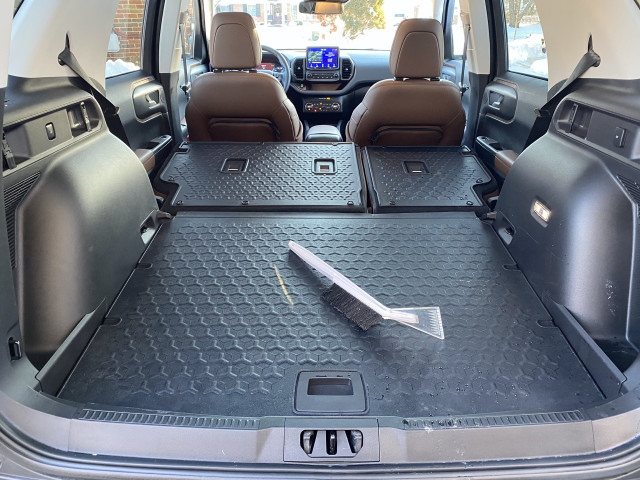 My daughter’s hockey goalie gear fit in the back of the Bronco Sport without folding down a rear seat, and I could have stacked another one to carpool. Sure, the sticks would ride shotgun or slung over the rear, but the Bronco Sport has more functional space than most compact crossovers.

By the numbers, the 32.5 cubic feet of cargo space behind the rear seats is 5.0 cubic feet less than the Escape.

Why does it seem roomier? It’s all about the box. The Bronco Sport is 8.6 inches shorter, but 4.0 inches taller than the Escape. Packing things in a box is much easier than with a sloped angle. Fold the seats flat and the Bronco Sport nearly matches the 65 cubic feet of space in the Escape.

The Bronco Sport Outer Banks abounds with clever storage spaces. The cargo floor can stay flat with the 60/40-split rear seats, or it can be lowered about three inches for more vertical space. On either side, between the rear of the wheel wells and the gate, are side cubbies for a gallon of milk or a six pack or two. And there’s a bottle opener on the gate.

The front seatbacks feature zipper pockets for tablets and other valuables, while Molle straps can be slung with carabiners for other gear. Inside seat pockets can hold sunglasses, wallets, phones, or one of those old atlas things. Up front, a recess beneath the standard 8.0-inch touchscreen stows phones or gloves or whatevs. 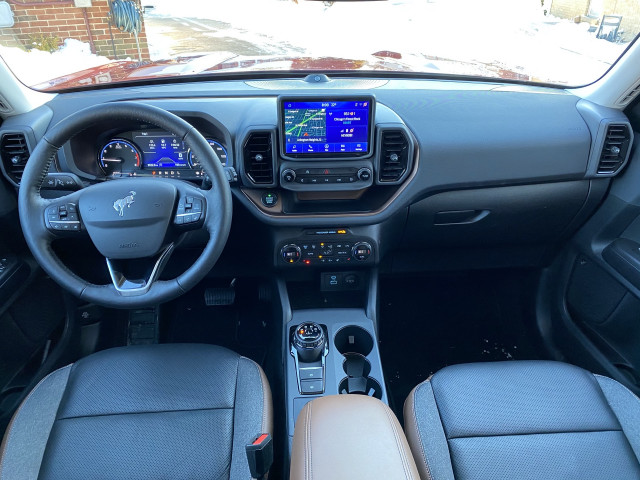 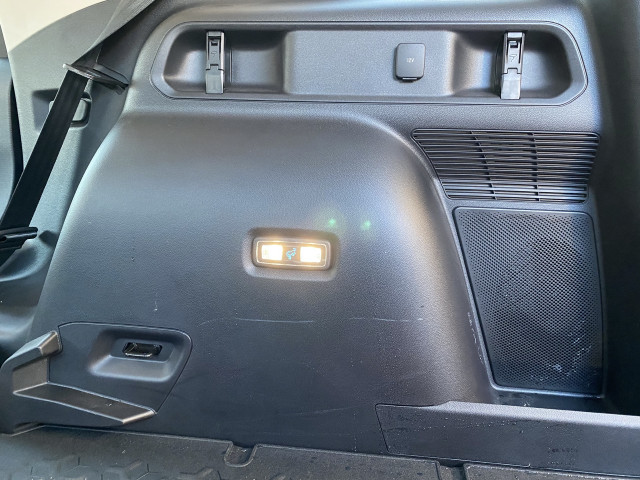 Even though it’s shod in different leather, and the beige hides remind me of my dad’s Bronco Eddie Bauer series from the 80s, the front seats are the same short-bottomed ones as in the Escape. The lack of thigh support is disappointing.

The rear seat leg room loses 4.0 inches from the Escape, due in part to a wheelbase that’s 1.6 inches shorter. It’s best for two, but four can fit. Forget the fifth.

The 2021 Ford Bronco Sport splits the difference between the Ford Escape and the Jeep Wrangler. It looks different enough and acts rugged enough to appeal to shoppers who want something like a Wrangler but have no intention of using the hardcore Wrangler’s off-road hardware. In my week around town, I enjoyed the Bronco Sport more with each drive, and not because strangers noticed it. Ford has made a winner that will outsell the Bronco and might outsell the Escape. That should worry Jeep.