The 2020 Land Rover Defender proves you can enjoy an off-road vehicle without ever venturing off-road. Such is the privilege of luxury, to do what you want even if you never do.

Land Rover relies on this luxury premise, starting from the Discovery Sport up the lineup to six-figure Range Rover models too pretty to toss in the mud. Yet the return of the Defender SUV after a 22-year hiatus in the U.S. resurrects a dedicated and relatively affordable off-road Rover to conquer all the terrain.

Unfortunately, during my week with the Defender 110 three-row SUV, the holidays and pandemic blah conspired to keep me on my suburban streets, conquering nothing but snow banks.

That may reflect how many if not most Defender owners will use the venerable off-roader. I live in a middle-class suburb with upper-class ambitions. Pristine Jeep Wrangler Rubicons occupy garage spots, with knobby off-road tires sullied only by the weekend’s landscaping project. In more affluent nearby suburbs, fortunate teens with the sweetest sixteens drive Wranglers and their parents drive Rovers.

The Defender straddles that difference in image and price. Rest assured, its off-road capability is unassailable, like that of a billy goat, according to Kirk Bell, Senior Editor of Motor Authority. That helped it earn a TCC Rating of 6.6 out of 10. Around town, the Defender and its car-based unibody structure rides smoother and quieter than a rocky Wrangler or trundling Toyota 4Runner, at a similar price. The two-door Defender 90 costs $47,450, while the Defender 110 four-door model is $51,850. That’s a deal for a vehicle this capable and this well-equipped.

But the base turbo-4 lacks the billy goat’s gruff of the turbo-6 I tested. Loaded with options and packed with features, the 2020 Defender 110 First Edition tester cost nearly $80,000. That’s no deal. Here’s where the First Edition stood out and where it went flat during a week of suburban and urban winter driving. 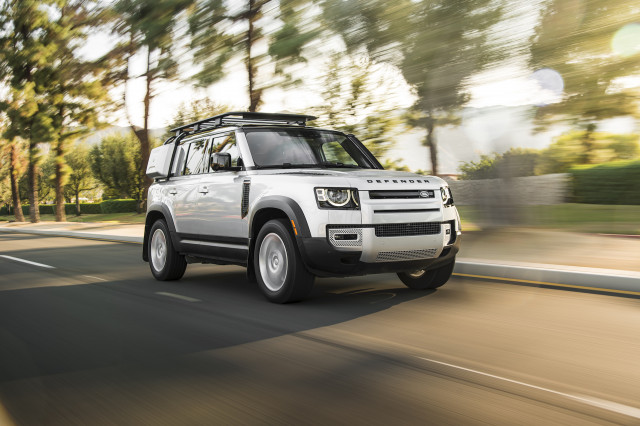 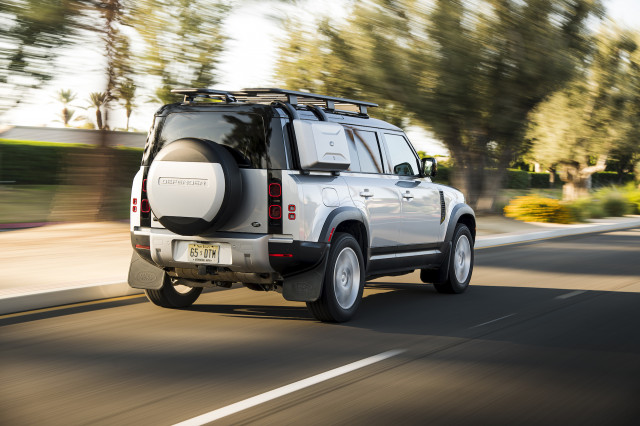 The 2020 Defender 110 First Edition looks like a toy truck come to life, shaped like the very box it came in. From the front or rear, it has a stacked stance: Fenders flare out from broad shoulders that support a square greenhouse narrower than the body. Cladding over the wheel arches and rocker panels match the blacked out roof. The front is not its best angle; the pixelated lower grille looks like a heat plate from a…grill. In back, the spare tire mounts to a rear door hinged on the passenger side to swing out to the curb for safety, though it can block access in urban parallel parking settings. 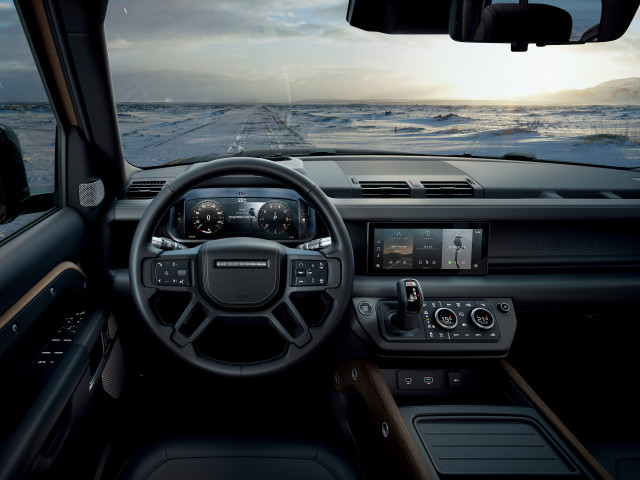 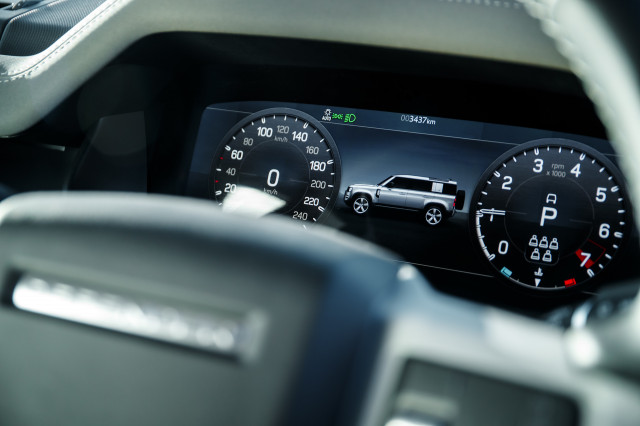 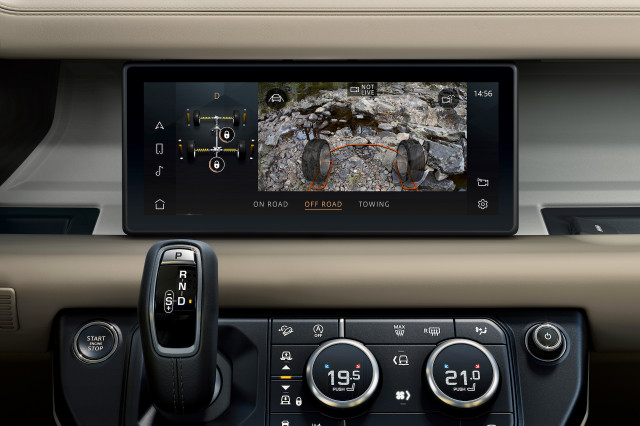 The Defender comes well-equipped with 18-inch steel wheels, LED headlights, rear fog lights, rubber flooring, 8-way power adjustable front seats, wireless charging, and a 10.0-inch touchscreen with smartphone compatibility. The wide screen with small menu buttons is fixed over a simple climate control interface with physical temperature dials that double as seat warmer buttons. I love this set up so much more than twin screen anything. The clean, streamlined display is a nice touch that matches the utilitarian nature of the Defender. But the steering wheel controls require too long of a press to change audio stations. Such nitpicking of basic controls pales in comparison to all the latent and potential tech, including over-the-air updates and an excellent surround-view camera system that projects what’s around the Defender at ground level. 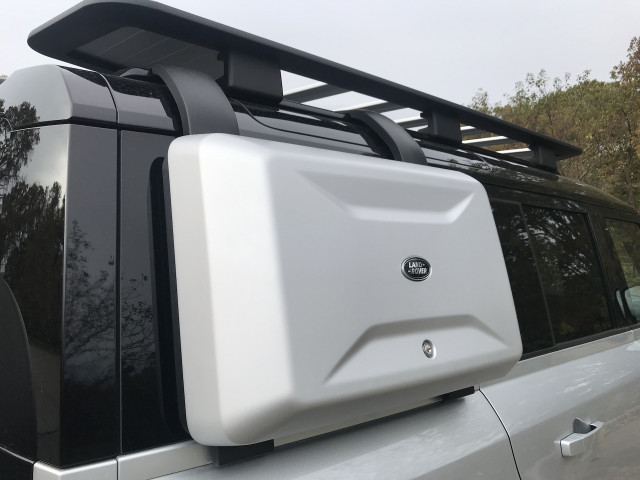 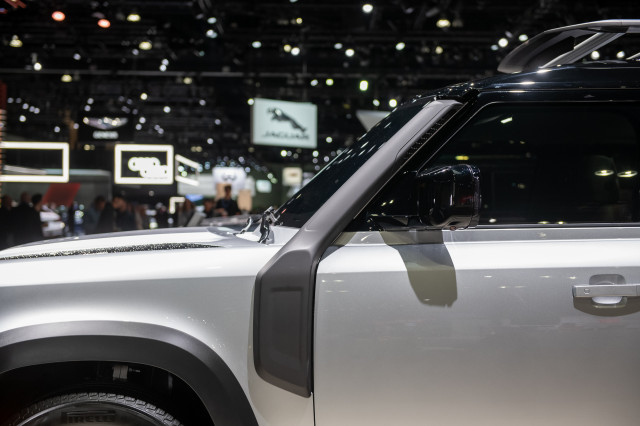 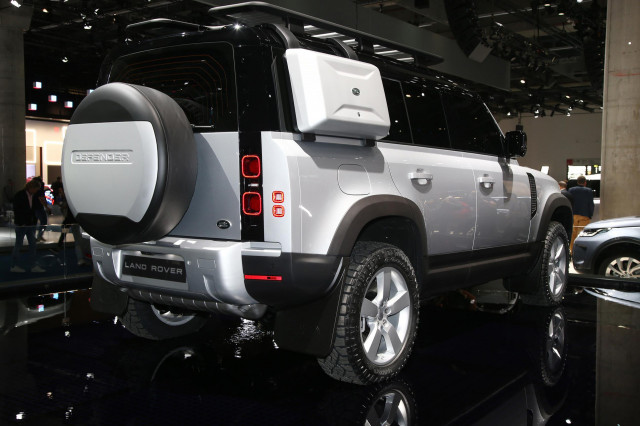 The tester came with the $4,800 Explorer Pack, that included the covered spare. Spare me. The over the top accoutrements include a steel saddlebag over the passenger side rear pillar, a massive roof rack like a flattened picnic table that added road noise and prohibited garage access, and a snorkel rising up the driver’s side front pillar less conspicuously than Toyota TRD Pro models. The mud flaps were cool, the decal was silly.

Cubbies, cargo shelves, door pockets, and other storage solutions evoke the clever use of space in backcountry backpacks, without all the zippers and carabiner hooks. A shelf runs the length of the dashboard, interrupted by the steering column and touchscreen. It’s perfect for transponders, phones, gloves, a ham sammich, duct tape, utility knife, a tube of tennis balls. Additionally, the center console has multiple levels of storage, cupholders, and a wireless charging shelf. It could also be swapped out for a front jump seat, so you could sit three across up front, same as in back. When not in use the novelty folds down with cup holders integrated into the back.

The Defender 110 can be equipped to seat 5+2 in the wayback for $1,200. Skip it if you can. Grade schoolers could barely fit in the third row, and when they could it cramped second-row riders. The second-row slides forward as well as reclines, and that area is better used for its 34 cubic feet of cargo room. 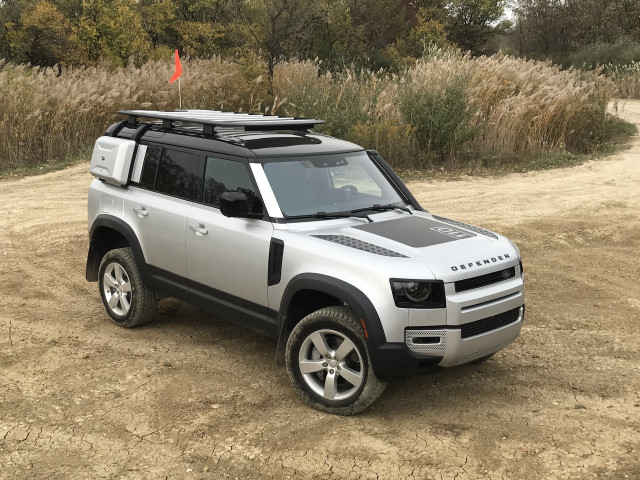 The uprated 3.0-liter turbo-6 makes 395-hp and 406 lb-ft of torque, good enough to launch the heavy upright box to 60 mph in under six seconds. It’s surprisingly quick given its dimensions, and the effortless 8-speed automatic transmission provides quick shifts. The 48-volt mild hybrid system is meant to even out the electrical load and increase efficiency, but the standard four-wheel-drive Defender has some thirsty window-sticker numbers: an EPA-rated 17 mpg city, 22 highway, 19 combined. On the upside, it can tow up to 8,200 pounds.

The tester came with adaptive dampers that soaked up road imperfections and cleared curbside snowbanks with nary a shrug. It rides like most other car-based crossovers that lack the off-road chops of the Defender. Direct but light-to-the touch steering also adds some driver’s appeal. An air suspension lowers the ride height from the rear if loading up gear or the family Rover with four legs, and raises up to 2.9 inches for off-road clearance.

The off-roading component is the crucial one for the Defender. That should be why you’re considering it. But if the style and image compel more than any other attribute, it’s a worthy consideration for its striking, clever design and potent but inefficient turbo-6.

Why Every Dealer Needs a Post-Sale Vehicle Service Contract…