Electronic Cars
On May 5, 2022
Advertisement

The Tesla Model S is leaving the factory with swiveling central touchscreens, according to multiple owner reports.

Tesla recently gave the Model S (and Model X) a significant interior update that included a steering yoke, but it hasn’t confirmed the swiveling screen. Owners have reported seeing the screen and claim it’s original equipment, however.

Advertisement
by Michael Hsu show a Model S with the screen tilted toward the driver. But customers weren’t allowed to enter the vehicle and move the screen themselves, according to Teslarati.

In a video posted on Twitter by Larry Li, a Model S is shown with a motorized screen swiveling to face the driver or front passenger. In replies to his original tweet, Li said the feature was “from [the] Tesla factory” and that the Model S shown in the video was delivered April 29, The Verge

The Model S was always at the leading edge in screen tech, although failing touchscreens on the Model S and X led to a large-scale recall request from the United States government. That one couldn’t be fixed with an over-the-air update. This applied to cars with older versions of the portrait-oriented screen that was swapped for a horizontally-oriented screen as part of the recent interior refresh.

Tesla has also lost its monopoly on elaborate screens. The Lucid Air has a retractable Pilot Panel for climate control, seat settings, and other functions that’s teamed with a 34-inch 5K main screen. And the BMW i7 was recently revealed with the massive 31.3-inch BMW Theater Screen, which descends from the roof to allow rear-seat passengers to watch movies as they’re driven along. 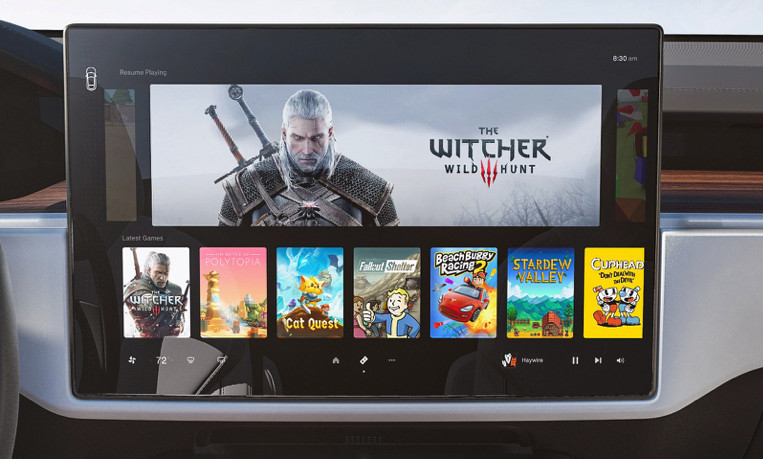 Some Chinese-market vehicles have had rotating screens for several years. And our recent observations of the usefulness of the rotary screen in the Fisker Ocean—in switching from navigation mode to entertainment mode, for instance—were met with an uproar from Tesla fans justifying why Tesla screens are fixed.

We’re interested to see your thoughts. If you think Tesla’s approach here is better, why is the tilt mechanism more useful (or less likely to break, perhaps, in looking at original complaints) than the rotary approach?

Did big EV ad spending from GM, BMW, Kia, Nissan result in a…

Mercedes wants your next Amazon delivery to arrive in an…