A small group of drivers are responsible for a disproportionately high amount of gasoline consumption in the United States, according to a new report from advocacy group Coltura.

These so-called gasoline "superusers" constitute just one in 10 U.S. drivers, but burn 32% of gasoline used in U.S. light-duty vehicles, according to the report. That's more than the bottom 60% of drivers combined, the report said.

That's due to greater mileage covered in less-efficient vehicles, according to the report. The superusers drive three times more miles than average, and are more likely to drive pickup trucks and SUVs, the report said. 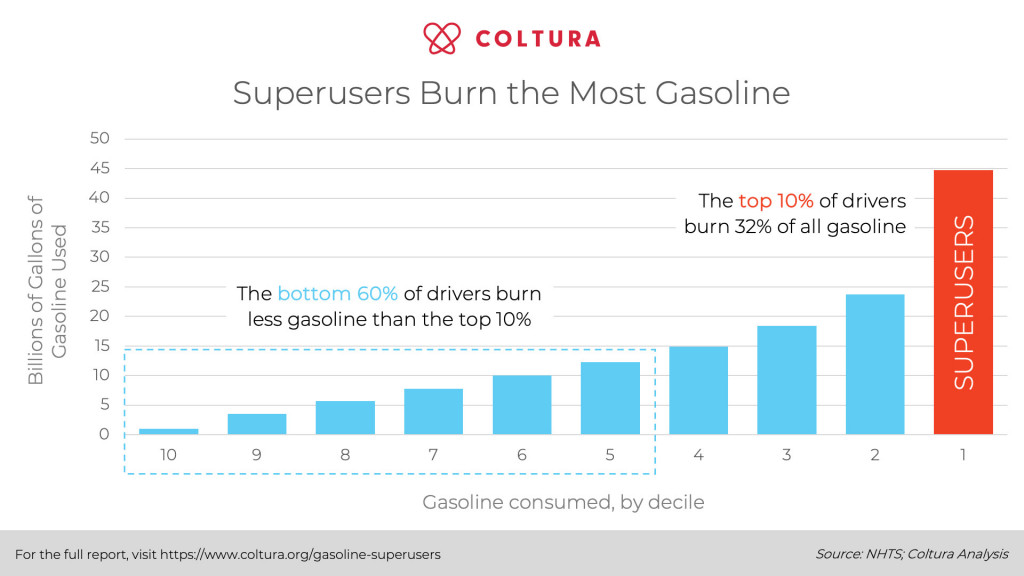 Gasoline superusers in the United States (from Coltura report)

Coltura believes these results demonstrate the need to revise EV policy to focus on the biggest gasoline users, specifically those in the Midwest. That is starting to happen, with Electrify America expanding its road-trip charging networks to better cover that region, for example.

The report also indicates the potential importance of affordable, long-range electric pickup trucks like the Ford F-150 Lightning and Chevrolet Silverado EV, as well as lower-priced, mass-market EVs meant to compete directly against popular gasoline crossovers, like the Volkswagen ID.4.

Automakers launching EVs that appeal to a broader range of new-car shoppers, rather than just early adopters, is an important factor, but it's unclear what else can be done to make the biggest gasoline users go electric.

What will a policy focused on these drivers look like? Will it involve targeted incentives? More charging infrastructure in underserved areas? Or all of the above?

Want New Product From Bugatti? Forget About it, Says CEO

Rare Rides: Be a Pioneer in a Jeep Cherokee From 1985