Just because you can doesn’t mean you will, despite what the ads on television are selling.

By our ratings, and the reality most people live in, the Honda Ridgeline is The Car Connection’s Best Pickup Truck To Buy 2021.

With a TCC Rating of 7.0 out of 10, the Ridgeline mid-size pickup truck puts everyday needs over occasional wants with a comfortable interior, plush ride, and tons of standard safety tech. No, it’s not a heavy hauler, the interior’s kind of meh, and the infotainment system is merely livable rather than impressive, but the Ridgeline gets most jobs done that don’t require heavy hauling. 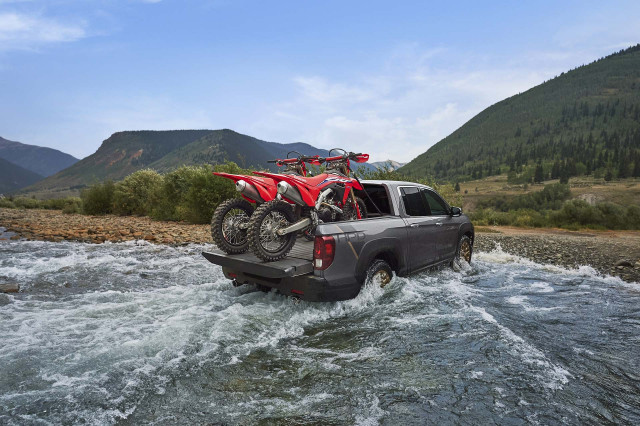 It outscores the redesigned 2021 Ford F-150’s TCC Rating of 6.6. The excellent F-150 tows up to 14,000 pounds, offers six powertrains including a hybrid, and comes with all sorts of standard safety and convenience features, all of which makes it better for work. But it gets real expensive real quick and despite being a full-size truck, the bed in crew cab configurations isn’t much larger than the Ridgeline’s.

The Ridgeline doesn’t look cool or luxurious like the Ram 1500, but it received a facelift for 2021 with a blunt upright face and chunkier grille that better distinguishes it from its platform mate, the Honda Pilot crossover SUV. 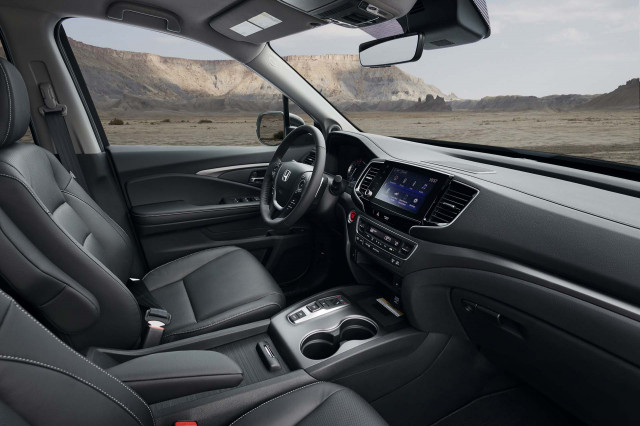 The interior cribs the Honda Pilot’s and Passport’s parts bin with a dashboard full of easy-to-use controls with hard buttons and plenty of storage bins.

There are no V-8 engines, turbodiesels, or even hybrid powertrains under the hood of the Ridgeline. Thankfully there isn’t a turbo-4 either, like there is in the Chevrolet Silverado. Every Ridgeline uses a peppy 3.5-liter V-6 with 280 horsepower and 262 pound-feet of torque. A 9-speed automatic transmission sends power to the front wheels on base models, though most Ridgelines have all-wheel drive. The V-6 powertrain accelerates smoothly and swiftly when not laden with gear and people. Ridgelines tow up to 5,000 pounds, same as the Pilot.

Fuel economy ratings haven’t been updated for 2021, but last year’s front-wheel-drive Ridgeline had an EPA-rated 19 mpg city, 26 highway, and 22 combined, while all-wheel drive dented those numbers to 19/24/21 mpg, similar to the inline-4 in the Chevy Colorado. The 2021 F-150 hybrid gets up to 25 mpg combined.

The Ridgeline seats five in comfort and it’s a lot easier to drive, park, and maneuver than the bulky Ford F-150 and Ram 1500. The packaging sets the Ridgeline apart from the mid-size competition, however. The supportive front seats are complemented by flip up rear seats and a built-in storage trunk hidden in the bed that can be hosed out, used as a cooler, or simply as water-tight storage. The lone bed size measures 60 inches long and 50 inches wide between the wheel wells, same as the Ford Ranger but smaller than the multiple sizes available on the Chevrolet Colorado and Toyota Tacoma. 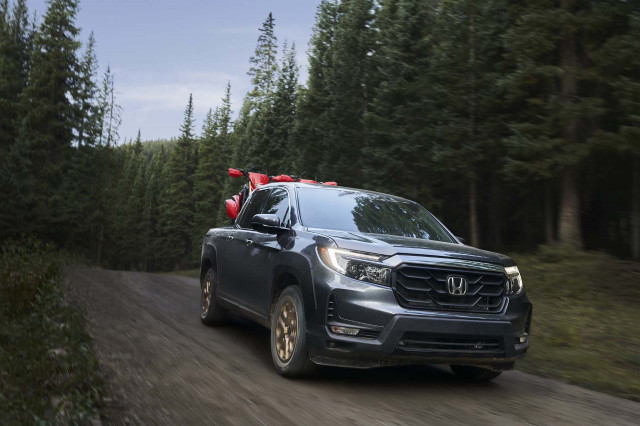 Reality is what it is. The Ford F-150 and the Ram 1500 cater to all the pickup truck wants, but the Honda Ridgeline satisfies the needs at a much better price. That makes it our Best Pickup Truck To Buy 2021.

Read all about the winners of The Car Connection's Best Car To Buy 2021 awards—and find out which vehicles took home our annual Driver’s Choice awards as well as top honors from our sister sites, Motor Authority and Green Car Reports.

Rare Rides: The International Harvester Scout, Not a Jeep…