Ford has changed the name of its hands-free driving system from Active Drive Assist to BlueCruise, the automaker announced on Wednesday. The release followed 500,000 miles of developmental testing of the Level 2 system set to roll out in the third quarter of this year in the 2021 Ford F-150 pickup truck and 2021 Ford Mustang Mach-E electric crossover.

BlueCruise is an evolution of adaptive cruise control that enables drivers to pilot the car without using their hands or feet on more than 100,000 miles of mapped divided highways in the U.S. and Canada. Unlike current systems that enable hands-free driving for 30 seconds or so before demanding the driver touch the wheel, drivers can use BlueCruise for hours as long as they’re paying attention to the road.

Using cameras, sensors, and radar, BlueCruise maintains its lane and speeds set by the driver and handles the steering, braking, and throttle, like adaptive cruise control. A blue field appears in the instrument cluster when the system detects it’s in a mapped blue zone. Ford will expand the mapped highways and send the new roads to the vehicles via over-the-air updates. Future updates include automatic lane changing and automatic speed adjustments based on curves or roundabouts, Ford said. 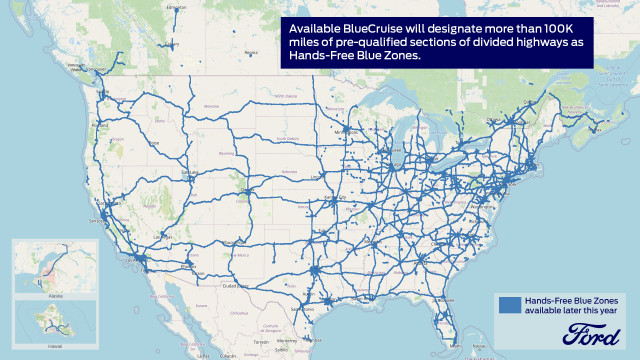 Like General Motors’ Super Cruise system and the forthcoming Lexus Teammate, BlueCruise uses a driver-facing camera in the instrument cluster to monitor the driver’s level of engagement. Gauging head position and eye gaze, even with the driver wearing sunglasses, the system will send a v isual and audible alert if the driver is nodding off or looking down to their phone or gaming on their laptop or any number of dangerous activities that have led to fatalities with mislabeled driver-assist systems.

BlueCruise is not a self-driving function. Neither is Tesla’s Autopilot, or Tesla’s “Full Self-Driving.” These systems are deemed Level 2 by the Society for Automotive Engineers. A fully self-driving car where the “driver” can take a nap is considered Level 5. With Level 2, drivers must constantly supervise vehicle operation and be ready to take over at any point. A Level 3 example is a traffic jam chauffeur that can stop and go in traffic jam situations at low speeds. 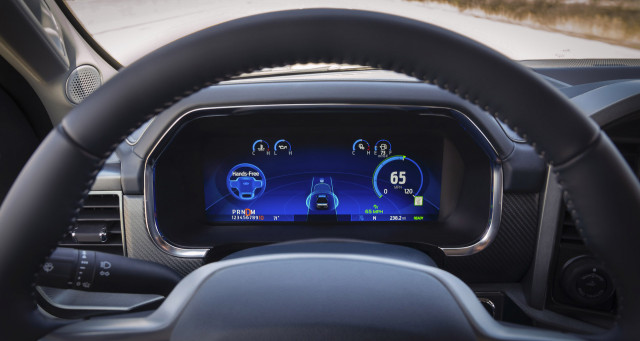 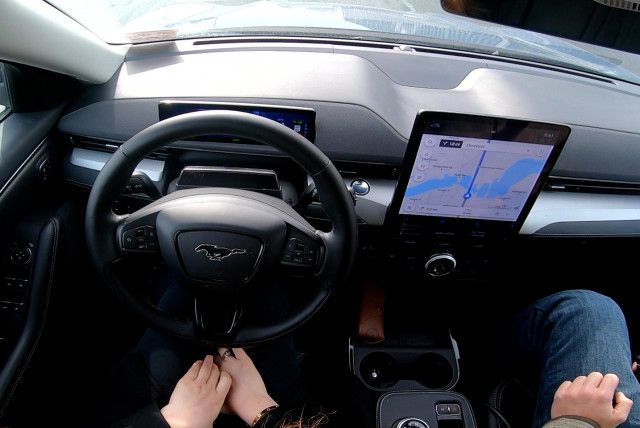 BlueCruise, Teammate, and Super Cruise are all intended for long-distance highway cruising. A beta version of Autopilot can veer into Level 3 territory on side streets but not without requiring driver intervention.

For 2021 F-150 or 2021 Mustang Mach-E shoppers who bought the Co-Pilot Active 2.0 Prep package hardware, the BlueCruise software will cost $600 via an OTA for a three-year subscription.

For new shoppers, BlueCruise on the 2021 F-150 will be standard on the Limited model, and available for the Lariat, King Ranch, and Platinum models with the Co-Pilot360 Active 2.0 package for $1,595 ($600 for the software and $995 for the hardware). It comes standard on the Mustang Mach-E CA Route 1, Premium, and First Edition models, and it will be bundled in the $3,200 Comfort and Technology package ($2,600 for the package and $600 for the software) that includes heated steering wheel and heated front seats.

Like GM’s Super Cruise that launched with the now discontinued Cadillac CT6 and is spreading to 22 models by 2023, Ford plans to roll out the technology to other vehicles in the future.

Survey Finds One in Three Americans Likely to Consider an EV…

Rivian founder and CEO RJ Scaringe is coming to TechCrunch…