We almost forgot about weekends, right?

Although camping and hiking are undergoing a resurgence, it’s an idea the Pacific Northwest never lost touch with. Look no further than the crawl of caravans of Subaru Foresters and Outbacks covered with dust or caked with mud, and loaded with outdoor gear, rolling back to Portland, Seattle, and other cities of the Pacific Northwest on Sunday nights.

Enter the 2022 Subaru Forester Wilderness, which is a model specially targeted for the outdoorsy set. Just like the STI has been Subaru’s halo model for performance—with rabid fans who tweak them with accessories and actually take them to track events—the Wilderness is a halo model for outdoor enthusiasts.

Few Forester shoppers are strangers to carabiners, Smartwool, and RidgeRests. Nearly a quarter of all Forester customers are campers, and more than a third for outdoor gear. But Subaru sees the Wilderness crowd as a bit more rugged yet. They’re the rock climbers and the backpackers of the bunch.

With 9.2 inches of ground clearance—0.5 inches more than the regular Forester—the Forester Wilderness has more ground clearance than a Grand Cherokee, a Bronco Sport, or a standard Ford Bronco, Subaru says. And the additional clearance brings increased approach, departure, and breakover angles of 23.5, 25.4, and 21.0 degrees. 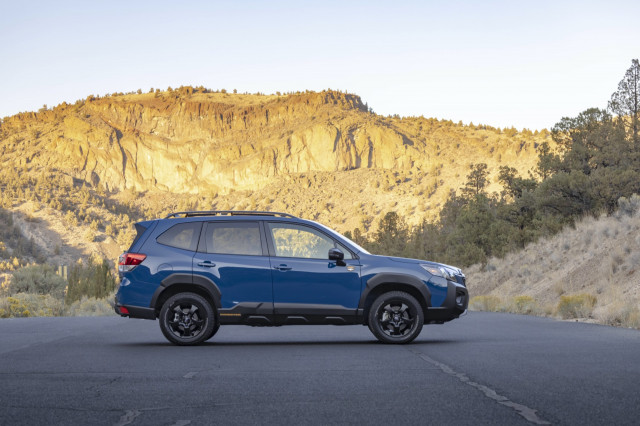 From the side the Wilderness looks brawnier, and the height is just part of it. Raised white-letter tires, matte-black alloy wheels, anodized copper tie-downs, ladder-style roof rails, blacked-out window trim, and new blacked-out front and rear fascias are all a part of the remake. But the body cladding above the wheel wells has been placed differently here; squint a bit, and it exaggerates the proportions upward to a cartoonishly lifted wagon.

One observation that extends to the current generation of the Forester is that the upper two-thirds of what you might initially perceive as the grille is truly the grille—and the upper third of the “grille” is actually part of the hood. The rear of the Wilderness is what looks the most like, well, other Foresters.

Going far past where the pavement ends

The high-desert area around Bend, Oregon, gave us a fuss-free launch point to size up more than our first impressions. I tested the latest Wilderness model on traffic-free highways and on some of the nation’s most scenic forest service roads around Cascade mountain high country. Most of the trek was blissfully off the grid and away from cell reception. And if you’re looking at your phone screen with views like this, you still haven’t found your groove. The Wilderness gets an entirely different transmission than other Foresters. It’s essentially a direct transplant from the Outback, but with lowered final gear and rear differential ratios; it has a wider ratio span of 8.1, versus 7.0 for other Foresters.

Although the engine is the same one other Foresters get, a 2.5-liter flat-4 making 182 hp and 176 lb-ft of torque, the transmission allows the tow rating to be doubled to 3,000 pounds, and it taps into more torque from the engine, both for low-end acceleration and for engine braking.

Subaru didn’t have information on acceleration times versus other Forester models, but I found two divergent impressions. The lower ratio makes it feel punchier from a standing start, but the CVT seemed in no rush to deliver a low ratio in response to sudden passing demands—prompting me at times to use the manual gate and its eight paddle-selected ratios. In all fairness, some of that pavement driving was over 3,000 feet elevation. Engine noise is nicely restrained provided the revs are under about 4,000—essentially during all but passing and the steepest mountain grades. Subaru’s latest generation of engines is smooth and remote, to the degree that longtime Subaru owners might actually miss the thrum characteristic of other Boxer engines.

Subaru retuned the springs and dampers in the Wilderness, allegedly allowing less body roll than the standard models. On the coarsely surfaced paved roads of the drive route, the setup had two roll transitions that often meant adjusting the steering wheel midcorner, but it comes into its own on a gravel road. The Forester felt confident and easy to control, without carrying much road noise into the cabin, even on washboard-like surfaces. Although the tires and suspension did a good job soaking up the most jarring impacts, my taller co-driver and I (both well above six feet tall) were left wanting more back support and longer thigh cushions. The same could be said for most affordable compact crossovers. It comes with P225/60R17 Yokohama Geolander AT G015 all-terrain tires—including a fifth full-size tire, on a matching alloy wheel—that are designed to be the best compromise between the daily commute and trail driving, without having to swap tires all the time. Subaru says that they have improved puncture resistance and better performance on mud, rocks, and gravel.

The CVT’s lower startup ratio and the grippy tires are put to good use with an expanded version of Subaru’s X Mode, which now makes brake engagement more immediate in downhill descents. As before, you turn it on at 12 mph or less with a knob on the center console; hit 25 mph and as before the system turns off, but it now reactivates when you drop back below 22 mph.

As before, X Mode is what you want for low-speed off-roading over loose dirt, mud, or snow. It changes the default distribution of the all-wheel drive system, allows a bit more wheel slip in some situations, and activates hill descent control. It enabled us to easily navigate up and down a very steep peak sculpted out of gravel.

The revisions to X Mode were made with the serious-outdoorsy use case in mind, according to Forester car line manager Michael Redic. In the past you’d use X Mode if you were stuck, he explained, but it’s now meant as more of a mode you might keep it in for the journey.

Pets, kids, and camping on the roof

Subaru has upped its roof-rail game, now supporting loads up to 220 pounds dynamic and 800 pounds static—enough to mount most if not all rooftop folding tents, with plenty of allowance for sleeping two or three. With pets and kids in mind, the Wilderness also gets washable rear seatbacks and an LED light for the cargo bay—although you won’t find any of the 120-volt AC outlets now found on a number of rival models. The Forester’s boxiness remains an asset; there’s a versatile 28.9 cubic feet of cargo with the rear seats up and 74.2 feet with them flipped down—allowing nearly 70 inches of continuous load length.

Both the gloss-black wheels and black body cladding looked great with the coat of caked-on road dust and grit that the Forester earned during the day, although we question how those pieces are going to look after the scuffs and abrasions that are inevitable in this kind of use—and seem to blend right in with the formerly used soft gray trim.

The Wilderness is one of six different Forester trims for 2022—including base, Premium, Sport, Limited, and Touring models. At $33,945, including $1,125 destination, the Wilderness isn’t the most expensive—that would be the $36,420 Touring—but its feature set keeps with the kit that active types will want. That means water-resistant cloth upholstery, heated front seats and mirrors, a heated windshield wiper de-icer, a 180-degree front-view monitor (useful in off-roading), and all the hardware upgrades.

A 6.5-inch touchscreen system is included and offers Apple CarPlay and Android Auto compatibility, plus satellite radio and a CD player. All models now include EyeSight 4, which uses a field of view two times wider than before and brings other technical improvements, plus a new automatic emergency steering feature. 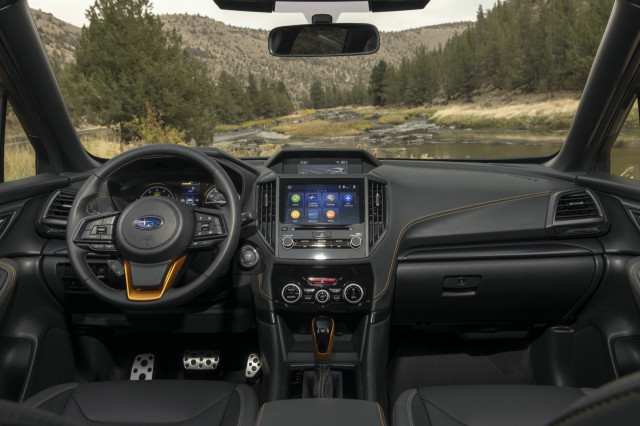 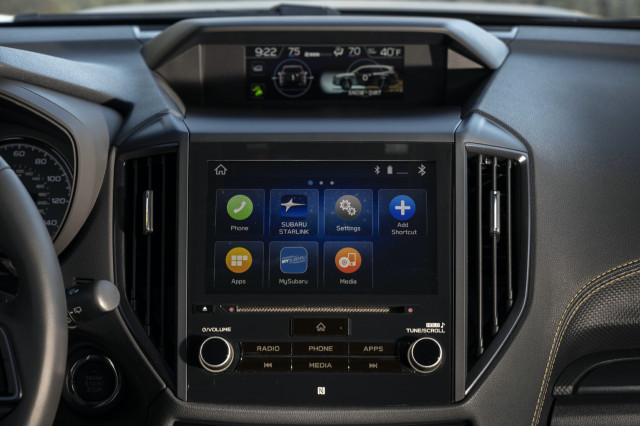 My $35,765 Wilderness tester included the only factory option, a $1,820 package that upgrades to an 8.0-inch system with navigation and premium audio, plus a power tailgate. Subaru is also offering a dealer-installed skid plate package for the Wilderness at a cost of about $600 plus installation.

What does the Wilderness compare to?

Nothing else quite compares to the Forester Wilderness, except for the Subaru Outback Wilderness. The Jeep Cherokee Trailhawk and Ford Bronco Sport Badlands would be the closest rivals in price and features; both of them have perkier on-road performance but don’t strike the same kind of balance between on-road ride and off-road readiness.

There is a gas-mileage penalty in choosing the Wilderness; it's rated at 25 mpg city, 28 highway, 26 combined, versus 26/33/29 mpg for the other versions.

At face value, the Wilderness is essentially a trim level of the Forester. But when you size up what it enables, plus updates given to the Forester lineup as a whole, it’s more than a driveway trophy like some other rugged-looking SUVs. The point is, Forester buyers aren’t poseurs about what they do on the weekends, and this Forester sure isn’t one.

The Oddly Simple Joy of the Pandemic Drive