Automakers, like humans, are creatures of habit. If we find something that works, we tend to stick with it until it doesn’t anymore. Hyundai has done exactly that with the redesigned 2022 Tucson.

After the Elantra’s successful update in 2021 that garnered the compact sedan a TCC Best Car to Buy nomination, the Tucson’s 2022 updates follow a very similar progression. The Elantra added a new platform, angular styling, an available 10.3-inch touchscreen, and a hybrid model. The Tucson, due this spring, gets all of those things for 2022, but thankfully goes beyond that with a few changes of its own, including a growth spurt that pays big dividends in the cabin.

The Tucson’s new exterior styling is significantly bolder than its previously anonymous look. It has added creases in the body sides, a striking front grille, and new taillights with light bars that stretch all the way across the back of the vehicle. It’s a big shift from the outgoing Tucson’s rather anonymous look that felt dated from the start. 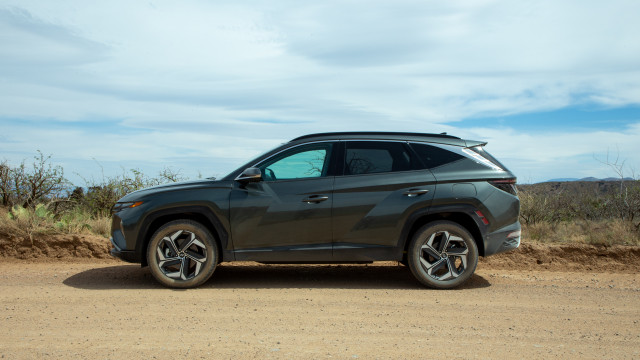 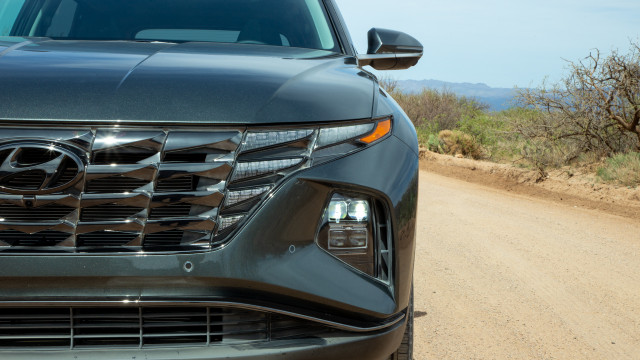 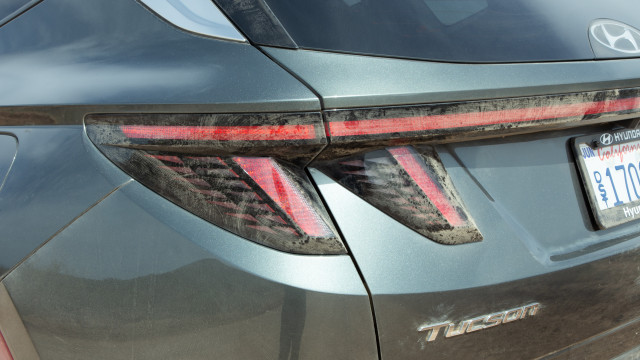 The new grille, which appears to be shared with the forthcoming Santa Cruz, incorporates daytime running lights. The outermost two columns of triangular trim pieces that appear to compose the grille are LED lights in disguise; when unlit they are indistinguishable from the rest of the grille. These lights are standard on the Limited, but optional on the SEL as a part of the Premium package.

Three different powertrains have been announced for the Tucson, but only gasoline and hybrid versions were available to test. The Tucson PHEV will be released after the other two versions. There was a significant difference in power between the two versions of the Tucson I drove. The gas version with its 2.5-liter inline-4 makes 187 hp and 178 lb-ft of torque. Jump over to the hybrid and its 1.6-liter turbo-4 has more power than the standard gas engine by itself (180 hp, 195 lb-ft). Tack on the electric motor and it jumps up to 226 hp. Both powertrains employ traditional transmissions, an 8-speed automatic for the gas and a 6-speed automatic for the hybrid. All-wheel-drive is standard for the hybrid (and the PHEV), while the gas comes with front-wheel drive by default and all-wheel-drive is a $1,400 option on all trim levels.

Those trim levels differ slightly between the Tucson’s gas and hybrid models. The gas engine is offered in SE, SEL, and Limited trims, while the hybrid comes in Blue, SEL Convenience, and Limited. The Blue and SEL Convenience are based on the SE and SEL gas models, but with an options package added on.

It’s no surprise that the Tucson Hybrid is the quicker and better to drive of the two, for several reasons. The gas engine gets bogged down when accelerating from a stop, while the hybrid uses a quick burst of electricity to get the Tucson into motion as the turbo spools up and provides a more seamless experience. Passing power is also better and more predictable from the hybrid On the winding desert roads around Tucson, the hybrid versions also stood out thanks to the e-handling system, which uses the electric motor to slightly brake the front wheels to sharpen turn-in and increase traction. After that, power is shifted to the rear for some added kick on corner exit. The Tucson doesn’t feel especially athletic overall as it has notable body roll and it tends towards understeer when pushed, with either powertrain. But the Hybrid is the better handling vehicle of the two, giving it yet another advantage over the gas model.

Fuel economy ratings check in at an EPA rated 26 mpg city, 33 highway, 29 combined for the front-wheel-drive gas models, and 24/29/26 mpg when all-wheel-drive is equipped. The Tucson Hybrid varies by trim level, with the base Blue model offering 38/38/38 mpg and the SEL Convenience/Limited slightly behind that at 37/36/37 mpg.

Building on its advantages, the hybrid is also well-priced in comparison to the gas models. It’s a modest $1,150 premium over the comparable all-wheel-drive equipped gas trims for the Blue and SEL Convenience, and on the line topping Limited it’s a $1,250 difference. That’s not hard to make up in fuel savings over time and you’ll enjoy driving the hybrid more as well.

Other driving characteristics are a mixed bag. The windshield feels gigantic and without a hood over the gauge cluster you can see all the way down to where the windshield meets the dash. All that glass combined with a high seating position provides a commanding view of the road. Less positively, the Tucson lets in more wind and tire noise than expected. It was a rather windy day out in the desert so that could have been a contributing factor, we’ll have to recheck how much of a factor this is when we get a longer stint with the Tucson later on.

Bigger inside and out

The Tucson is much bigger for this year, adding 6.1 inches of overall length, 3.4 inches of wheelbase, and 0.6 inch of height and width. At 182.3 inches long, the Tucson is now within an inch or two of the Honda CR-V and Toyota RAV4, its primary competitors. The additional roominess has been passed on to the interior, which sees a big jump in cargo capacity to 38.7 cubic feet (up from 31.0 cubic feet) with the seats up and 74.8 cubic feet with them folded down.

The backseat also grows to 41.3 inches of legroom, up 3.1 inches from last year. It’s very spacious and the seatbacks recline as well. Tilted all the way back, I found myself staring straight at the blue desert sky through the large panoramic sunroof. This is the best napping backseat of any compact SUV and easily fits adult passengers—even three of them for shorter trips—without trouble. 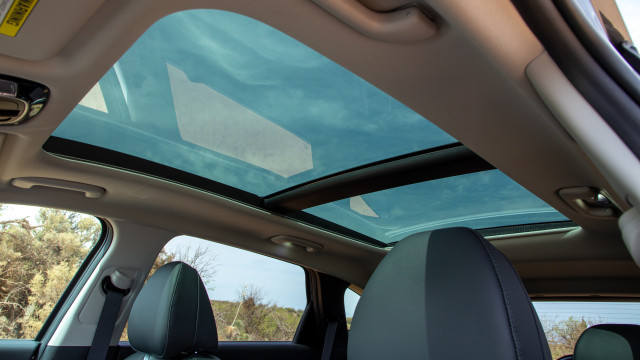 The Tucson’s technology upgrades are familiar as its screen options match those found in the Elantra. The standard 8.0-inch touchscreen in the SE and SEL models comes with wireless Apple CarPlay. Upgrading to the Limited trim brings a larger 10.3-inch touchscreen with navigation, though you lose wireless capability for CarPlay (Android Auto always requires a wire). In the Elantra, it was impossible to get a wireless charging pad and wireless CarPlay which seemed like a big oversight. That has been corrected in the Tucson; SEL models with the convenience package offer a wireless charging pad with the smaller screen, creating an available fully wirefree experience for iPhone users.

The Tucson also breaks from the Elantra on interior quality, at least in the Limited model that I tested. It suffers from fewer hard plastics on the dashboard and the center stack feels more refined, though the plethora of touch-based controls for everything from climate to volume aren’t as easy to use as physical knobs and buttons. The seating surfaces are leather on the Limited and SEL with Premium package, the rest of the trims get cloth seats.

While all 2022 Hyundai Tucsons are class-competitive, the hybrid is the more compelling choice. It’s not only the more efficient but also the more fun vehicle, at least until the PHEV arrives later this summer.

Hyundai provided lodging and meals for The Car Connection to bring you this firsthand drive report.

Every 2021 Mid-Size SUV Ranked from Best to Worst