Everything we know about the Tesla Robotaxi

Future Vehicles
On May 5, 2022
Advertisement

We have been hearing about Tesla’s Robotaxi concept for quite a few years, but it seems like we’re getting close to it finally becoming a reality.

Here is everything we know about the Robotaxi.

At the time the concept was touted as normal Teslas with full self-driving (FSD) capability.

Once Tesla achieved Full Self-Driving, they would create a “Tesla Network” taxi service that would make use of both Tesla owned vehicles and customer cars that would be hired out when not in use.

In April 2022, however, at the inauguration of Tesla’s new factory in Austin, Texas, Musk made headlines by announcing that the company would be working on a dedicated Robotaxi vehicle that would be “quite futuristic-looking”.

A Variety of Robotaxis Tesla could even create a variety of Robotaxis that help meet specific needs. For example, Tesla could offer a vehicle that is beter suited for resting, which could let you sleep on the way to your destination.

Another vehicle could be similar to a home office, offering multiple monitors and accessories that let you begin working as soon as you step inside the vehicle.

Features such as these could bring huge quality of life improvements for some; giving some people an hour or two back in your day.

The variety of Robotaxis doesn’t need to end there. There could be other vehicles that are made specifically for movie watching and entertainment or others that allow you to relax and converse with friends, much like you’d expect in a limosine.

At a time when several companies have announced dedicated robotaxi plans, most notably Zoox, Cruise, and Waymo, Tesla’s plan seem to be accelerating in order to compete with these options.

Additional details on Tesla’s vision for the future of the Robotaxi just emerged during the conference call after the release of Tesla’s Q1 2022 financial results.

During the call, Musk stated that the vehicle will be focused on cost per mile, and will be highly optimized for autonomy – meaning it will not have steering wheel or pedals.

“There are a number of other innovations around it that I think are quite exciting, but it is fundamentally optimized to achieve the lowest fully considered cost per mile or km when counting everything”, he said.

During the call, Tesla acknowledged that its vehicles are largely inaccessible for many people given their high cost and sees the introduction of Robotaxis as a way of providing customers with “by far the lowest cost-per-mile of transport that they’ve ever experienced. The CEO believes that the vehicle is going to result in a cost per mile cheaper than a subsidized bus ticket, and that it will ultimately be a major driver of Tesla’s growth.

During the Q1 2022 earnings call, Elon talked a little about the timeline for Tesla’s Robotaxi. Tesla plans to announce the vehicle in 2023 and begin mass production in 2024.

The difficulty in releasing an autonomous taxi is the self-driving aspect, which Tesla is still actively developing. The Robotaxi’s release date will continue to shift in line with Tesla’s progress on FSD.

During the earnings call there was no mention of the sensor suite that Tesla is considering for the vehicle but, or whether it would use a modified version of the company’s Full-Self Driving software to navigate its surroundings autonomously.

Their current approach relies solely on a camera system, unlike other automakers who are betting on a combination of cameras, lidar and radar.

During the call Musk seemed confident that their method would pay off later this year.

“With respect to full self-driving, of any technology development I’ve been involved in, I’ve never really seen more false dawns or where it seems like we’re going to break through, but we don’t, as I’ve seen in full self-driving,” said Musk. “And ultimately what it comes down to is that to sell full self-driving, you actually have to solve real-world artificial intelligence, which nobody has solved. The whole road system is made for biological neural nets and eyes. And so actually, when you think about it, in order to solve driving, we have to solve neural nets and cameras to a degree of capability that is on par with, or really exceeds humans. And I think we will achieve that this year.”

Musk has promised that all Teslas with FSD capability will be able to drive magnitudes safer than a human in the future. However, it’s not clear if Tesla stills plans to allow customers to hire out their vehicles as taxis in the future.

If Tesla is successful in achieving an autonomous driving vehicle that costs less than a subsidized bus ticket, that would revolutionize car ownership.

In the future it could actually be cheaper to use one of Tesla’s Robotaxis than to own your own car.

Plus, you’ll have the added benefits of being able to relax, and reach your destination safer and quicker than driving yourself. 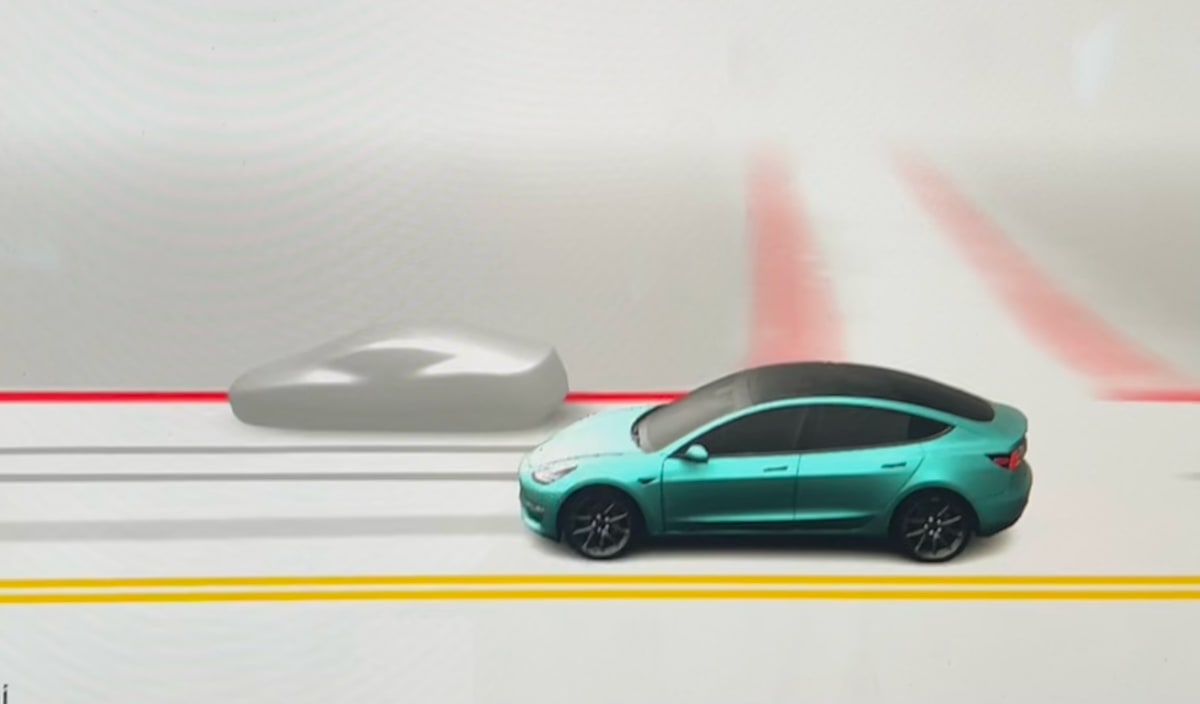 The next iteration of Tesla’s Full Self-Driving software, expected to be numbered 10.12, is supposedly making some improvements to the visualizations shown on the vehicle screen.

Most notably, it will now display a new render for sedan-type vehicles that will show wheels and highlight open doors in yellow.

Tesla has been gradually increasing the number of visualizations available on the car display, demonstrating what the car can perceive and respond to in its surroundings. In the beginning Tesla mainly displayed road markers and a few vehicles, and over time started to gradually add more types of vehicles, pedestrians, and traffic cones, speed bumps, even dogs.

The car’s visualizations aren’t linked to what the computer is capable of recognizing and using to make decisions, but it is very closely coupled with object detection so that drivers have a strong grasp of what the car can see, and therefore increased confidence in their vehicle’s self-driving abilities.

The statement gained credibility when it was replied to by Tesla CEO Elon Musk, who tweeted: “The esthetics of the new rendering will improve”. Musk did not elaborate on how else exactly the rendering would improve, or if we might see any other changes in 10.12.

Elon has previously said that Tesla will soon show vehicle turn signals, hand gestures and more in addition to brake lights. We may see future visualizations depict even more details such as open trunks, hazard lights and more.

In future iterations of the software, we can expect many more objects to be displayed, possibly including buildings, walls, trees, walkways, and other static items that the car will want to avoid. 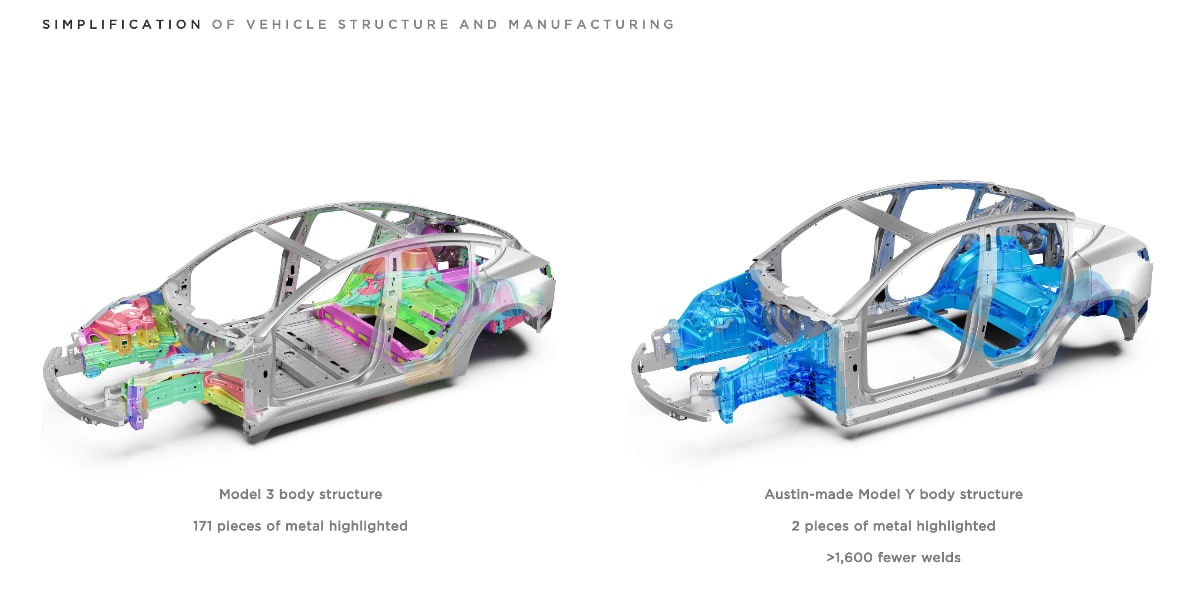 Revenue also rose 81% to $18.6 billion from $10.39 billion a year ago, thanks to higher average car prices and increased vehicle sales, the company said.

For the period ending March 31, 2022, Tesla reported $3.22 earnings per share. Since posting a record profit, shares have risen as much as 6% in after-hours trading. 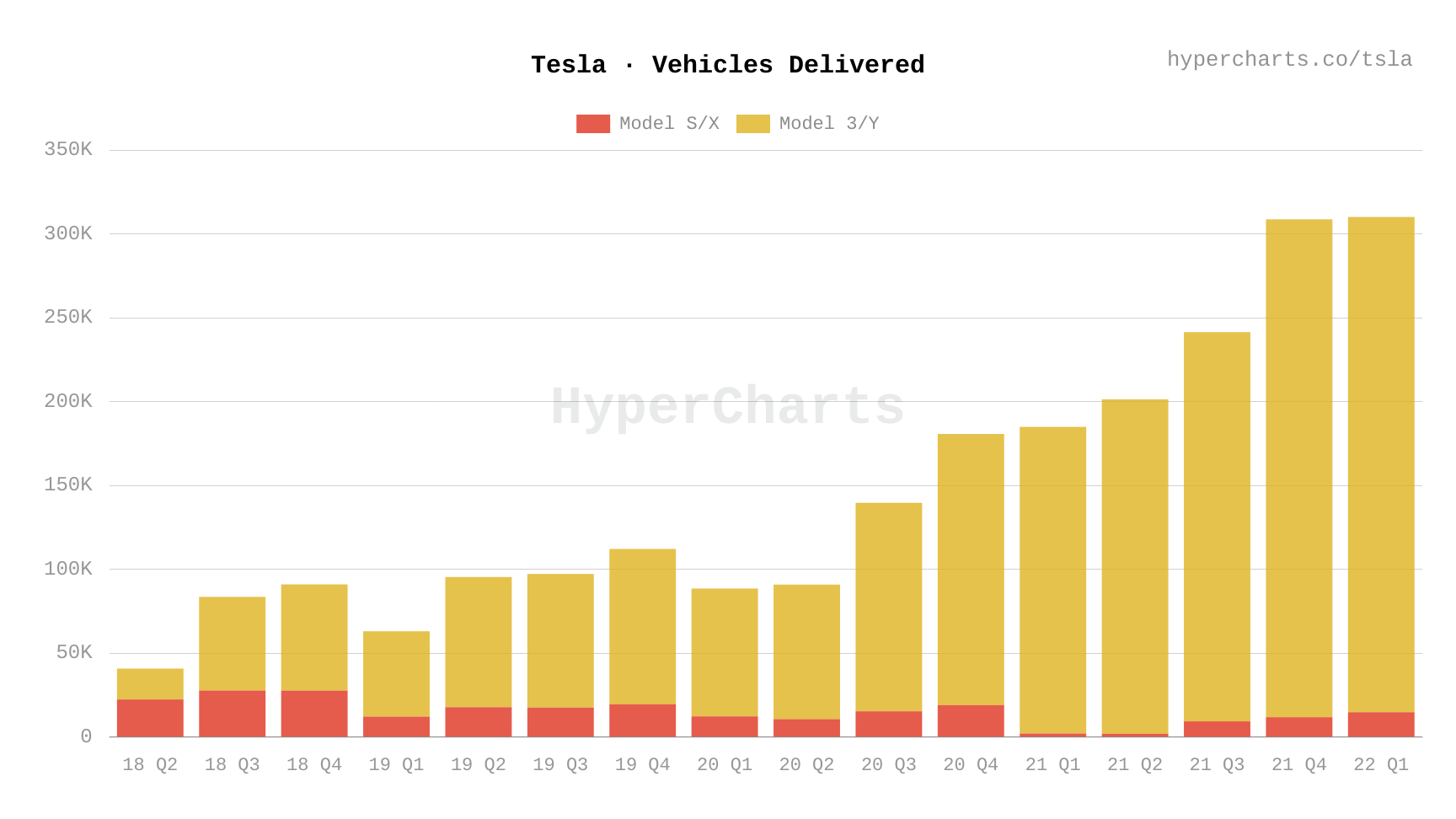 In its letter to investors, Tesla said supply-chain problems and raw-material prices costs have increased “multiple-fold”.

“Our own factories have been running below capacity for several quarters,” Tesla said in its shareholder deck. The company did not give detailed guidance on deliveries going forward, but said it expects 50% annual growth on a multi-year basis, and warned that supply chain constraints are likely to continue through 2022.”

Tesla said that a spike in COVID-19 cases caused a temporary shutdown of the Shanghai factory and shortages in the company’s supply chain. 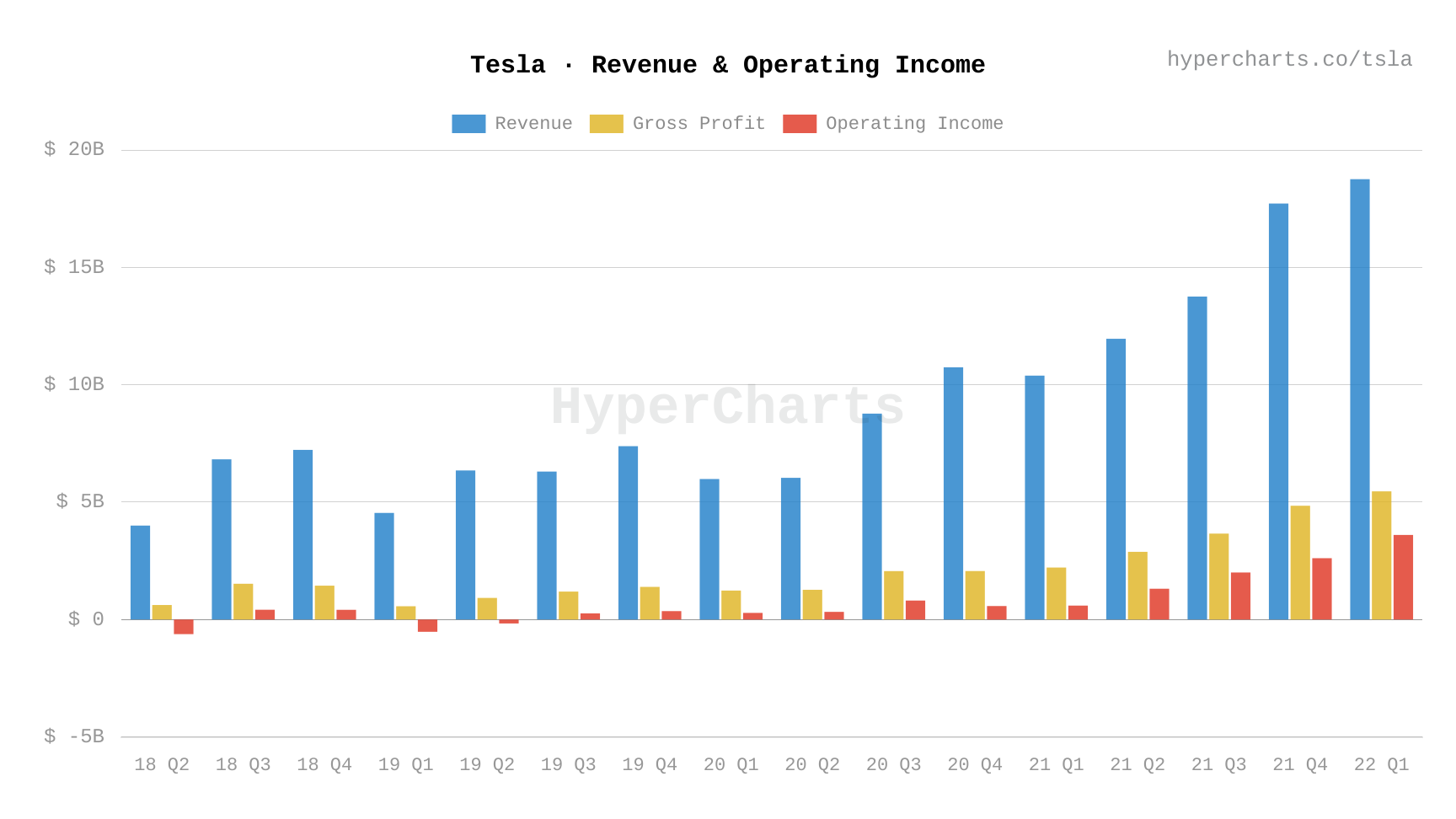 “Although limited production has recently restarted, we continue to monitor the situation closely,” the company said.

The ramp-up in the newer Texas and Berlin gigafactories will also depend on supply-chain obstacles, Tesla said.

The company also stated it would release its Full-Self Driving to all U.S. customers that opted for the $12,000 package “before the end of this year.”

Tesla says they are the 2nd largest insurer of Teslas in the state of Texas, and could be the largest by the end of next quarter. Tesla is now a fully integrated provider of insurance in the states (list of states) where they have released their insurance product.

On the earnings call, Elon confirmed Cybertruck production to begin in 2023 and a vehicle built for autonomy, without a steering wheel or pedals to be produced in 2024 which would be “a massive driver of Tesla’s growth.”

Elon also reiterated his stance on Tesla’s optimus robot, saying that it has more potential opportunity than the car business over time.

When asked about raw materials and scaling to extreme size, Elon stated that Lithium mining is the limiting factor to production. He later said that “Tesla will likely need to help the industry on this.”

When asked about the future of EV affordability, Elon stated that the robotaxi will provide the lowest cost per mile of transport ever, a 5x-10x reduction, making it accessible to everyone. Based on their projections, it appears that a robo taxi will cost less than a subsidized bus/subway ticket.

Twitter user @DBurkland put together this overview of everything that was discussed during the earnings call.

You can also find outlines from previous earnings calls on his website DBurkland.com.