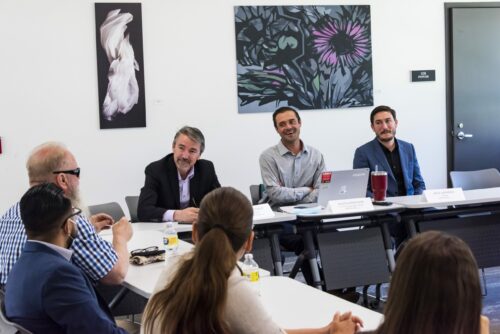 Chargie, a Culver City electric charging station installer, recently participated in an electric car show and event sponsored by California State University – Northridge.
Chargie Chief Executive Zach Jennings discussed the future of electric vehicles, electric charging and the company’s approach, which is to install its chargers in large structures at institutions like universities such as CSUN, retail areas as well as residential complexes.

Their business model is to be responsible when it comes to the charging itself. The company uses software that can change the amount of demand on the power grid based on how much grid pull each car has at a particular time, he added.
Yan Searcy, the dean of CSUN’s College of Social and Behavioral Sciences, organized the event. He wants the school to be at the center of what he would like to see called the Sustainable Valley.

To that end, the school’s Institute of Sustainability held the show on April 7 that included test drives of electric vehicles and a roundtable discussion about the cars from two area businesses – Porsche of Woodland Hills and Chargie.
Chargie brought two BMW i3 electric hybrids but just to display their charging capabilities and not for test drives.

For the roundtable, the audience was made up of 25 invited community members and another 22 people accessing the session through a Zoom link.
“Most everybody sitting around the table learned a lot,” Searcy said.

With the Chargie system, if people plug in at night, for example, the company has the ability to manage the electrical draw time so that it won’t be as demanding on the grid, Searcy said.
“From a business standpoint he said that’s what makes them a bit more competitive than others because they have the software to manage that and have a more sustained approach to charging and can pass some of that savings on to customers,” Searcy added.

Also participating in the car show was Electra Meccanica, a Canadian electric car manufacturer. The company did test drives of its Solo three-wheeled electric vehicle, technically classified as a motorcycle.
In the Los Angeles area, Electra Meccanica has four facilities: a kiosk at the Westfield Fashion Square in Sherman Oaks, the Beverly Center and the Del Amo Fashion Center in Torrance; and a delivery preparation and service center in Studio City.

“While Northern California, the Bay Area is known as Silicon Valley, we want to be known for and by the Sustainable Valley,” Searcy said.
The Woodland Hills Porsche dealership brought the all-electric Taycan, Panamera and Cayenne SUV for test drives.

Other electric car companies, including Lucid Motors USA Inc. in Newark and Polestar, the Swedish car maker that is a subsidiary of Zhejiang Geely Holding Group Co., Ltd., were contacted by Searcy but didn’t make it.
Also, Tesla had a backlog of orders and couldn’t bring any cars to the show and so declined to participate, Searcy said.

2021 Tesla Model S Plaid due for reveal and first deliveries…