Siri is not the only one unable to connect at this time. Automakers are having a tough time connecting new car owners to their smartphones, according to J.D. Power's annual Initial Quality Study released Tuesday.

New car owners complained loudest and most frequently about the quality of Android Auto and Apple CarPlay connectivity. Dropped or interrupted connections, as well as poor functionality, irritate new car owners more than the usual suspects such as voice commands, which had been the top complaint in the study every year for the past decade.

“This year there are many examples of smartphone technology not working as intended in new vehicles," Dave Sargent, vice president of automotive quality at J.D. Power, said in a statement. "With more vehicles being fitted with the wireless technology owners want, the study reveals an increase in connectivity problems between smartphones and vehicles, leaving many owners unhappy.”

The more companies that equip their cars with wireless smartphone connectivity, the more faults owners found with the convenience technology. Whether the fault lies with the supplier or the automaker is inconsequential to new car owners, the report found.

"Owners don’t care who’s at fault—they just want their phone and their vehicle to talk to each other,” Sargent said.

Broadly, infotainment systems account for 25% of all complaints, even though infotainment is one of nine categories. The 223 listed problems owners can choose from in the sweeping survey are broken down into nine categories such as Interior, Powertrain, Seats, Climate, Driving Experience and others. The survey reflected the opinions of 110,827 owners and lessees of 2021 models in the first 90 days of ownership across all 50 states.

There’s one exception. Unlike every other automaker, Tesla wouldn't share sales data with J.D. Power from 15 states, prompting J.D. Power to extrapolate data from the 35 states compelled to release sales data. 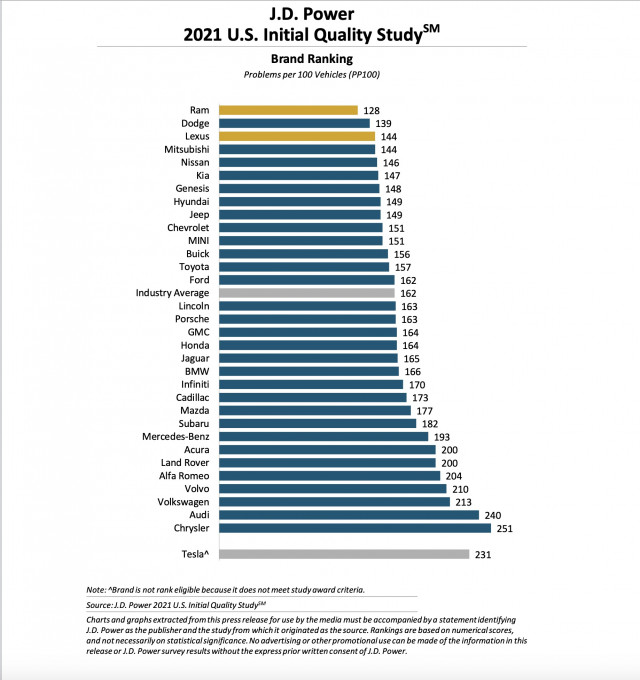 Fortunately for owners and automakers, the quality improves each year as measured by a drop in complaints. J.D. Power tabulates the number of problems reported per 100 vehicles (PP100) and ranks makes and models accordingly. The lower the number, the better the quality. Each year, the industry as a whole receives an improvement of 3%, as measured by fewer complaints, but that improvement was only 2% from 2020 to 2021.

The survey typically skews better for carryover cars that have been around for a while and don't have the latest and greatest technology. New or refreshed cars with the latest tech and interfaces suffer the fate of trailblazer, leading the industry like a north star or taking up the rear as a donkey.

That helps explain why Dodge had the fewest complaints as a brand last year, and comes in second this year, followed by Ram, who led the pack with just 128 problems per 100 vehicles. Lexus came in third at 144, tied with Mitsubishi, and Nissan rounded out the top five brands with a 146. None of those brands are known for cutting-edge technology on their cars. The same can't be said for Genesis, which, in the midst of a product onslaught headlined by the 2021 GV80 mid-size SUV and 2022 GV70 compact crossover, finished as the second best luxury brand behind Lexus with a 148.

Chrysler and Audi took up the rear, at 251 problems and 240 respectively. Tesla finished third worst, with an estimated 231 PP100.

The 2021 Nissan Maxima, which was last redesigned for 2016, had the highest rank of any car model, with 85 problems reported per 100 vehicles.