The 2022 Ford Maverick tackles a conundrum many American families have faced for years: They might like the idea of a truck, but all of the pickup options are far more mammoth, more capable, and thirstier than what they need for the occasional weekend-adventure gear or home-project needs.

In its standard form, the Maverick offers a 1,500-pound payload (yes, a true three-quarter-ton lug) and can tow up to 2,000 pounds, which Ford points out is enough for a pair of personal watercraft or a pop-up camper trailer. And with a standard hybrid powertrain, the Maverick is due to earn an EPA-estimated 40 mpg city.

At 199.7 inches long and 68.7 inches high, with a width of just 72.6 inches, the Maverick still isn’t as small as that Ranger you remember from the past, but it shouldn’t present any of the clearance issues that larger trucks might present at shopping-center parking lots or home garages.

In the cab and in the bed, Ford has crammed storage and utility options into the Maverick in a way that the weekend crowd should appreciate. An accessory package will bring all sorts of storage dividers, and the 4.5-foot long bed has a halfway-open position for the tailgate to help securely carry up to 18 sheets of 4x8 plywood. Clamps in the tailgate double as bottle openers, and the bed height is very low for easy loading.

The base Maverick is driven at the front wheels and has a 162-horsepower, 2.5-liter inline-4 engine and 94-kw electric motor as part of Ford’s planetary gear hybrid system, together making 191 horsepower. Don’t expect it to be quick. The Ford Escape Hybrid, weighing slightly less with a version of the same hybrid system, manages a 0-60 mph time in the eight-second range.

Like most hybrids, the Maverick won't get the kind of mileage on the highway as it does in city driving. Ford notes that its targeted EPA combined rating is 37 mpg, which places its highway rating at 33 or 34 mpg. Ford boasts that its 13.8-gallon tank will be enough for a 500-mile range. 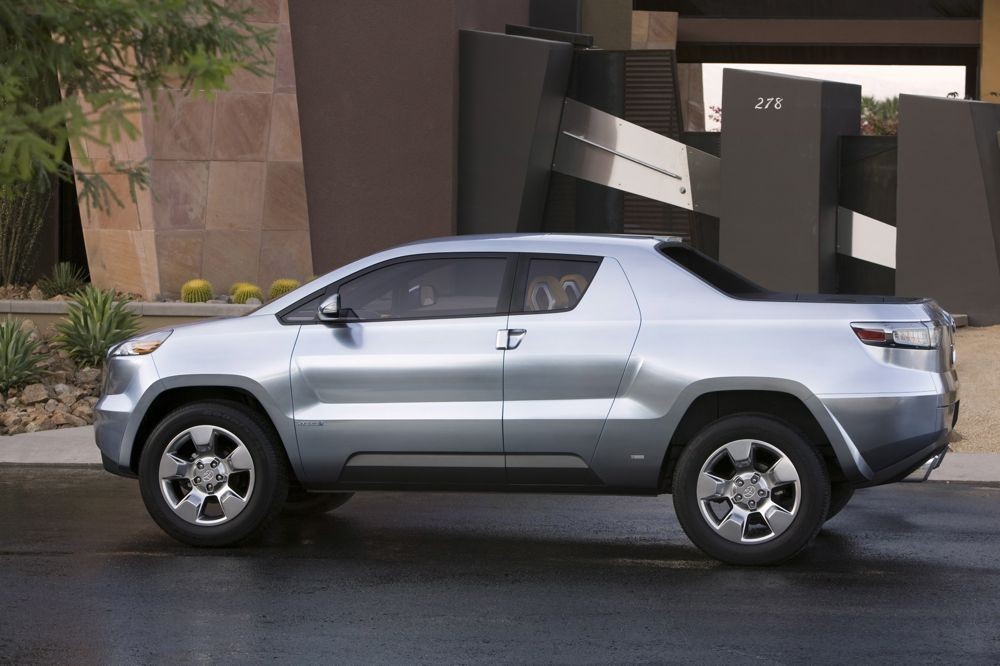 Toyota has promised compact hybrid pickups for more than a decade (as with the A-BAT concept shown above). With the F-150 Hybrid already out and the Maverick coming soon, this means Ford has solidly beat them to the punch.

The lineup isn’t all-hybrid though. An optional 2.0-liter turbo-4 engine makes 250 hp and 277 lb-ft and doesn’t include the hybrid system. With an 8-speed automatic transmission, it’s the choice for those who want to tow or, because of the way Ford has engineered its hybrid system, for those who need all-wheel drive. The aptly named 4K Tow Package boosts the towing capacity from 2,000 pounds to 4,000 pounds.

The Maverick is based on Ford’s global C2 platform, which underpins the latest Ford Escape (including Escape Hybrid and Escape Plug-In Hybrid versions), the Ford Bronco Sport, and the Lincoln Corsair. There’s no gap between the cab and bed, and it rides on a front strut, rear twist-beam suspension; non-hybrid all-wheel-drive models get an independent multi-link rear suspension. All versions get four-wheel disc brakes. In a press release, Ford engineering specialist Keith Daugherty called the bed itself “a DIY fan’s paradise,” and emphasized that while you can buy cargo management solutions from Ford, it’s designed so that you can create your own by sliding 2x4s or 2x6s into slots stamped in the side of the bed, in combination with tie-downs and threaded holes.

The truck also comes with standard built-in 12-volt electrical power going to the inside of the bed in a separate fused circuit. There are also two available 110-volt, 400-watt outlets—one in the bed and one for the cabin. While these aren’t the kilowatt-level outlets you’ll find in an F-150 Hybrid or F-150 Lightning electric pickup, they should be good for accessories, chargers, or even some tools.

Ford hasn’t yet detailed Maverick features, but it comes standard with an 8.0-inch touchscreen system with Apple CarPlay and Android Auto compatibility, and as will an embedded modem and a full suite of active safety features. The Maverick will be offered in XL, XLT, and Lariat models, with a wide range of 17- and 18-inch wheel designs and an off-road-themed FX4 package offered on all-wheel-drive (non-hybrid) models. A First Edition paints the roof gloss black, with a soft tonneau cover plus machined 18-inch wheels for the hybrid, and a choice of three colors unique to this intro version.

The 2022 Ford Maverick arrives in fall 2021, and Ford says that it is accepting reservations and orders starting today.

Opinion: The Mustang Mach-E Really is A Mustang, and Let’s…