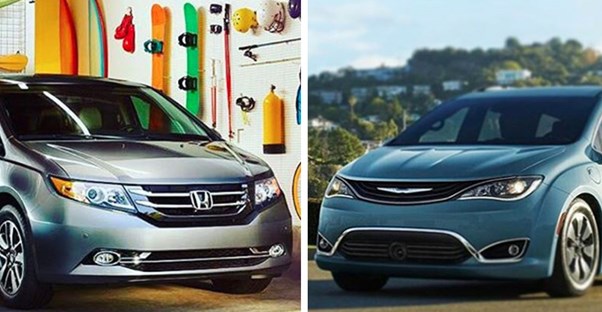 The Honda Odyssey and Chrysler Pacifica are both well-regarded, top-selling minivans. The Pacifica tends to be the top-seller, but the Odyssey’s redesign makes it a strong contender. We’re here to help you navigate the landscape and pick the minivan that’s best for you.

Minivans are already expensive, and you don’t want to pay thousands more for a vehicle that is just mediocre. Thankfully these two are decently priced. The Chrysler is the cheaper option with a starting MSRP of $36,000 for the base Touring trim.

The Odyssey is the less expensive of the two with a starting MSRP of $33,040 for the LX trim. That’s not a terrible difference considering how much money is involved, but what do you get for that extra cash? Let’s look at the other differences to figure that out.

You want as much space as you can get out of a minivan, but that doesn’t mean that you want to sacrifice fuel economy too much.  A minivan that uses a lot of gasoline may not save you money in the long run. Gas prices are staying pretty low, but filling the tank in a minivan still isn’t the cheapest thing you can do.

Both the Odyssey and the Pacifica get relatively good fuel economy based on their weight and V6 engine size. The Pacifica manages 19 mpg in the city and 28 mpg on the highway. The Odyssey gets the same city mileage at 19 mpg, as well as a highway fuel economy at 28 mpg.

How much can you haul? Whether you’re moving people or cargo, you need all the space you can get. Both of the base trims can carry seven passengers, but only the Odyssey can upgrade the passenger space to eight when you purchase the EX, SE, EX-L, Touring, or Touring Elite.

How much stuff can you store? Both minivans have a lot of space for you to store pretty much anything. The Pacifica has 32.3 cubic feet of luggage space with the third row seats up, but if you fold them down, you can get up to 140.5 cubes. Alternatively, there are 38.6 cubic feet of space with the Odyssey’s third-row seating up and 140.7 cubic feet with all seating down.

What made the Chrysler Pacifica stand out this year was the upgrade in the interior. There are many optional convenience and luxury-based features available for someone that doesn’t mind paying a little more, but even without them, the cabin has an upscale feel for the price.

The Honda Odyssey’s last major remodel was in 2021. Major feature upgrades to the interior and exterior have put it on a better playing field in that department. The cabin looks sleek, but it falls a little short when compared to the Pacifica. The number of features included standard are nothing to scoff at, but the Pacifica just adds more for the price. Standard since 2021, are numerous active safety features.

First Drive Review: 2022 Kia EV6 electric car is a hoot, and it hits reset for the brand

Every 2020 Compact SUV Ranked from Best to Worst

Review update: Could the 2022 Ford Maverick be my teens’…