2022 Audi E-Tron GT electric car: Up to 238-mile range for quickest quattro yet

The two quickest-accelerating production cars in Audi history are made in the same factory. One of them has a big V-10 engine and is rated at 16 mpg. The other—the quickest of the two to 60 mph—is the 2022 Audi E-Tron GT, and it’s all-electric.

Audi on Tuesday officially pulled the wraps off that electric powerhouse, which boasts 0-60 mph in an official 3.1 seconds—0.1 quicker than Audi’s listed time for the R8 V10 Performance. The E-Tron GT and RS E-Tron GT were developed on the Porsche Taycan’s J1 platform, sharing its fast-charging 800-volt battery and propulsion components.

Athough this is the first official look we’ve had of the production car—even virtually—it’s familiar in many respects. The shape and sheetmetal haven’t changed significantly since its 2018 concept debut. Looking inside, even the cabin carries over mostly unchanged from concept form, a rarity in the industry. One noteworthy difference is that the GT instead uses a five-layer carbon-fiber reinforced plastic roof, which Audi says is the first for any vehicle from the brand.

Like the Taycan, the E-Tron GT can charge at 270 kw using the 800V hardware, allowing it to go from 5% to 80% in just 22.5 minutes, or gain about 60 miles of range in 5 minutes. The battery and propulsion systems have four different cooling circuits

The E-Tron GT is powered by permanent-magnet motors at the front and rearmaking a combined 469 hp and 464 lb-ft of torque, or up to 522 hp in a 2.5-second overboost mode with launch control. The GT can accelerate from 0-60 mph in 3.9 seconds and hit a top speed of 152 mph. 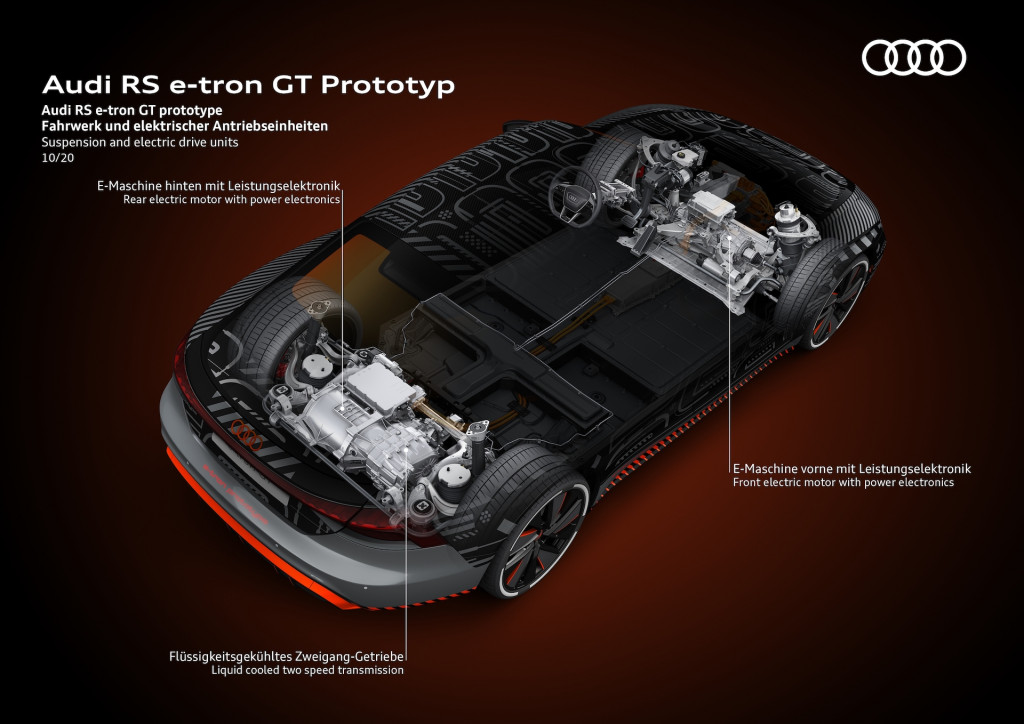 The Audi Sport–tuned RS E-Tron GT subs in a more powerful rear motor plus upgraded propulsion hardware that bumps the output of the system up to 590 hp and 612 lb-ft of torque, or 637 hp in overboost mode. That enables a 0-60 mph time of 3.1 seconds and a top speed of 155 mph.

Audi says that’s on par with acceleration of the V-10-powered R8. A 2-speed gearbox at the rear wheels allows the E-Tron GT to combine a strong launch with better efficiency at higher speeds—and at least in concept, a higher top speed.

The three-chamber air suspension can adjust the ride height 0.9 inch downward or 0.8 inch upward from its base level, and it works together with standard adaptive dampers. The optional all-wheel steering system can turn the rear wheels up to 2.8 degrees in the opposite direction of the fronts at lower speeds, or in the same direction at a lesser angle above 30 mph.

Additionally, a multi-plate rear-axle differential lock is standard in the RS E-Tron GT and optional in the E-Tron GT; it allows the driver to produce the most effective launches and enables precise fine-tuning of traction and handling. 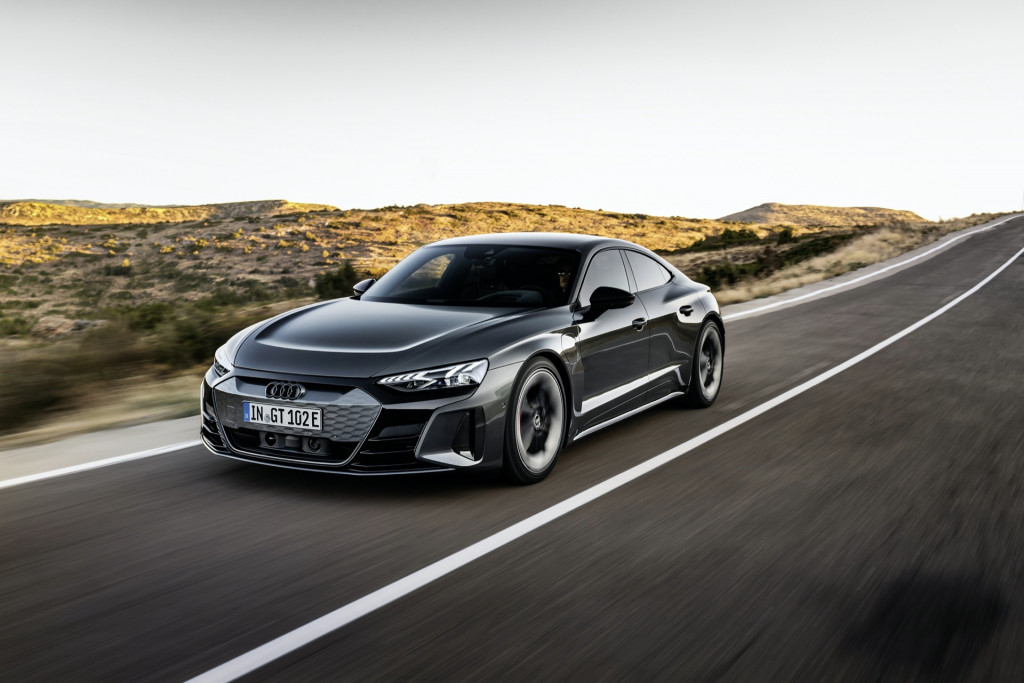 Audi promises the GT has its own driving characteristics versus the Taycan. Audi Sport’s head of chassis development, Roland Waschkau, said the company had control over the “governing dynamic philosophy,” including the way the suspension is tuned, how torque is split between the motors, and how the stability control behaves.

The E-Tron comes with a “sport sound” that changes its mix as you drive. It was inspired by a plastic pipe, with a basis of 32 sounds including those of a cordless screwdriver.

Audi will build the E-Tron at its Böllinger Höfe plant that also builds the R8 supercar. Audi boasts that production for the model entirely uses electricity from biogas and budgets for carbon credits for “emissions that cannot yet be avoided.”

Audi Sport did extensive testing at Italy’s Nardo track, as well as in Sweden for cold-weather testing. “We tried to trim the car to the very best GT/Gran Turismo car,” said Washkau. 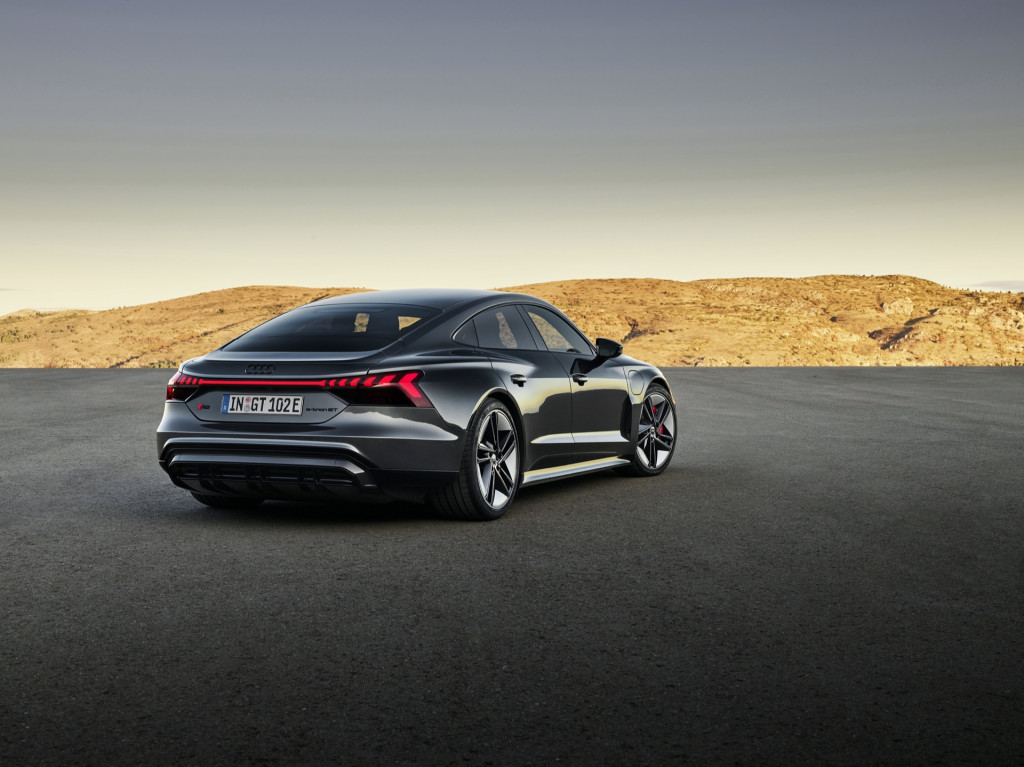 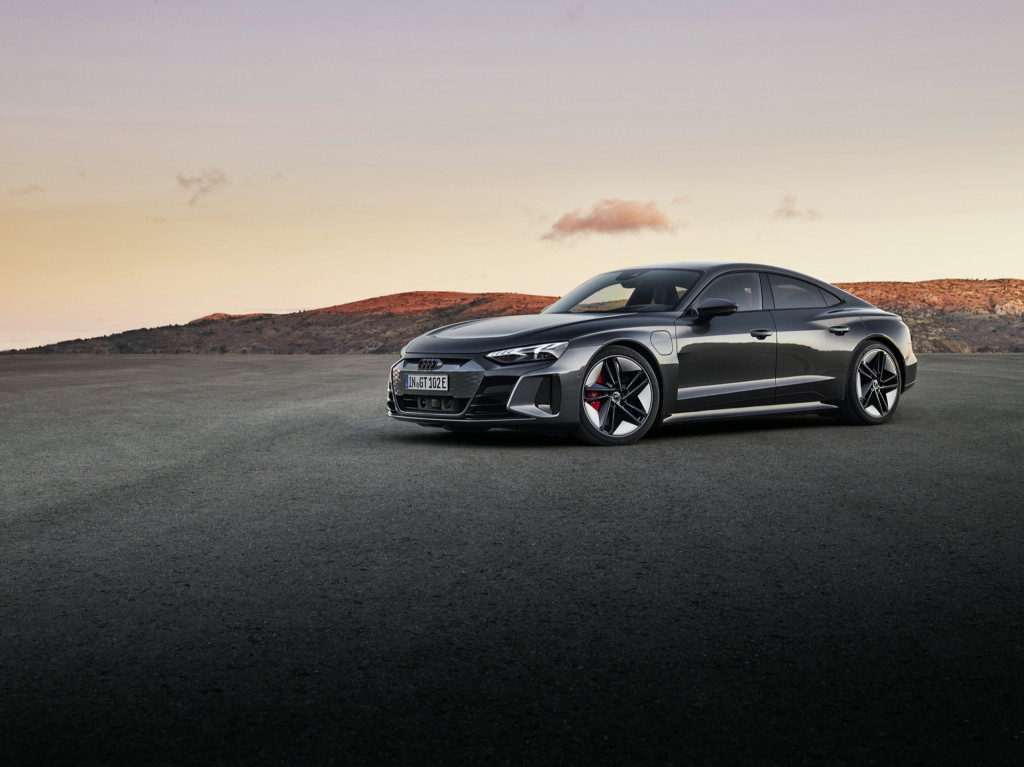 The GT has a low coefficient of drag of 0.24, and it has radiator and brake-duct air intakes that can close when they’re not needed.

The GT’s spoiler, which can be manually deployed, automatically extends to its uppermost position at 118 mph and reduces rear lift by as much as 60 pounds in its extended mode, according to Audi AG head of aerodynamic development Moni Islam. He noted that the wheels contribute more than a third of the aerodynamic drag, so Auid paid a lot of attention to wheel designs as well. 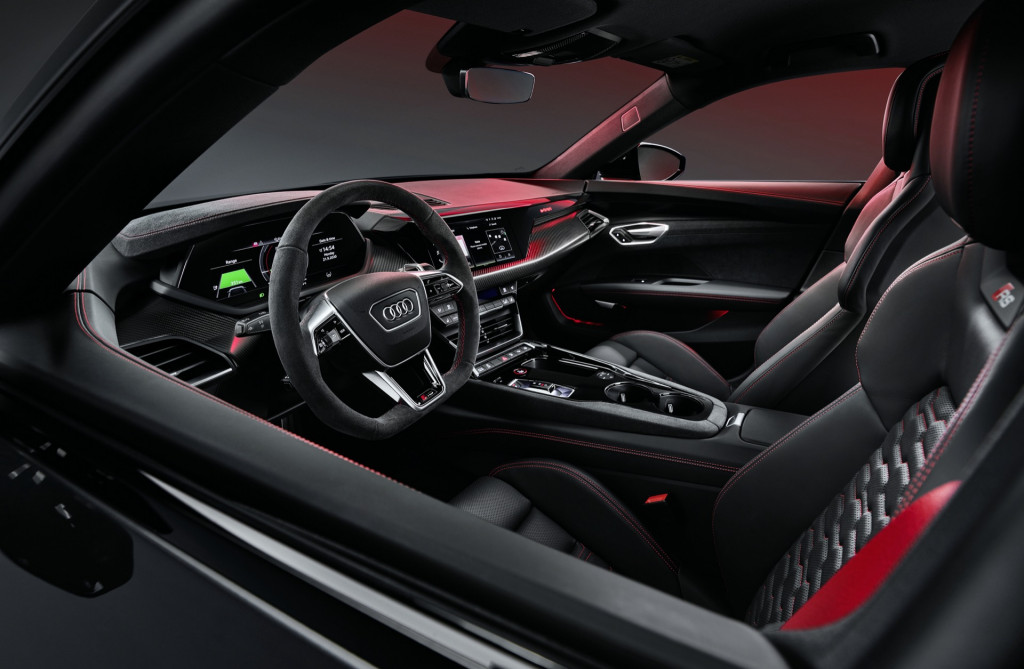 Past the interior’s flat-bottom steering wheel, the gauge layout sits within a 12.3-inch virtual cockpit display. Angling toward the driver is a single-screen version of the layout used in Audi’s E-Tron SUV and Sportback models, with a 10.1-inch MMI Touch Response display. A leather-free interior with Dinamica and Alcantara materials is standard, but Nappa leather upholstery is available.

Green Car Reports asked Audi specifically to show us the trunk and the back seat. With flip-forward seatbacks, the E-Tron has a good amount of space available inside for skis or even bikes.

Available Bang & Olufsen sound delivers 710 watts from 15 speakers. The RS E-Tron GT adds sport seats with 14-way power adjustments, and you can opt for an pneumatically adjustable side bolsters, heating/cooling, and a massage function. 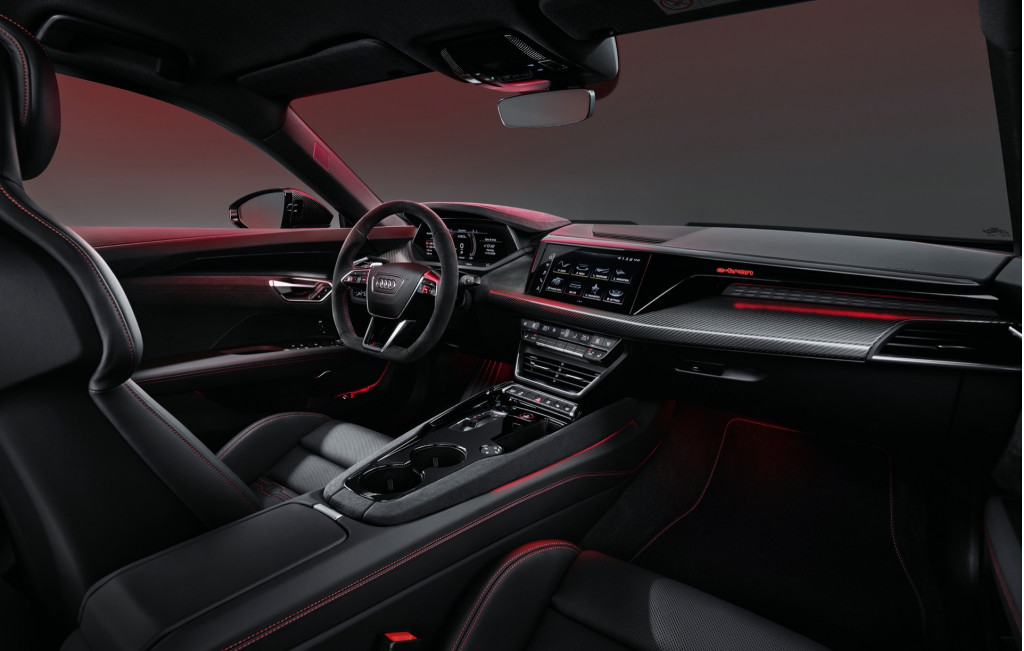 Note that the E-Tron GT is badged “quattro,” which potentially leaves the option open for a rear-wheel-drive version like that being introduced this year for the Taycan.

Audi is aiming for electrified models (plug-in hybrids and EVs) to make up 30% of its global portfolio by 2025. The company is also aiming to reduce vehicle-specific CO2 emissions by 30% by 2025. The Q4 E-Tron SUV and Sportback are expected to debut by the middle of the year and hit the market by the end of the year.

In building the E-Tron GT and R8 under the same roof, Audi has provided a glimpse of the past, present, and future of performance and grand-touring cars.

Putting the Entire Service Process in the Palm of the Customer, Xtime Invites Clients to Elevate Service and Profitability

Rimac shows how EVs are tested for electromagnetic…