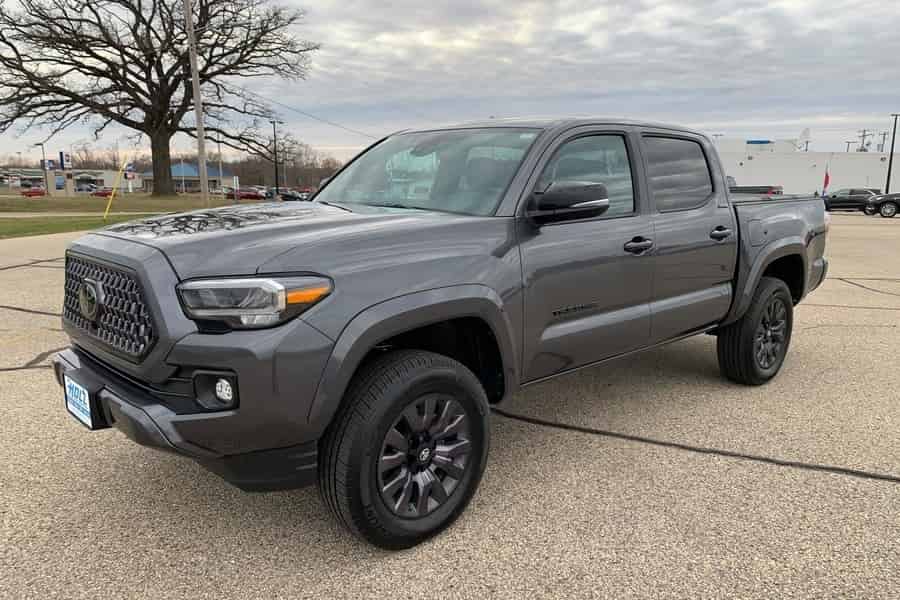 In the past, we’ve found the interior to be particularly dated when compared to some of the competition, but Toyota remedied that for the 2021 model year. The slight refresh includes so minor facelifting on the outside and a more modern design inside the cabin.

That’s greatly appreciated; however, if you can hold off for one more year, the Tacoma will have a full redesign for 2022 that is sure to bring new upgrades not just in features but also in structural components. Having said that, here a rundown of the trim levels for the 2021 Toyota Tacoma.

Starting at $26,250, the base trim of the Tacoma is only available as an Access Cab (2-doors with seating for 4) or as a Double Cab (4 doors, seating for 5). The Double Cab version raises the price to $27,080, but the bed is just over a foot shorter than the Access Cab’s.

The standard engine is a 2.7L 4-cylinder that is capable of 159 hp and 180 lb-ft of torque. An available 3.5L V6 engine (278 hp & 265 lb-ft torque) can be had for a price upgrade. When choosing the Access Cab, both engine options have 2WD and 4WD powertrains. For the Double Cab, though, the smaller engine is 2WD only, and the larger is 4WD only.

If you’re looking for the Voodoo Blue paint color, you won’t find it on this trim. But you will find a standard deck rail system and skid plates on the engine/front suspension. On the safety front, the Tacoma SR comes with Toyota Safety Sense P, which is a pre-collision system, lane departure alert, dynamic radar cruise control, and automatic high beams all rolled into one. With the V6 engine option, the front gains dual-zone climate controls.

The 2021 Toyota Tacoma SR5 has a starting MSRP of $28,040. That’s for the Access Cab, but we think most buyers will opt for the $28,930 Double Cab. The Tacoma SR5 also has a Double Cab option with a longer 6-foot bed (instead of the typical 5-foot). That pushes to price to $32,830 which may seem like a big jump, but it’s because the more powerful V6 is the only engine option for that layout. The two other cab options have a choice between the 4-cylinder and the V6.

In terms of standard features, the Tacoma SR5 is a nice step up to 16-inch dark gray alloy wheels. There is also a standard tire pressure monitoring system that tells you which individual tire is the problem. The steering wheel is also leather-trimmed and has tilt/telescopic positioning. Hill Start Assist Control and remote keyless entry are also standard on the Tacoma SR5. Plus, the interior has a modern 8-inch touchscreen audio infotainment system.

The 2021 Toyota Tacoma TRD Sport trim starts at $34,445 for the two-door Access Cab and $35,700 for the four-door Double Cab. The only engine option at this trim level is the 3.5L V6 engine with 2WD or 4WD powertrains. It is possible to get the 4WD powertrain with a manual transmission instead of an automatic, also. Doing so lowers the price from the 4WD automatic choice.

The most distinctive feature of the TRD Sport is the sporty hood scoop. You won’t see that feature again until the top-of-the-line TRD Pro trim. The wheels are a larger 17-in. machined alloy variety. A wireless smartphone charger and push-button start are also standard features. The driver’s seat is 10-way power-adjustable. The suspension is also sport-tuned, unlike other model variants. Voodoo Blue and Army Green, some popular choices, are available on this model as exterior paint colors.

For the 2021 Toyota Tacoma TRD Off-Road trim, the cheapest configuration is actually the Double Cab (5ft. bed) with two-wheel-drive, starting at $35,570. That’s because, while the two-door Access Cab is offered, it only comes paired with four-wheel-drive. The Tacoma TRD Off-Road also has the option to upgrade to leather seating, though that is an additional cost and not a standard feature.

Instead of being sport-tuned like the TRD Sport trim, the TRD Off-Road has (unsurprisingly) an off-road-tuned suspension with Bilstein shocks. It also has an electronically controlled locking rear differential that should help with varied terrain. Cosmetically, it looks similar to the Tacoma TRD Sport just without the hood scoop. It also has smaller 16-inch machined-contrast wheels.

The Toyota Tacoma Limited trim is only offered with a Double Cab configuration, with choices between the 5-ft. and 6-ft. length beds. The former is the cheapest beginning at $39,005. Again, the V6 engine is the only option with choices of two- and four-wheel-drive powertrains. The biggest note of this trim is the standard leather seating around the cabin.

You’ll also find chrome accents around the exterior of the vehicle, specifically the grille, mirror caps, and door handles. It also comes standard with the largest wheels available (along with the TRD Pro trim). They are an 18-inch polished alloy version. Also standard is a panoramic view monitor. The infotainment system comes standard with premium audio and dynamic navigation.

The 2021 Toyota Tacoma TRD Pro is the cream-of-the-crop when it comes to Tacoma trims. It is only configured as a four-wheel-drive, Double Cab (5 ft. bed) model. While it technically starts at $44,175, that is for the manual transmission. Most buyers will be spending at least $46,880 for the automatic.

On the exterior, the Tacoma TRD Pro only has four paint color options. However, in addition to the traditional black, white, and gray, the fourth color (Lunar Rock) isn’t offered on any other Tacoma trim. We quite like the Lunar Rock color; it’s similar to celadon green, combining light gray with undertones of pale green. It made the jump over from the RAV4 where it has been one of the most popular color options.

Other unique features include a distinctive “TOYOTA” grille and TRD Pro-branded seating with red accent stitching inside the vehicle. It also comes standard with TRD Pro floor mats and a unique shift knob. A multi-terrain monitor with a camera is also helpful when heading off the beaten path.

Rare Rides: The Sporty and Very Rare 1991 Mitsubishi Debonair, by AMG (Part I)