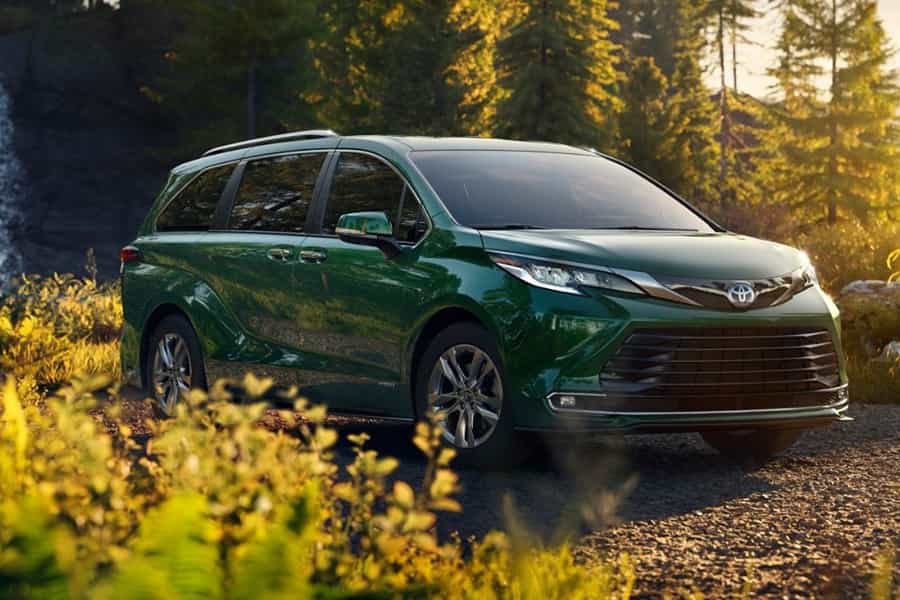 The 2021 Toyota Sienna has been completely redesigned for the 2021 model year. Besides all the new exterior styling, one of the biggest changes is under the hood.

This new fourth-generation Sienna is hybrid-only, featuring a 2.5L 4-cylinder engine. The EPA estimates the hybrid engine’s fuel economy rating at 36 mpg on both highway and city driving. With the 18-gallon fuel tank, that gives the Sienna a range of 648 driving miles. That makes it the perfect choice for your next family road trip!

The 2021 Toyota Sienna LE starts at $34,460 and has plenty of family-friendly features for a base model vehicle. The interior has enough room for eight passengers and a six-speaker audio system. This system has Android Auto, Apple CarPlay, and Amazon Alexa compatibility.

There are still more highlights with the Toyota Sienna LE. You get a 60/40 Split & Stow third-row that is great for extra cargo. You also get second-row tip-up or long-slide seats, an integrated backup camera, and three-zone automatic climate control for when your family members have different temperature preferences. There’s an all-wheel-drive version for an extra $2,000.

The 2021 Toyota Sienna XLE has a price of $39,750, and it’s very similar to the Sienna LE with the exception of a few crucial features that families may want. One of the best upgrades is the addition of hands-free dual power sliding doors. There’s also a power liftgate with jam protection. The door handles are also chrome-accented.

Buyers can opt for an all-wheel-drive powertrain. It ups the starting price to $41,750, but it will give you peace of mind during wet or icy conditions. To be clear, this isn’t for off-roading. It’s for sure-footedness. Starting with this trim, there’s also a power moonroof that comes standard.

The Sienna XLE also upgrades the seating to SofTex synthetic leather seats. Both front seats are heated. The driver gets an 8-way powered seat; the passenger is 4-way power-adjustable. The seating configuration can also be adjusted between 8-passenger (middle- and third-row bench seating) or 7-passenger (two middle-row captains chairs and a third-row bench). it’s worth noting that the AWD model only comes with the 7-passenger setup.

The 2021 Toyota Sienna XSE is a bit more sporty than the other trims. It adds some cosmetic touches like black side rocker panels and a metallic black sport mesh grille on the front of the vehicle. The heated, power side mirrors are also black, and the wheels are 20 inches instead of 17.

Inside, the driver has the option of yelling at the back seat through the addition of an in-car intercom system called Driver Easy Speak. The seats carry over the performance-focused theme with sport-trimmed SofTex. The 7-passenger configuration is the only option for this trim.

The FWD version starts at $42,250. The all-wheel-drive option on this trim is one of the best bargains. It only adds $510 to the starting price.

The 2021 Toyota Sienna Limited starts at $46,700. The difference between this trim and the Sienna XSE is that the Sienna Limited is more focused on luxury than sporty styling. Gone is the sport mesh grille, and in its place is a dark gray metallic one. Similarly, the black side mirrors are replaced with body-colored ones. The wheels shrink down to 18 inches from 20, though they are larger than the wheels on the first two trim levels.

Instead of black accent styling, the Sienna Limited has chrome. It can be found on the roof rails and the rear lower bumper. This is also the first trim to come standard with a wireless phone charging pad. The leather seating is also upgraded to have heating and ventilation (in the front, at least). The captain’s chairs in the second row get a nifty ottoman feature for when you really want to put your feet up.

The 2021 Toyota Sienna Platinum has an MSRP of $49,900 for FWD and $50,535 for AWD. It’s the top-of-the-line model and offers the best in safety, comfort, and convenience. There’s also a 10-inch heads-up display so drivers don’t have to take their eyes off the road to see vital information. Don’t worry about your windshield wipers again because these sense the rain for you.

The second-row captain’s chairs also get heated seating on this trim. The third-row seats fold down or up at the press of a button. This top trim is also the only one with front and rear parking assist sonar, though the starting price is beginning to get expensive compared to competitors. There is also a bird’s-eye 360-degree parking view.

Every 2021 Small Luxury Car Ranked from Best to Worst

Every 2020 Small Luxury Car Ranked from Best to Worst

Every 2020 Compact Car Ranked from Best to Worst

Why Video is Important to Communicate with Your Customers

NASCAR Ready For Circuit of The Americas Races in May