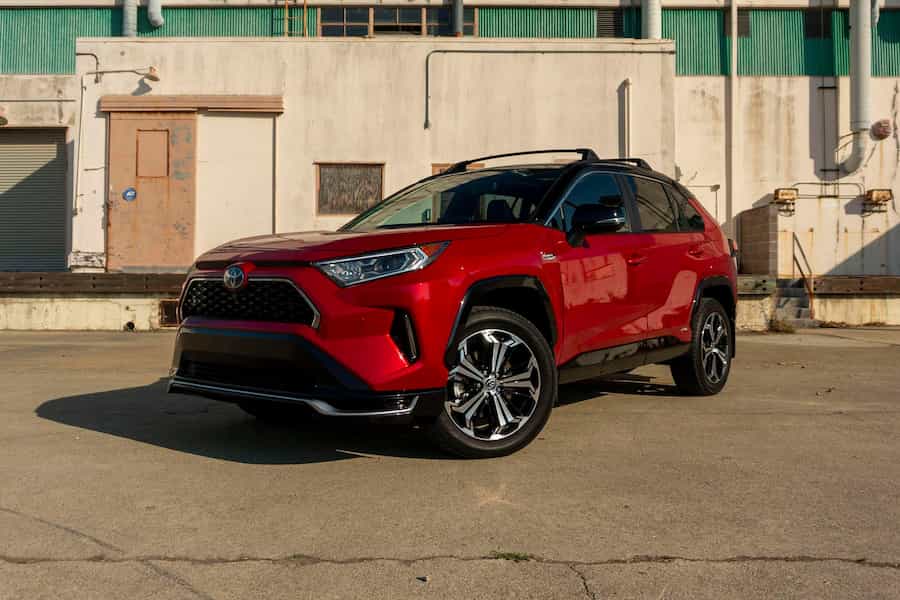 The 2021 Toyota RAV4 puts on a fresh face following a complete redesign. It’s sportier, more rugged, and a more competitive offering than in previous years. After this detailed guide, you’ll be able to pick which trim level is your favorite based on which features are included at which price point.

The 2021 Toyota RAV4 LE has a price comparable to many four-wheel-drive sedans, with a starting MSRP of $25,500. Due to the fact that the SUV is relatively small, it isn’t equipped with a massive engine as you’d find in a full-size SUV similar to the Chevy Escalade. Drivers will find a 2.5-liter, 4-cylinder, 203-hp engine, which can get up to 26 mpg in the city and 35 mpg on the highway.

The exterior has a uniquely bisected C-pillar which makes it stand out from some other SUVs on the market. It also includes roof rails, as well as privacy glass on the rear side, quarter, and liftgate windows. On the inside, the RAV4 LE is equipped with Entune Safety Connect and Entune 3.0 Audio. This audio/infotainment system features a 7-inch touch-screen display, voice-activated AM/FM radio, hands-free phone capability, Bluetooth connectivity, and six speakers. Finally, the RAV4 LE also includes cruise control, remote keyless entry, a backup camera, and two 12-volt outlets.

The safety features for the RAV4 LE include the Toyota Safety Sense package—which is standard in nearly all their vehicles. It includes a pre-collision system with pedestrian detection, lane departure alerts with steering assist, automatic high beams, and dynamic radar cruise control. You also get a suite of safety features designed to aid braking, traction, and stability.

An all-wheel-drive (AWD) version is available for $26,900, though it reduces your fuel economy.

Along with the traditional gasoline engine-version RAV4, Toyota also updated the hybrid electric versions of this compact crossover. The least expensive hybrid offering, the 2021 Toyota LE Hybrid, has a starting MSRP of $27,700. All hybrid RAV4 trims automatically include Electronic On-Demand AWD. The engine on this hybrid trim is capable of 176-hp and can get up to 41 mpg in the city and 38 on the highway. Those combined fuel ratings make the RAV4 LE Hybrid the second-most fuel-efficient SUV on that market that you don’t have to plug in!

Ultimately, the bump in price isn’t just for a hybrid, it’s for an AWD powertrain, also.

The 2021 Toyota RAV4 XLE is a step up from the previous trim. With a starting MSRP of $27,300, it comes with a lot more features. Buyers may notice front bumper fog lights as an exterior addition that sets this trim apart from the RAV4 LE. The RAV4 XLE also has turning signals indicators, power remote heated folding side-view mirrors, and a powerslide moonroof with sunshade.

You can also control the audio from the leather-trimmed steering wheel. Plus, the multi-LED headlights have an auto on/off feature on this trim. What really sets the RAV4 XLE apart from its lower-priced sibling is that buyers can opt for an array of add-on packages. These include the XLE Convenience Package, 3.0 Audio Plus, and an XLE Tech package. The RAV4 LE didn’t have this opportunity. Buyers could only spend more for blind spot monitoring.

There is also a 2021 Toyota RAV4 XLE Hybrid with a starting MSRP of $30,795. It doesn’t include many upgrades other than the 2.5-liter, four-cylinder engine. The hybrid electric engine makes it possible to get up to 41 MPG in the city and 38 MPG on the highway without plugging it in to charge. Those numbers might not sound great compared to a Prius, but it’s impressive for any SUV. Like all RAV4 hybrid models, an electronic on-demand smart AWD system is the standard powertrain.

The 2021 Toyota RAV4 XLE Premium trim starts at $29,500. This trim level isn’t offered as a hybrid version, so the only engine option is the 2.5L 4-cylinder. As soon as passengers enter this trim, they’ll notice the addition of the SofTex-trimmed interior. SofTex is a synthetic leather material which is easy to clean and resistant to liquids.

In the RAV4 XLE premium, there is also an option to upgrade your audio system to Entune 3.0 Audio Plus, which adds an extra inch to your touch screen as well as upgrades the sound system to a JBL with Clari-Fi version. There is also an AWD version of this trim available, which has a starting MSRP of $30,900.

The 2021 Toyota RAV4 Adventure trim has a starting MSRP of $32,900. This trim comes standard with AWD, as it’s designed for someone who wants to take their RAV4 onto more rugged terrain.  The RAV4 Adventure is immediately noticeable by its different front grille that more resembles a Toyota Tacoma. The interior also features a unique orange accent throughout the cabin.

It comes with a towing capacity of 3,500 pounds thanks to the Tow Prep package—which is a huge step up from 1,500 pounds with the other trims. This trim also comes with a higher ride height, 19-inch alloy wheels, black headlight bezels, and fog light surround components.

The 2021 Toyota RAV4 XSE Hybrid is a hybrid-specific trim. There is no RAV4 XSE with a conventional gasoline engine. For a starting MSRP of $33,700, the RAV4 XSE Hybrid is the best option for people who still want a sporty feel to their crossover SUV but also want the fuel efficiency of a hybrid. Also, the exterior features a standard two-tone design of a black roof and a choice between four colors for the body paint.

The RAV4 Limited FWD version has a price of $33,500 and includes front and rear parking sonar. This warns you if you get too close to other objects when parking. Buyers also find different tires from previous trims and chrome outside door handles.

But the interior is where you’ll see the most changes. First of all, the RAV4 Limited includes Entune’s App Suite which allows access to destination search, iHeartRadio, Facebook Places, Yelp, Pandora, and so much more. The sound system also improves with the inclusion of Entune Premium Audio 3.0 with Dynamic Navigation. This adds voice-activated HD radio technology, a standard 8-inch touch screen, six speakers, Dynamic Radar Cruise Control, and predictive traffic. Drivers will also find little niceties like a leather-trimmed shift lever and an auto-dimming rearview mirror. An AWD version is available for $34,900.

Like on other trims with a hybrid offering, nothing much changes much in terms of features between the RAV4 Limited and the RAV4 Limited Hybrid. The hybrid fuel economy remains the same at 41 in the city and 38 on the highway. Once again, the hybrid features an electronic AWD as the standard powertrain for $37,295.

A TRD Off-Road model of the RAV4 is forthcoming. Toyota applies the TRD Off-Road branding to factory performance-enhanced models featuring specially tuned suspensions, all-terrain tires, and TRD-exclusive styling features. Look to Toyota’s 4Runner to get an idea of what to expect. While this version of the RAV4 is not currently available, we will update this article with release information and pricing as they become available.

Bollinger B1 and B2 electric trucks look rather different in…