The 2021 Subaru Crosstrek plug-in hybrid charges into the new year with a refreshed face, a retuned suspension, and a $200 price increase to $36,395 including destination, Subaru announced Thursday.

Following the refresh of the gas-only 2021 Subaru Crosstrek, the Hybrid dons a new front bumper with more cladding and larger fog light housings. Subaru says the coils and dampers have been tweaked to improve ride, handling, and steering response. Unlike the larger engine offered in the Sport and Limited trims, the Hybrid comes only in one trim with one available package.

The all-wheel-drive small crossover uses a 2.0-liter flat-4 with Toyota's plug-in hybrid components to make 148 horsepower. The two-motor system features one that works as an engine starter and generator for the small 8.8-kwh battery pack. The other motor powers hybrid and electric driving modes to get 17 miles of all-electric range or an EPA-rated 35 mpg when the juice runs out.

That out-of-date output pales in comparison to the 2021 Toyota RAV4 Prime and its 42 miles of electric range, or the 2020 Kia Niro PHEV and its 26 miles of range.

The gas model gets 28 mpg city, 33 highway, 30 combined with a continuously variable automatic transmission. It starts at $23,295, which is a whopping $13,000 less than the electrified version. But there are a few other cost factors to consider. 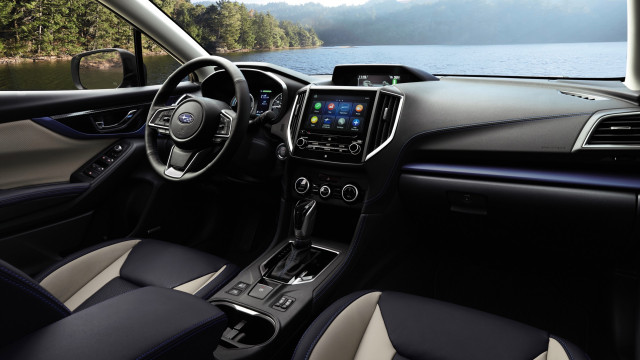 With its standard 8.0-inch touchscreen with Apple CarPlay and Android Auto, keyless entry and ignition, 18-inch black wheels, and slew of advanced safety features, the Hybrid comes similarly equipped as the top Limited trim that costs $29,045. Additionally, Subaru says the Crosstrek Hybrid qualifies for a $4,502 federal EV tax credit, as well as up to $1,500 in state incentives, depending on the state.

Even if shoppers qualify for all those incentives, the plug-in hybrid is still more expensive. And its limited to states adhering to California's zero-emission program to encourage the adoption of vehicles without tailpipe admissions. The Crosstrek Hybrid is available in mostly coastal states.

The Crosstrek Hybrid is the only plug-in vehicle offered by the small but popular automaker, for now. Earlier this year, Subaru announced plans to make hybrids and electrics account for at least 40% of its global sales by 2030, according to Green Car Reports. Subaru's first fully electric vehicle made in partnership with Toyota is expected to be announced late in 2021.

VW ID.4 will get Plug and Charge convenience soon with OTA…