Three-row crossovers have become the hottest thing in suburbia since Five Guys spread across the nation.

The 2021 VW Atlas and 2021 Kia Telluride are two large popular family crossover SUVs with lots of space for families. The former keeps things simple while the latter punches above its price class in top trims. The Atlas is the automaker’s largest vehicle and received a fluff and buff of the smallest order for 2021. The Telluride launched new for 2020 and moved Kia into a league some never saw coming.

If there’s any confusion about their intentions, they begin and end with their names. The Atlas? Big enough to carry a family with a world of cargo. The Telluride? Plush enough to look at home in a tony Colorado mountain town.

Which one is right for you and your family? Our TCC Ratings indicate a relative landslide for the Kia over the Volkswagen—7.5 versus 5.8—but the the reality is closer than the numbers suggest.

MORE: Read our full reviews of the 2021 Kia Telluride and 2021 Volkswagen Atlas 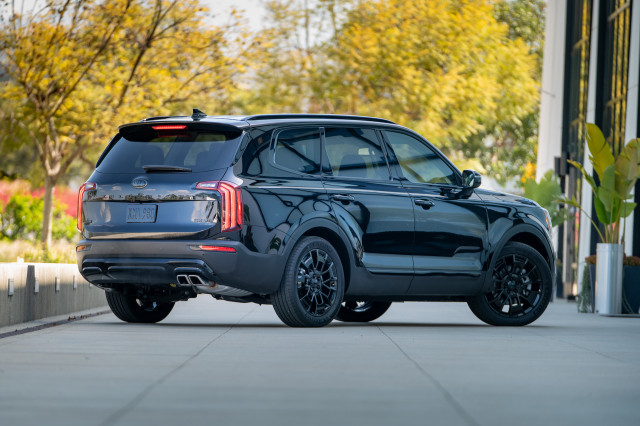 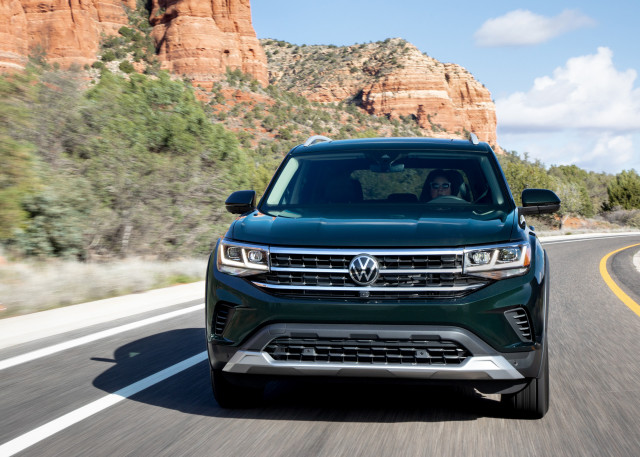 Among three-row crossover SUVs, the VW Atlas looks less exciting than math homework—it’s by design. The Atlas started VW down the path for its current crop of crossovers that includes the Tiguan, the Atlas Cross Sport (which is related to the Atlas), and the new Taos. VW needed to adapt its shape to various body sizes, which is not an easy task with wild curves. The clean lines and simple curves of the Atlas are classic VW—and not many of their designs have aged poorly, though they might put you to sleep faster than revisiting the quadratic formula.

In contrast, the Kia Telluride looks nothing like the rest of the Kia lineup. It’s a gamble that paid off. So much so that Kia couldn’t build the big three-row people mover fast enough. The Telluride is related to the Hyundai Palisade but the two look very different. The Telluride looks tougher, more angular, with more masculine lines and a hint of last-generation GMC Yukon in the front end with those upright headlights. 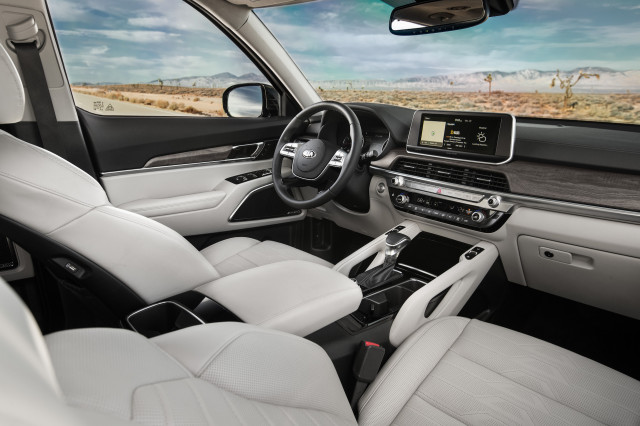 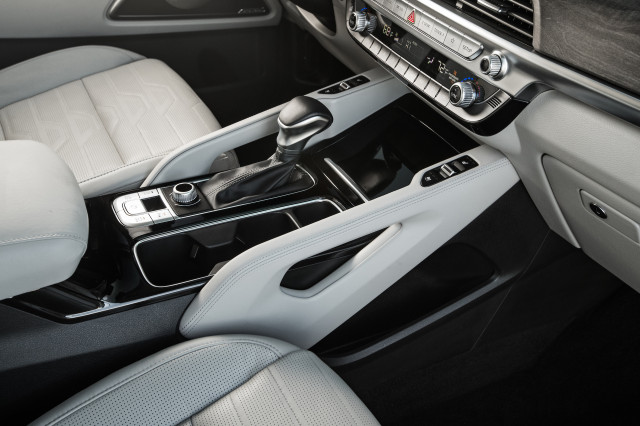 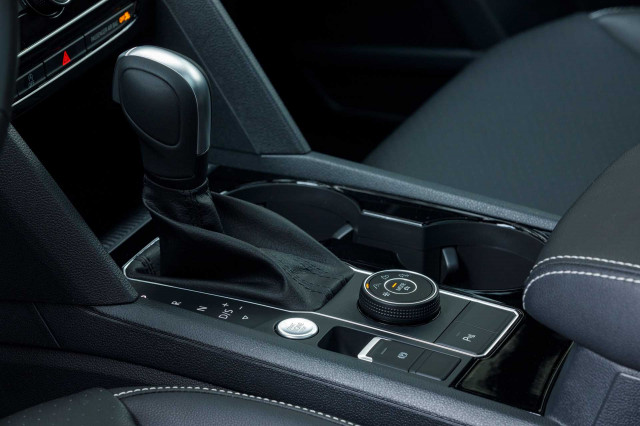 Inside, the Telluride widens its lead with a sharp interior shod in synthetic or real leather. It looks like it costs far more than it does and is filled with very user-friendly tech.

In stark contrast, the interior of the Atlas is nothing if not utilitarian. The VW has nearly as much tech inside as the Telluride, but its plainer presentation hardly feels special or on display. 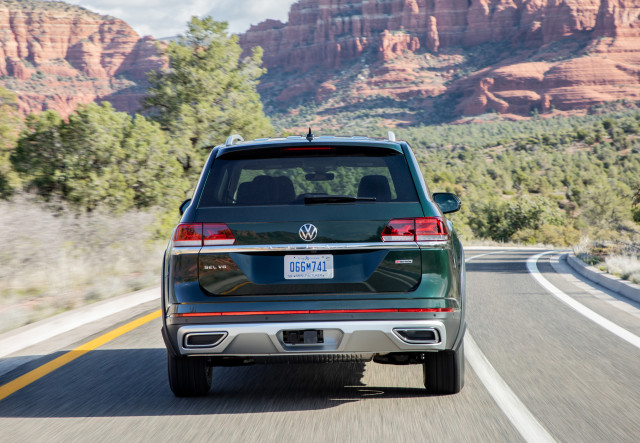 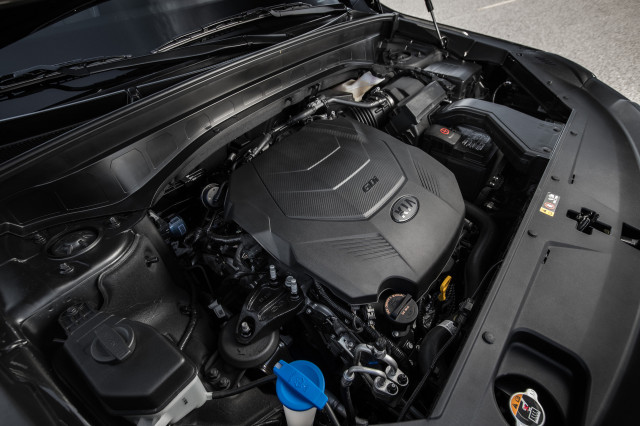 Under the hoods of the Telluride and Atlas, most shoppers will find V-6 engines that make similar power. The Telluride’s 3.8-liter 291-horsepower V-6 is paired to a slick-shifting 8-speed automatic that drives the front wheels, or all four wheels when optionally equipped. The Atlas’ 3.6-liter V-6 makes a similar 276 hp, driven through an 8-speed automatic to power the front or all four wheels. (VW makes available a 235-hp 2.0-liter turbo-4, although we’ve only had brief drives in those models, which are geared mostly toward sun-belters that don’t require an all-wheel-drive vehicle.)

Both V-6 engines are tasked with lugging more than two tons of crossover before fuel, passengers, pets, cargo, Cheerios, iPads, snacks, and juice boxes are aboard. Fully laden both crossovers feel confident but very heavy. Both are rated to tow up to 5,000 pounds, when properly equipped, and we’ve only hooked a trailer up to the Atlas Cross Sport. It was basically 5,000 pounds worth of boat, trailer, fuel, and fishing gear. It did what was asked of it, but the smell of burning brakes was everpresent and passing power was non-existent. The Telluride can be had with a rear air suspension to level things out and it might fare slightly better than the Atlas in this situation.

It’s a coinflip for what’s better behind the wheel. Both steer confidently but lean into corners, and the Atlas and Telluride both keep pace with traffic but won’t win any drag races. The Telluride’s all-wheel drive system features a center locking differential that can lock the power split 50:50, which is a neat trick and one the Atlas, along with the rest of the competition, simply can’t touch.

The EPA says the Atlas returns combined mileage in the high teens and the Telluride in the low 20s, which may speak to VW’s relatively older engine design more than anything else. 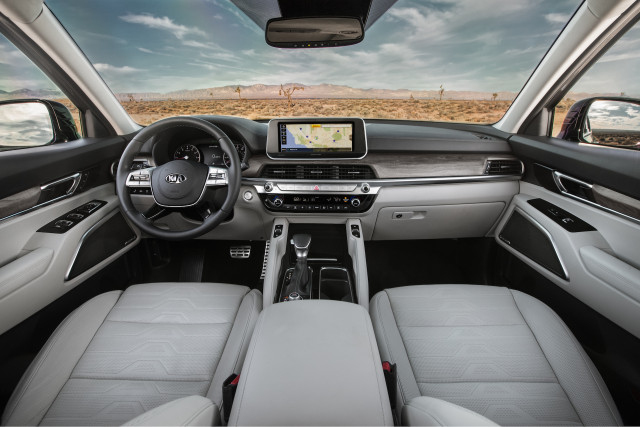 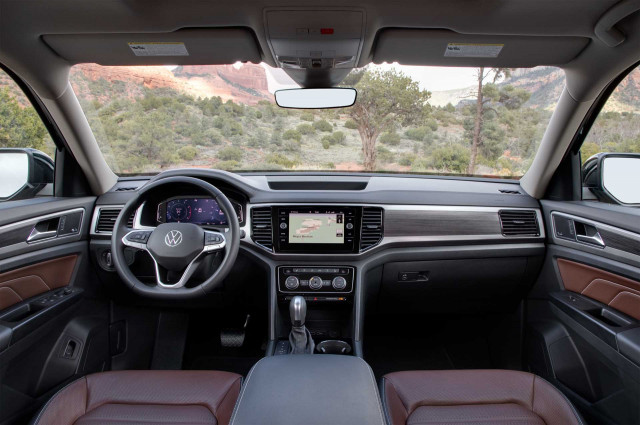 The Atlas and Telluride trade on available space for seven or eight passengers, respectively, with room for cargo.
The Atlas rides on a wheelbase that’s about three inches longer than the Telluride, but both SUVs span about 198 inches from bumper to bumper.

Between the two, the Telluride uses its available interior room better. The first two rows are spacious and comfortable for long legs, with more than 40 inches of leg room available in the second row The third row in the Telluride is good for small children who don’t require car seats, although only two will realistically fit back there, even if there are three seatbelts. The second row can be a bench or captain’s chairs, depending on the configuration. With all three rows in place, the Telluride can hold up to 21 cubic feet of cargo—although that space is mostly vertical. With the third row stowed, the Kia holds 46 cubic feet of gear.

The Atlas and Telluride’s interior space is nearly identical, but VW affords more leg room in the third row than Kia (33 inches vs. 31 inches), which we’re not sure will be as useful. The Atlas only seats two in back, which is more practical, with a second-row bench standard or captain’s chairs optional. The cargo capacities are nearly identical. The Atlas seats six or seven, while the Telluride can squeeze in up to eight passengers.

Both crossovers make automatic emergency braking and blind-spot monitors standard on all models, but Kia goes further with adaptive cruise control and active lane control standard on all trims. VW makes both optional.

The Atlas crashed well but did not earn any awards. The Kia crashed well and was named a Top Safety Pick by the IIHS, but the award only applies to the SX edition and EX models with the optional LED headlights.

The Telluride and Atlas draw closer in features, although top trims of the Kia outrun the Atlas. The base Atlas S costs a hair under $33,000 and includes cloth upholstery, a 6.5-inch touchscreen for infotainment, Apple CarPlay and Android Auto compatibility, active safety features, and 18-inch alloy wheels. Opting for all-wheel drive drives the price up to about $35,000, but also adds weight without adding power to the already stressed turbo-4.

For our money the win goes solidly to the Telluride as it offers nearly everything one can get in the Atlas for the same or less money. It’s not only a solid value, it’s tempting luxury buyers into Kia showrooms which is something to write home about.

considerably at the top end where the Telluride may tempt luxury buyers.

How to Sell F&I Products Remotely

Hyundai and Apple, Geely and Baidu, Lucid and Saudi Arabia:…