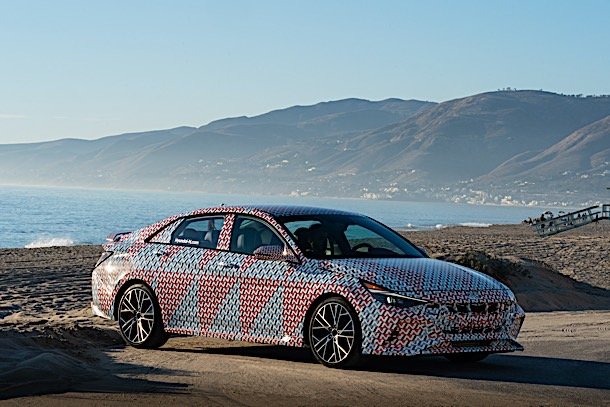 While the world seems to be abandoning small cars, Hyundai is committed to making them and making them great. How great? We spent some time in the entire lineup of Elantras recently to find out, including special access to the new Hyundai Elantra N.

(Full disclosure: Hyundai wanted me to drive the new Elantra so they flew me to Los Angeles, secluded me in a hotel room, and only let me out to drive the cars, including a couple of solid hours in the Elantra N prototype.) 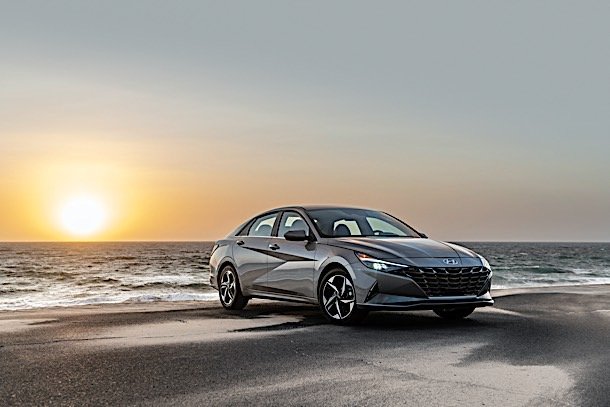 The mainstream Elantra is powered by a 2.0-liter four-banger making 147 horsepower and 132 lb-ft of torque. Hyundai brands it as Smarstream, and it’s paired to a continuously variable transmission. Power runs to the front wheels. The standard car also makes do with a torsion beam rear suspension.

While most looking at this car aren’t looking at it for driving excitement or engagement, the Elantra sedan is reasonably adept at handling the twisty roads around Malibu. The car feels plenty powerful for the daily commute, and the transmission isn’t as sloppy as some CVTs I’ve driven. I wouldn’t seek out a twisty road with it, but if I happened to stumble across one there are worse cars to be in. 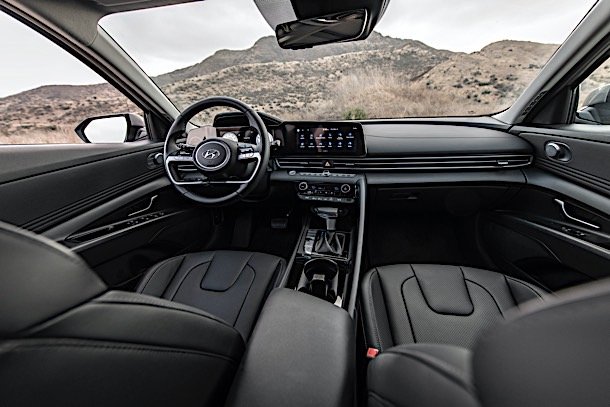 The Elantra is available with loads of tech, including two digital displays (one for the infotainment and one for the instrument cluster) and features Hyundai’s advanced safety systems. Adaptive cruise and lane centering, mated to Hyundai’s highway driving assistance program, make the Elantra a capable long-distance cruiser. In fact, I’d venture to say that Hyundai’s lane-keeping is more intuitive and has fewer false alarms than even Tesla’s standard Autopilot setup.

And before the Tesla fans rip me in the comments, I have a Tesla Model 3 that I have access to daily.

The trunk can swallow up 14.2 cubic feet of luggage, which isn’t bad for the class. While I would prefer the car in hatchback form, the sedan is capable of delivering what most people need. In the Limited trim that I sampled, the EPA rates the fuel economy at 31 mpg in the city, 41 mpg on the highway, or 35 mpg combined. 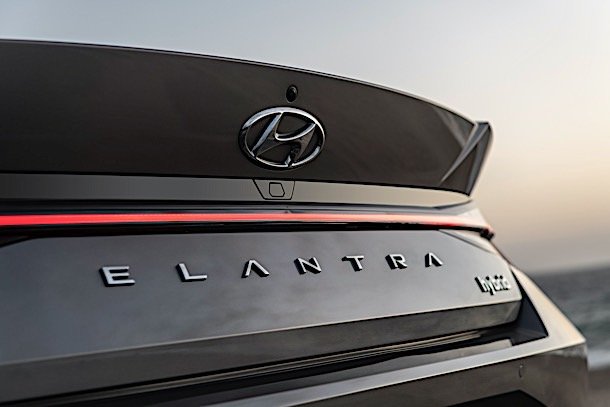 If you want more MPGs, you’re going to want to upgrade to the Elantra Hybrid. It’s powered by a 1.6-liter Atkinson Cycle engine making a total output of 139 horsepower and 195 lb-ft of torque. Power is also sent to the front wheels, but this time via a six-speed dual clutch automatic. Additionally, and thankfully, on the hybrid the rear suspension gets a multi-link independent setup.

There are more options available on the hybrid, including ventilated seats on the Limited Hybrid. Trunk space remains the same on the hybrid.

Around town, it’s a competent cruiser. On the highway, there’s a bit more cabin noise than I’d like, and the seats are a bit hard for longer journeys. I’m not sure why seats would be different in the gas model compared to the hybrid, but I assume it’s due to lightweighting efforts. Unfortunately, I couldn’t get as comfortable as I would’ve liked.

While I had every intention of hopping in the N-Line for the return trip to the hotel, a representative from Hyundai pulled me aside to let me know that I was to take one of the full Elantra N prototypes back to the hotel. Who was I to argue with that?

For the sake of being a completist, I’ll mention that the N-Line is available with a manual transmission, has the independent rear suspension, and makes a healthy 201 horsepower and 195 lb-ft from its turbo engine. The Elantra N was completely wrapped in camouflage, which definitely attracts attention. It contains the same powertrain as the Veloster N, which means a turbo four making 276 horsepower and 289 lb-ft of torque. Power is sent to the front via either a six-speed manual transmission or an eight-speed wet dual-clutch automatic. My test car was equipped with the latter.

From the moment you press the engine start button, you know you’re in for a ride. The engine burbles to life, just like the Veloster, and there is a litany of driving settings you can change to make the engine louder and more obnoxious.

Blasting down Decker Canyon Road north of Malibu, the Elantra N impresses. No matter how fast you seem to be going, the car grips the road and brakes well. Turn-in is quick, but not darty as it can be on some higher-end cars. The transmission, left to its own devices, shifts quickly and nearly exactly when you want it. 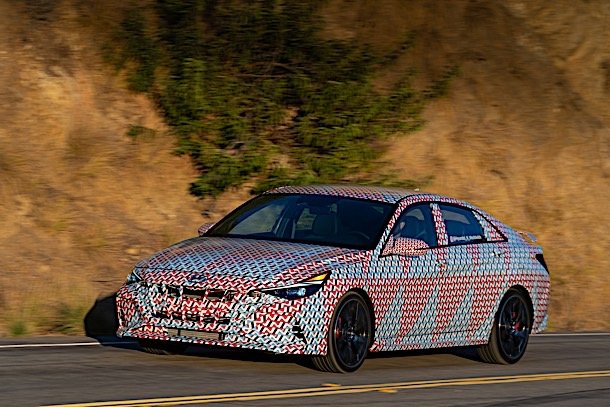 It’s not as good as a Porsche PDK box — nothing is — but it’s far better than any transmission has any right to be in a commuter car turned road racer. I’d still go for the manual transmission but if you need the automatic, you won’t be disappointed.

The longer wheelbase compared to the Veloster helps both with high-speed stability and regular ride comfort. The car is still stiffly sprung, but it didn’t feel jittery. Comfort mode smooths a lot of it out, but it’s not Lexus smooth. It’s a bit easier to live with every day than the Veloster N. 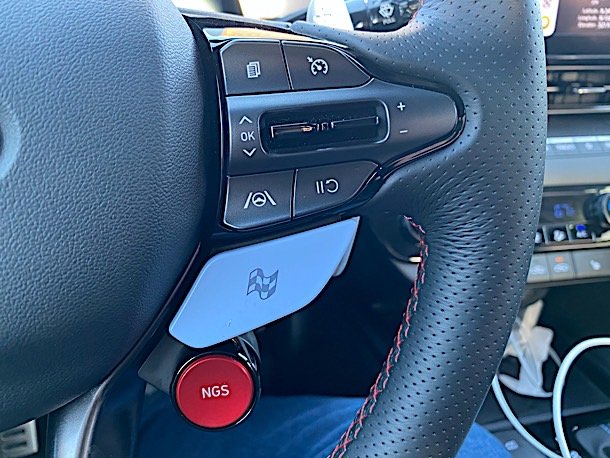 Even if you’re putzing along in comfort mode and want to be aggressive for a few seconds, the Elantra N has an NGS button. Like a “push to pass” style button, the N Grin Shift mode puts the car in full attack mode for 20 seconds, and there’s even a countdown clock on the digital instrument cluster. Is it silly? Yes.

But the whole car is silly. From the minute I started driving it was laughing and giggling. It’s a truly fun car to drive. It’s not as precise as a Honda Civic Type R, but it takes itself way less seriously. But unlike a Fiat 500 Abarth, which is all giggle and no real solid performance, the Elantra N gets you about 90 percent of the way to the Civic Type R in performance.

It’s silly, but in all the right ways. It’s a daily driver that turns sports car. It’s loud. It’s raucous. It’s a hell of a lot of fun. Sign me up.

Why Every Dealer Needs a Post-Sale Vehicle Service Contract…

Land Rover Defender of the Faith

This Innovative Fueling Solution Promises To Save Your…