Neither of these models stray far from a formula that has made the compact crossover the most popular vehicle segment in the U.S. Both have silhouettes that snap to SUV norms, with requisite faux-rugged lower-body cladding framing softly contoured, even graceful sheet metal. If you read between the lines, the Escape is the one that looks the most like a passenger car—with some great curb appeal in the city—while the RAV4 has the look of a rakish 4Runner apprentice this time around. Inside, the same generalization holds, with the RAV4 aping some of the look and layout of Toyota SUVs while the Escape’s interior feels carlike, albeit a bit drab in materials and hues. Five-passenger space inside—if you squeeze a bit in back—and seats that fold forward to fit big-box store purchases are part of the package in these very functional, spacious compact crossovers.

For both of these models, it’s the way in which they juggle gasoline, hybrid functionality, and usable electric-only range that makes them such versatile machines. Between the Toyota and the Ford, they each make somewhat different choices that may affect which you prioritize over the other.

The Escape Plug-In Hybrid, which we haven’t tested yet, will be powered by a 2.5-liter inline-4 engine, configured as part of Ford’s two-motor planetary-gear hybrid system that’s been used in former versions of the Escape Hybrid and plug-in-hybrid Energi versions of the C-Max and Fusion. Total output is 209 horsepower, and the 14.4-kwh battery pack will charge up in about 3.5 hours on a 240-volt Level 2 charger. 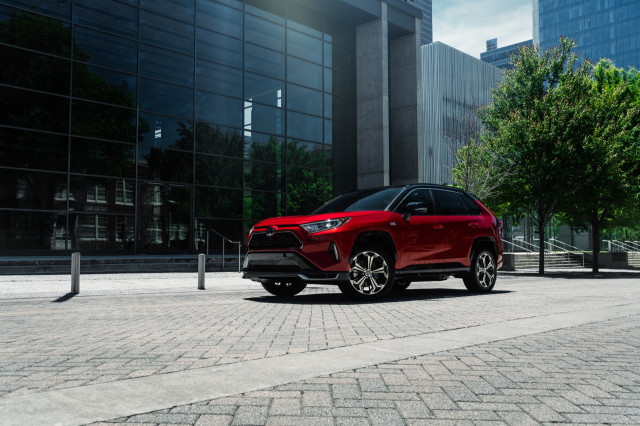 The RAV4 Prime follows a formula that’s different in two key aspects. One of them is power. Although it also has a 2.5-liter inline-4 engine, it gets bigger motors than the RAV4 Hybrid, including a third motor added at the rear wheels, to provide a combined output of 302 horsepower.

As such, the Toyota RAV4 Prime also makes a strong argument for plugging in, in a way that people who aren’t sold on the efficiency side will appreciate: better performance. Bolstered power electronics for the rear motor give it an almost muscle-car responsiveness off the line. With a conservative 0-60 mph time of 5.7 seconds (it feels quicker), the RAV4 Prime is the quickest model in the Toyota lineup behind the Supra.

The second key difference between these two models is that the Toyota RAV4 Prime has all-wheel drive, while the Escape Plug-In Hybrid will be front-wheel drive. 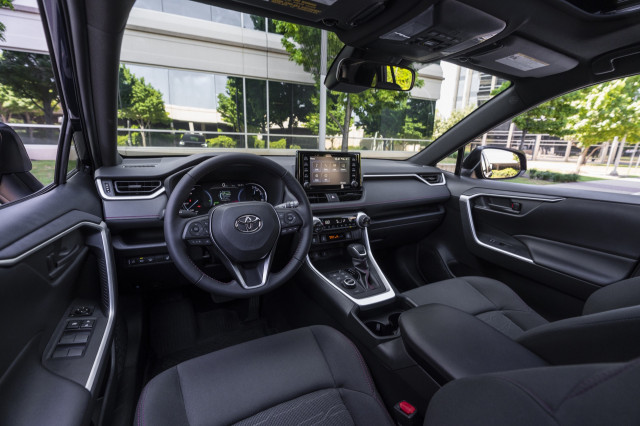 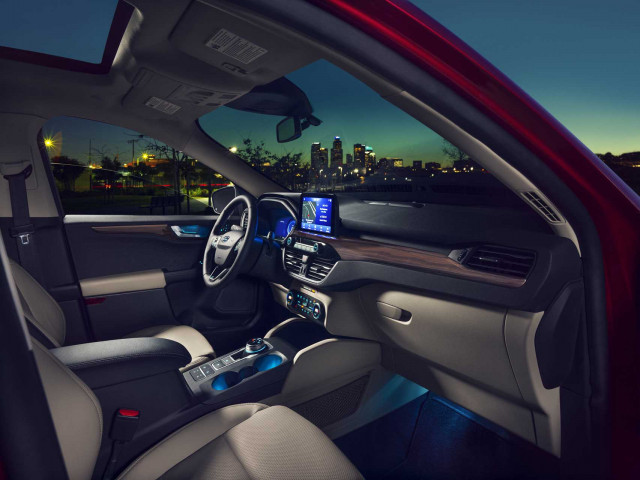 They both have a mode that allows charging the battery into its plug-in capacity while driving—so as to plan ahead for more all-electric driving when you get into a city, for instance.

Warranty coverage between the two compares closely; both come with a 3-year/36,000-mile basic warranty and a 5-year/60,000-mile one for powertrain.

The Escape Plug-In comes in SE, SEL, and Titanium models. Pricing for the 2020 model year started at $34,285, including a $1,245 destination fee. That model never arrived, and Ford hasn’t re-upped pricing for 2021 yet. SE models started with a 6.0-inch touschsceeen while SEL models added a panoramic moonroof, fog lamps, and a hands-free tailgate. The top Escape PHEV Titanium gets Bang & Olufsen audio, leather seats, wireless charging, and a 12.3-inch touchscreen and starts over $40,000. 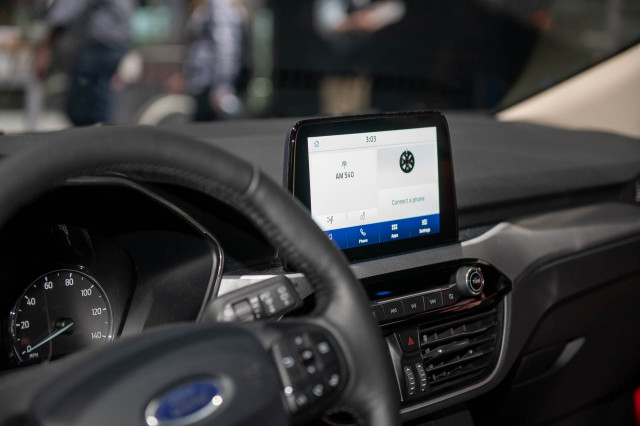 Toyota also makes touchscreens one of the reasons shoppers might move up to a higher-trim model. The Prime SE starts at $39,220 and comes with an 8.0-inch touchscreen, while the upmarket XSE gets a 9.0-inchversion. There’s a lot more to add on the XSE, though—heated-and-ventilated front seats, a head-up display, adaptive front headlamps, JBL premium audio, and heated rear seats—so the Prime XSE can add up to nearly $50,000. 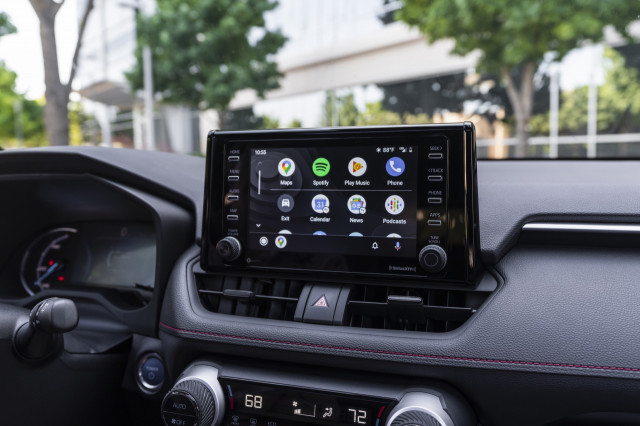 These models aren’t easy to find—or, in the case of the Escape PHEV, even possible to find. After an initial rollout in extremely tight supply, Toyota is making no more than 20,000 RAV4 Primes available to Americans per year—less than 5% of RAV4 annual sales. The Ford Escape Plug-In isn’t yet at dealerships after a series of delays, but Ford assures us it’s due this calendar year, potentially as a 2022 model, though. 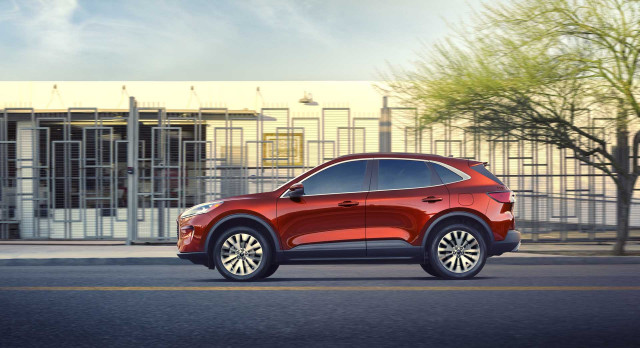 Both of these are fringe players in big, bestselling lineups. The 2021 Escape lineup as a whole earns a 7.0 overall rating, headlined by its top-notch safety ratings, great outward visibility, and standard automatic emergency braking. The 2021 RAV4 lineup earns a 6.5, with less impressive safety ratings and a lower rating for performance, in our ratings system that bases scores by the most popular, mass-market versions. 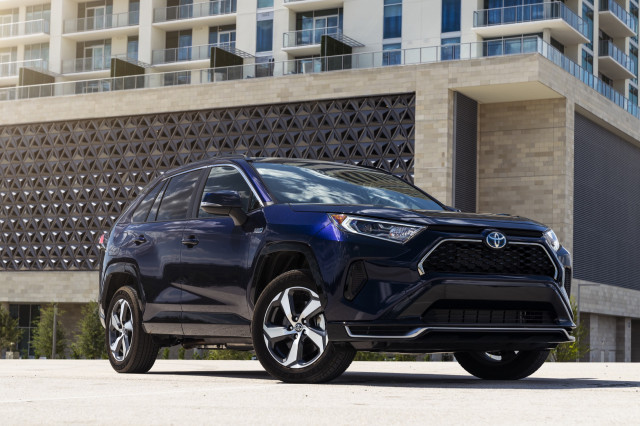 Although we haven’t driven the Ford yet, the Prime is looking like the early winner here. Because of the way Toyota has configured the RAV4 Prime—around performance, efficiency, and the idea that it can serve so many wants and needs—it’s one of the best ways to sell people on the idea that plugging in might bring a better future.

Taking a Multi-Tiered Approach to Fight the Growing Ways…