The 2021 Chevrolet Blazer mid-size crossover SUV earned "Good" safety scores across six crash tests performed by the IIHS, but missed out on a Top Safety Pick award due to subpar headlight scores, the IIHS announced Tuesday.

It's the first time the Blazer has been crash tested by the insurance-industry funded non-profit since it was resurrected for the 2019 model year. The results apply to 2021, 2020, and 2019 models. The sterling crash results mirror the top five-star rating issued by the NHTSA.

In addition to withstanding crash tests, the 2021 Chevy Blazer's automatic emergency braking system was effective in simulations where it avoided crashes with other cars at speeds of up to 25 mph, and it reduced speeds to mitigate damage to pedestrians in crash testing. Unlike most competitors, automatic emergency braking does not come standard on the 2021 Chevy Blazer, and it's not even offered as an option on L and LT models. 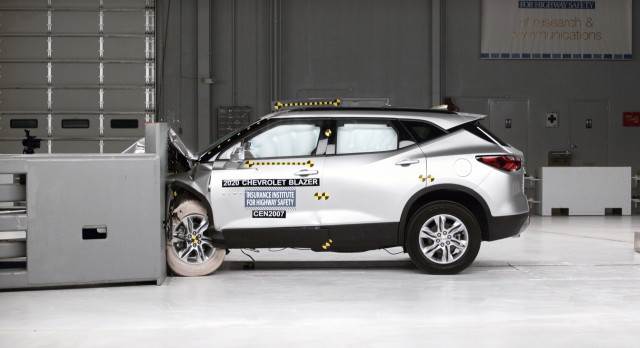 Mid-size SUV competitors such as the 2021 Ford Edge, 2021 Hyundai Santa Fe, and 2021 Volkswagen Tiguan are equipped with AEB standard and had good enough headlights to earn Top Safety Pick awards.

To qualify for a TSP award, the vehicle must have "Good" or "Acceptable" headlight ratings on at least one trim. The 2021 Blazer comes with three headlight options, and the top LED projector headlights with automatic high beams earned a "marginal" rating because of weak illumination in curves. The high-intensity discharge lights on other models had the same issue, but were rated "Poor" due to excessive glare in the eyes of oncoming cars.

Automakers have sometimes upgraded the headlights mid-year to correct shortcomings and qualify for a TSP award, which is coveted by automakers and their marketing departments.

Lordstown Motors Cuts Production Estimates By More Than Half

Trainers in the Spotlight: Learning From 2020 to Succeed in…